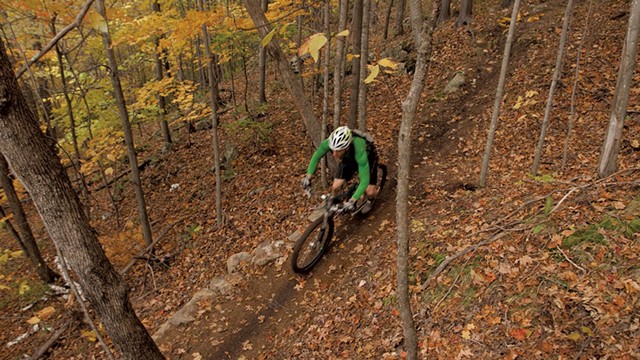 Vermont can boast hundreds of miles of single-track mountain bike trails, most managed by the 27 chapters of the Vermont Mountain Bike Association. Regional clubs from Bennington to Montgomery maintain spaghetti-like clusters of trails, but there's little or no connectivity between them.

A new VMBA chapter, the Velomont Collective, has the ambitious goal of connecting Vermont's bikeable trail networks from the state's southern border to its northern one, supported by a network of huts along the way. This would create an opportunity for residents and visitors alike to take multi-day rides and even bike the length of the state.

A trail spanning the length of Vermont isn't a new idea. The Long Trail, an end-to-end hiking trail, and the Catamount Trail, a Massachusetts-to-Canada Nordic ski trail, provide recreation for thousands of outdoor lovers each year, allowing them to traverse the state on their own power.

Both trails are relatively remote, only occasionally dipping into a town or village. Vermont's new end-to-end bike trail, the Velomont Trail, would differ: Its creators aim to connect existing trail networks and pass through at least 30 towns and villages, bolstering local businesses and economies along the way. While the trail would be purpose-built for mountain biking, it would also welcome walkers, runners and other nonmotorized users.

In conjunction with the Vermont Huts Association, the Velomont Collective will break ground this summer. The long-range goal is to complete the trail and supporting huts by 2030.

The collective is still in the planning and outreach phase for much of the trail, and its success will depend on parcel-by-parcel negotiations with landowners, permit acquisition and an Act 250 jurisdictional opinion. Should the herculean undertaking come to pass, the Velomont Trail would connect the networks of at least 19 mountain bike chapters.

According to Caitrin Maloney, the Velomont Collective's board president, the trail began as a harebrained, grassroots idea — a pipe dream to connect pods of trails from Rochester to the Mad River Valley so mountain bikers could go on really long rides.

The goals have expanded and evolved, and the Velomont Trail has become as much about providing statewide riding as about creating more opportunities for beneficial nature experiences — and making a meaningful contribution to Vermont's economy.

The trail would eventually have 30 to 45 backcountry shelters, owned and managed by Vermont Huts, along its corridor with opportunities for camping. There would be lodging options in towns and villages, as well.

"By building Velomont, we're connecting rural communities to trailheads," said RJ Thompson, Vermont Huts' executive director. "Velomont will weave in and out of the forest and Vermont communities, giving Vermonters direct access to the trail and the opportunity to spend a night in a hut in the woods."

"More access to trails is a health and wellness benefit for Vermonters, as well as fun," Maloney said. "And trail connectivity will also create opportunities for conservation, as the Long Trail and Catamount Trail did."

As a senior project manager for the Trust for Public Land, a conservation nonprofit, Kate Wanner agreed. She noted, "Our efforts to permanently conserve Rolston Rest, the largest private inholding in Green Mountain National Forest, will be leveraged by the new proposed hut and trail infrastructure improvements."

"For me, it's always been about: How can we connect Vermont's unique communities?" said Angus McCusker, the Velomont Collective's volunteer executive director. "There is a misperception that mountain bikers want to create trails everywhere. That would be terrible land management, and it's not what we want. Wildlife fragmentation is an issue in Vermont. Untouched land has high value, too."

Holly Knox is a recreation program manager for the U.S. Forest Service in the Green Mountain National Forest, which is providing oversight on those sections of the trail. She noted that public lands have seen increasing recreational use in recent years, especially during the pandemic.

"As public land managers," Knox said, "it is our role to balance this demand, and the opportunity it presents to educate visitors and foster future generations of land stewards, with the potential for natural resource and social impacts.

"Through our partnerships and projects like the Velomont," she continued, "we are able to diversify what we offer and connect to a broader audience of people to share in this land stewardship ethic."

There are no other long-distance mountain bike trails in the Northeast — indeed, there are few in the world. While Velomont would likely become a riding destination heavily used by locals, those creating it also expect the trail would draw bike tourists from around the globe.

Studies have demonstrated that mountain biking bolsters rural economies. In 2017, Outside magazine published a story headlined "How Mountain Biking Is Saving Small-Town, USA," noting that, in a "survey of more than 1,400 cyclists from across the country, 62 percent of mountain bikers travel to ride, make an average of two trips a year, and spend about $382 per trip." As the climate changes and the snow-sports season becomes shorter and less predictable, Velomont could bring crucial tourism dollars to the Green Mountain State.

A study conducted by Burlington's SE Group analyzed the potential financial impact of the Velomont Trail and hut network, once completed. The firm estimated that the network would draw 16,000 to 36,000 annual visitors who could generate $3.5 million to $6.2 million in annual sales activity. This could result in $385,000 to $685,000 in Vermont tax revenue and 51 to 91 full-time jobs.

What makes Velomont even more unusual, Thompson said, is that no other long-distance trail in the U.S. was designed to capitalize on existing trail infrastructure. This includes adding trailheads in town centers, which would let users take multi-night excursions without having to drive somewhere or coordinate car shuttles.

A multi-night biking adventure might sound like something only advanced riders would tackle. But the connecting trails are intended to be intermediate and as accessible as possible; some sections would accommodate adaptive bikes. 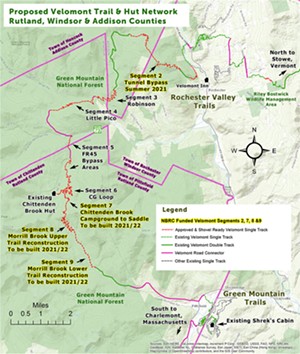 More than 84 percent of land in Vermont is private, which means that landowners are key partners in developing mountain-bike-specific and multi-use trail networks in the state. Kingdom Trails in northern Vermont, for example, exists on the properties of nearly 100 private landowners.

Three withdrew their trails from that network in December 2019. In a statement at the time, Kingdom Trails acknowledged that "challenges and tension points exist around traffic, congestion and pedestrian safety of residents and visitors alike."

The Velomont Trail would rely on the goodwill of landowners, as well as partnerships with state and federal foresters, like Knox, who manage Vermont's public lands.

Collaboration is already under way. In November 2020, the Velomont Collective received a grant for $526,375 from the Northern Border Regional Commission, which invests in economic and infrastructure projects.

The grant will help pay for the construction of 10 miles of trail in Chittenden, Rochester and Hancock, as well as a proposed four-season, ADA-accessible backcountry hut in Chittenden. The Town of Killington, the Trust for Public Land, Vermont Huts and the Rochester/Randolph Area Sports Trails Alliance collectively have pledged $283,500 in matching funds.

"Velomont is a bottom-up, not a top-down, initiative," McCusker said. "The people who manage local trails know the local landowners and can address issues that arise ... The collective's biggest wins so far are the partnerships forming behind a statewide vision."

"State and federal foresters have been critical partners in the project and the vision," Thompson added. "Without their support, it wouldn't be possible to connect trail networks."

As a result of good relations and responsible management, the Velomont Collective was granted permission to build a mile of trail in one of Vermont's Wildlife Management Areas last year, which in the past have only accommodated recreational fishing and hunting. After five years of discussions, the WMA and Velomont agreed to establish a trail on Randolph Gap.

The existing logging road was a steep, unmaintained trail too precipitous to bike up, and it was highly prone to erosion. "We identified a route for a sustainable single-track within the existing corridor," McCusker said. It's a pilot project for Vermont that, so far, has been a success, he said.

The Velomont Collective will break ground on the first 10 shovel-ready miles this summer. Initial trail development and construction will focus on central and southern Vermont, starting near Killington and expanding north and south. The first stretch of the trail will be four miles from Rochester Village to the west, and from the first built corridor hut, Chittenden Brook Hut, toward Pittsfield. Northern Vermont will be the last phase of the project.

"We're doing our due diligence, planning the trail to be sensitive to natural resources, wildlife, ecology and communities," Maloney said.

Building an end-to-end trail in a state where the majority of land is privately owned is extremely ambitious. So is constructing dozens of huts along the way. The second corridor hut will be constructed this fall and open before year's end. From there, Vermont Huts expects to build five or six huts a year.

The project is mostly a volunteer effort. While it may take most of a decade to complete, the Velomont Collective and Vermont Huts welcome Vermonters to get involved. Over the coming years, there will be ongoing opportunities to move some rocks or swing a hoe. Businesses on or near the proposed trail are invited to ponder how they might tap in to the mountain biker market.

"We will attract new people to the state, but we're committed to opportunities for locals and creative programming for a more equitable outdoor experience in Vermont," Thompson said. "This project has potential for long-lasting impact ... and for introducing Vermonters to the outdoors, with a sustainable boost to rural communities."

Berne Broudy is a Vermont-based writer, photographer and adventurer. She is a board member of Richmond Mountain Trails, a chapter of the Vermont Mountain Bike Association.