The word "histology" doesn't typically come up in an artist statement. And while feminist artists of the past have not shied away from blunt depictions of female anatomy, few get so intimate as, say, cellular structures in the uterine wall. For Erin Bundock, the microscopic gaze, if you will, is central to her fabric-based creations. Indeed, they fine-tune the meaning of the phrase "body of work."

Bundock, 22, is the recipient of the first-ever South End Arts District studio residency at the Vaults, a mixed-use building on Howard Street. The South End Arts + Business Association, which is sponsoring the yearlong residency, has an office there, as well. The residency officially debuts during the South End Art Hop, though Bundock has been ensconced in her new studio for several weeks.

The recent University of Vermont graduate intends to continue her exploration of sexuality and reproductive health, themes evident in her thesis exhibition, titled "A Stitch Between." Several large fabric pieces from that collection — repurposed bedsheets with figuration and patterning in marker, paint and stitching — adorn Bundock's studio.

Smaller fabric works, including a bold-hued facsimile of a sanitary pad, and drawings on paper are also tacked to the walls. Neatly folded lengths of screen-printed muslin are draped over a drying rack; vibrant screen-printed squares of cloth are arranged over her worktable, like puzzle pieces awaiting placement in future projects. Lacking screen-printing equipment at the Vaults, Bundock said she'll get into low-tech block printing this coming year. 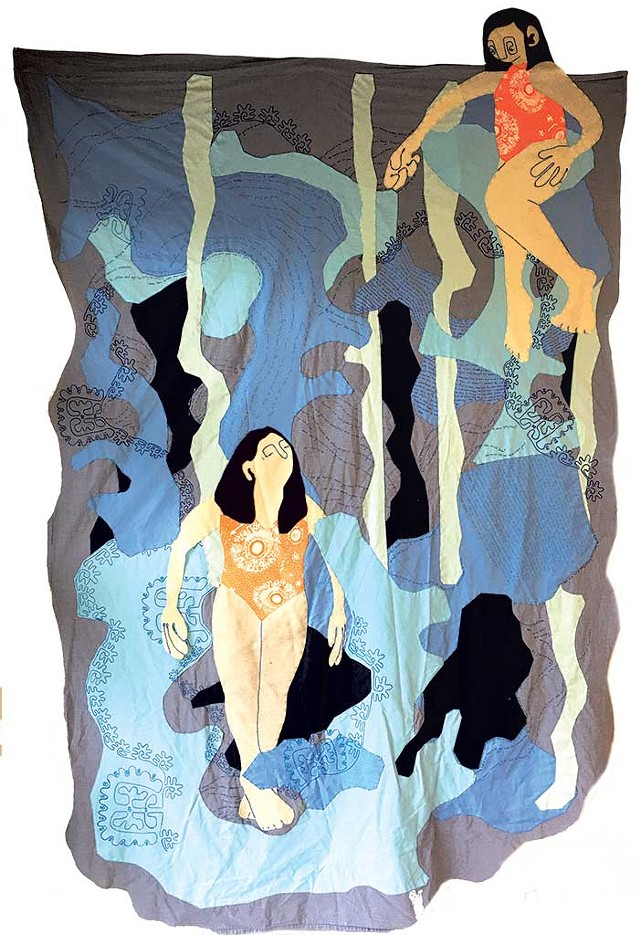 During a recent interview in her studio, which features a garage-style roll-up wall on the west, Bundock further explained the foundations of her art.

"Basically, the work is around conversations we have around human reproductive health and sexuality," she said. "There are questions about sex and abortion ... I started developing these textiles based on histology."

Though these are fairly universal concerns, for Bundock the pursuit isn't just conceptual. "It's personal work, related to my issues around birth control," she said, noting that taking birth control pills caused her to experience complex migraines. She subsequently discovered that her mother had suffered from them, too, when she was pregnant.

This shared health history in part informs the backstory for Bundock's large-scale wall hanging "Letter to My Mother." Two figures — a woman and a younger girl — in orange swimsuits float in a tangle of amorphous shapes in blues and black, each of these patched and stitched onto a larger background cloth. The girl's head "breaks" the surface, extending beyond the upper edge of the piece, as she reaches one hand toward the woman.

In another large wall hanging, titled "Period Shower," two somewhat cartoon-like people stand in said shower, rendered in electrified hues of orange, cerise and blue. Both face the water, its droplets a cascade of blue stitches. The shorter figure, a female, clutches at a black blob in her belly, as the seemingly male taller figure comforts her, touching her back and head.

On the surface, the meaning of this piece might not be clear, but, learning its title, every woman on Earth would "get it."

Knowing and being comfortable with your body is paramount, according to Bundock. "It's important because if you understand your body, you can have more power," she said, referencing both medical and policy arenas. "You can demand that you can make your own decisions."

After talking with her mother and other older women about these issues, Bundock said, "I feel lucky to be in the generation I'm in when there are more open conversations. Having to deal with this stuff is how we move through life."

Bundock's interest in microanatomy isn't random; her mother, Elizabeth Bundock, has had a career as a forensic pathologist. She previously worked as a forensic pathologist in Boston and is now one of two medical examiners for the State of Vermont. Erin's father, Brett Bundock, a scenic designer and freelance carpenter, is ostensibly the artistic inspiration, but Erin said her mother and brother are also creative. The family relocated to Shelburne in 2008.

"This work has influences from both of my parents," Bundock said, gesturing around her studio. "Some [pieces] are like backdrops; my mom is the medical influence."

Exploring figuration stems from her fascination with "what's inside a person and how that is expressed," she commented. And Bundock, a former English minor, appreciates the value of storytelling. "Bringing that to fiber, a comfortable medium in everyday life, that interests me," she said, acknowledging the long history of women's textile-based art and traditional quilting circles.

During her residency, Bundock intends to create more big pieces, which can take months to complete, and more drawings to "widen the pool" of possible narratives. "I'm very thankful for having this space and not having to pay for it," she said. "This is definitely a big win."

Bundock's studio will be open during the Art Hop, with limited occupancy and lots of hand sanitizer.

The original print version of this article was headlined "Cellular Connection | The Vaults' inaugural artist-in-residence, Erin Bundock, looks within"