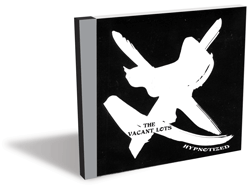 Shortly after the record-setting New Year’s blizzard this year, The Vacant Lots’ front man Jared Artaud sent Seven Days an email saying that he had been wandering the streets of a seemingly deserted Queen City in the very early hours of morning during the storm. “It felt nice to see Burlington differently,” he wrote. “A new lens and something else in the air. Mounds of snow like a vast desert. Stumbling upon visions.” He wrote also that the band was working on material for a new album, their third in little more than a year.

Recorded over two days and mixed the third day, that new record, Hypnotized, suggests the local duo has undergone something of a transformation. So did the note accompanying the handwritten lyrics sheet included with my copy of the album: “Dan, I am undergoing a transformation.” Ahem. All cheekiness aside, Artaud is correct, at least where his music is concerned. The new album from The Vacant Lots boasts previously unseen depth of both sound and vision.

Our peek through the looking glass begins with “Confusion.” Already one of the trippiest local bands around, TVL kick out the psychedelic jams with jangling guitar and hazy sitar drones — presumably via Raagini Tanpura or a similar effects box. That heady sound comes to define the record, lending Hypnotized a swarming, ethereal quality. But it is also indicative of TVL’s general shift toward a fuller, more dynamic sonic palette.

Drummer Brian MacFadyen is especially notable in this regard. His playing, always bombastic, is now refined. He still attacks with furious intensity. But his percussive melees boast added precision, giving Artaud’s serpentine guitarwork some backbone. On “Love” his vibraphone work lends a chilling immediacy.

Artaud remains a brooding and often cryptic writer in the vein of Messrs. Ginsberg, Burroughs and Kerouac. But he seems particularly enamored with contrast — a fact perhaps evidenced by the album’s cover, a reverse image of TVL’s self-titled debut. Unlike previous efforts, which matched a grimy, apathetic lyrical bent with equally filthy, detached soundscapes, here the songwriter contrasts dark, searching prose with deceptively bright arrangements.

This contradiction is often striking, adding more potency to the band’s swirling sonic storm. Particularly on cuts such as “Man,” “Abyss” and “When the Lord Comes,” the tempestuous interplay between MacFadyen and Artaud’s shimmering musical designs and the latter’s haunting vocal work is fascinating.

Album closer “Revolution” is a gruesome, 21-minute epic. While not for the faint of heart — or the short on time — it reduces the material to its most basic elements: pulsing percussion, dizzying guitar and visceral, almost unintelligible howls. It is seductive and hedonistic and, of course, hypnotizing.

Hypnotized by The Vacant Lots is available at Burlington Records and online music retailers such as iTunes.