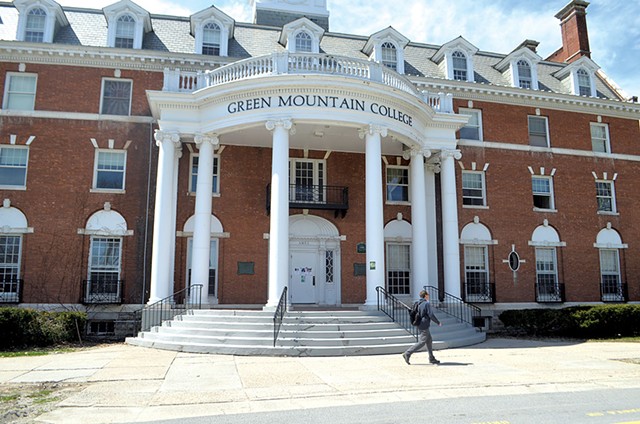 Vermont's ailing higher education sector has gotten a cash injection from an unlikely source: the U.S. Department of Agriculture, which has approved low-interest loans of $94.2 million to five private schools during the past six years.

The money doesn't guarantee a school's survival. Two colleges that received loans are shutting down, and it's unclear whether they'll repay Uncle Sam. The College of St. Joseph in Rutland, set to close this month, borrowed $2.4 million and still owes $1 million. Green Mountain College in Poultney, which will cease to operate shortly after its final commencement May 19, owes $19.5 million. The school's administration put its $20 million campus up as collateral for the loan.

Vermont Law School in South Royalton owes $17.7 million that it borrowed in 2018, the same year it slashed salaries and eliminated tenure for most of its professors in a bid to erase fiscal deficits.

Goddard College in Plainfield borrowed $2.1 million in 2016. The school's financial problems prompted its accreditor to put it on probation last fall.

Bennington College obtained the largest loan approval since 2013, a package worth more than $50 million.

The schools borrowed through the USDA Rural Development Community Facilities Programs, which have quietly become a national resource for financially stressed colleges. The USDA has awarded roughly $1.7 billion in the past three years in low-interest loans and grants to help rural schools improve facilities and reconsolidate higher-interest debt.

Paul Costello, executive director of the Vermont Council on Rural Development, said colleges bring multiple benefits to rural areas, and government support such as the USDA loans is important.

"A college brings youth, energy and vitality," he said. "It brings well-educated faculty and staff ... and relatively good paying jobs. It brings street traffic in the downtown. It brings people interested in nightlife and entertainment, so it really lifts the spirits."

But the loans have critics — especially among conservatives.

"The USDA should not be the lender of last resort, and that's kind of what's happening," said Daren Bakst, senior research fellow at the conservative Heritage Foundation, a think tank in Washington, D.C. "It's not the taxpayers' role to serve as a bailout to small, struggling colleges."

Green Mountain College's situation shows that "clearly the USDA did not do a very good job in determining whether or not this was a wise loan in the first place," Bakst added.

Green Mountain College announced in January that it would close. The disclosure came only nine months after it received cash from the loan, most of which was immediately used to pay off higher-interest debts. The infusion was meant to pull the school out of a financial tailspin, said Bob Allen, president of the college. Allen arrived at Green Mountain College in 2016 after a long career in business, including 25 years as a senior executive at the Vermont Country Store.

"I really thought I could be instrumental in turning this place around," Allen said glumly during an interview in his office on April 29.

At Vermont Law School, a USDA loan has helped right the ship, at least for now. Its president, Tom McHenry, said Vermont's only law school used its federal loan to pay off higher-interest debt to reduce payments. He expects the school to be in the black next year. "The loan helped us tremendously," he told Seven Days. "We are having no problem making the payments and, given our recent restructuring, we are in a much, much stronger financial situation."

Bennington College, a small private institution with about 735 students, qualified in 2017 for financing totaling $52.6 million — a $47.6 million direct loan from USDA and a $5 million USDA-guaranteed loan through TD Bank. It, too, sought funds to pay off higher-interest debt; it also wanted to finance renovation of its centerpiece building, the Commons, in a bid to attract more students.

The USDA's agreement with Bennington calls for the feds to hand over the $47.6 million upon completion of the Commons project, scheduled for later this year. In the meantime, the college obtained bridge financing from the Vermont Economic Development Authority, its 2018 audit shows.

Bennington College president Mariko Silver would not comment on the loan or the health of the college. She announced on April 22 that she plans to leave the school in July to become president and CEO of the Henry Luce Foundation.

Jennifer Scott, president of the College of St. Joseph, did not return messages seeking comment, nor did Goddard College president Bernard Bull.

They chose not to answer the question: Should taxpayer money be used to underwrite these loans?

Borrowers do get vetted, first by USDA officials in Vermont, and then by their bosses in Washington, D.C., who make the final call. Vermont's congressional delegation cheers on some applications.

In 2017 for instance, Sen. Patrick Leahy (D-Vt.), Sen. Bernie Sanders (I-Vt.) and Rep. Peter Welch (D-Vt.) signed a letter assuring U.S. Secretary of Agriculture Sonny Perdue that Green Mountain College "is an important educational institution and local employer in our state." They explained that the loan it sought would consolidate its debts and save on interest.

Leahy deferred a request for comment to his spokesperson David Carle.

Carle noted via email that the loan was for refinancing. The USDA did not add to the school's debt and is attempting to help colleges deal with rising costs and declining student populations, he wrote.

But even with the financial restructuring, Green Mountain College remained in the red. Last month banners on campus still proclaimed that it's one of the top schools for sustainability programs.

"Calling yourself first in sustainability and then shutting down — how ironic," said sophomore Chriss Davis, a 21-year-old from Delaware, as she dismounted from a bicycle that pulled a trailer full of recycling and compost buckets, which she distributes for her campus work-study job.

Most of the 427 undergrads at the private college must transfer to new schools.

They'll have fewer choices in Vermont. In addition to Green Mountain College and the College of St. Joseph, Southern Vermont College in Bennington is shuttering. The closings will reduce the tally of Vermont colleges from 21 to 18.

That underscores a trend that imperils the state's higher education sector, which accounts for a sizable portion of the Vermont economy. A 2017 report from the Vermont Higher Education Council said colleges drew $1 billion in tuition annually, employed 11,000 people and boasted a payroll of $588 million. A declining number of high school grads in the Northeast has translated to steadily declining enrollment and deficits at numerous Vermont colleges.

Survival of the Smartest: Vermont's Colleges Must Adapt as Pool of Potential Students Declines
By Molly Walsh
Education

Green Mountain College employs 150 people and has an annual $6.8 million payroll. The future of its campus — 22 buildings, including the prominent Ames Hall with its white pillared portico, as well 155 acres of land complete with a goat yard, pigpen and chicken coops — is not known.

Would the USDA foreclose on a small private college such as Green Mountain?

Jon Muise, Vermont area director for the USDA Rural Development program, would not comment. He referred questions to acting public information officer Megan Roush. She said the USDA would not speculate on "hypothetical questions" about a possible default.

State economic development leaders said temporary federal control of the campus could be a plus. The government would safeguard the interests of the community better than a private lender would, said Ted Brady, deputy secretary of the Vermont Agency of Commerce and Community Development. Brady knows the program well: He's a former Leahy staffer who has helped several colleges obtain the loans. He is also a former Vermont director for the USDA Rural Development program.

"The common practice then was that you try to recover as much of the loan and as much of the taxpayers' money as possible while still ensuring you're looking after the best interests of the community," Brady said.

Two groups have made overtures about acquiring part or all of the Poultney campus, including alumni who have banded together with a campaign called SaveGMC. But with closure imminent, no offer with viable funding has been made, Allen said. The college paid its first $635,000 installment on the loan and is not in default — thus far.

The USDA is already starting to act like a landlord, albeit a reluctant one.

"They are anxious. They encouraged us to put it on the market, which we've done," Allen said, noting that the campus is listed with real estate firm Colliers International.

Allen also said that with the USDA's cooperation, the college has contracted with a trustee to oversee the campus after July 1. Massachusetts accounting firm Verdolino & Lowey will help manage the property, Allen said. "The concern in town is, as you could imagine, who's going to cut the grass and maintain the buildings while they are unoccupied."

Students are counting down the final days with a mix of emotions. Davis feels frustrated; she transferred to Poultney five months before the closure announcement. "No one knew," she said. "I almost feel, like, lied to, in a way."

Sophomore Shalako Sharp has no regrets about his time at Green Mountain College. "I wanted to go to the mountains, somewhere beautiful, in nature," said the young man from Louisiana.

Grants covered most of his tuition and he found the professors "amazing,'' including those in his renewable energy and ecological design major.

He's transferring to Prescott College in Arizona, which is one of nine "teach out" colleges that have agreed to accept Green Mountain College students. Sharp said he will move west feeling "so happy that I came here. It's been the best experience of my life."