The Ups, Downs and All-Arounds of Spherical Living 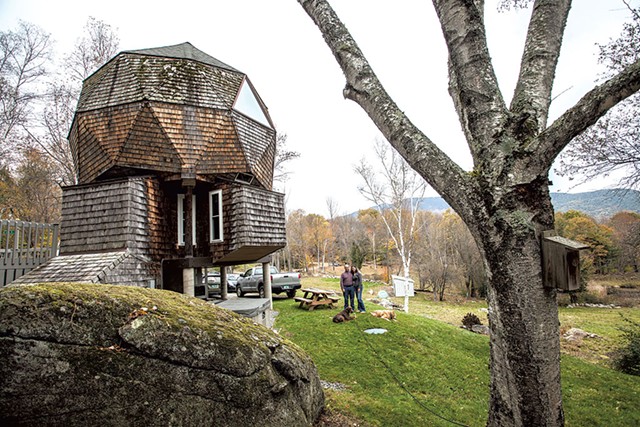 When Mike and Michaela Whitty pull into their driveway in Weathersfield, they often find strangers photographing their house. No wonder: The Whittys live in a geodesic dome house — one of those spherical structures made of interlocking triangular panels that popped up around the country in the 1970s.

In the couple’s quirky example, the sphere sits on a base of radially jutting cubes — their first floor. And the whole cedar-shingled structure is perched atop a thick cylindrical core ringed by five concrete columns on a steep slope of ledge rock. The house is known locally, according to Michaela, as “the spaceship golfball house.” 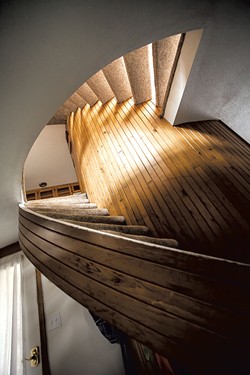 She and Mike, young professionals who work in Hanover, N.H., and Stowe, are the house’s third owners but the first to call it their primary residence. A builder from Connecticut named David Fortin constructed it as a ski house in 1976. Fortin is now 99 and until recently lived next door in a Swiss-chalet-style abode.

When Fortin put the dome house on the market, Yankee magazine ran a story dubbing it “The Weathersfield Wonder” in its February 1977 issue. The house got more press in, perhaps, 1981 — the scribble on the Whittys’ scrapbooked article is faint — in the Boston Globe. Copies of both articles came with the house.

What impressed those writers still impresses today: not just the oddity of the form, but the craft that went into it and its homey feel. The Whittys purchased it in 2006, after a year of house hunting. Michaela recalls, “The second I walked inside, I was like, Yeah, I can live here.” 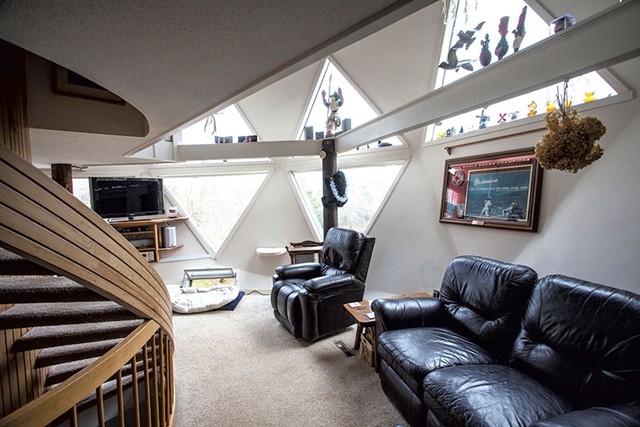 Entry is from a deck on the first-floor level, where those jutting cubes turn out to be a laundry room, a bathroom and two cozy guest rooms. Each of those bedrooms contains a built-in bunk bed and a tiny closet-cum-built-in-dresser. The distance between these two features is barely the width of a person, yet there’s room for a window in each room.

Fortin, a proficient carpenter, built the bunk beds, which originally filled three rooms. (The Whittys converted one to the laundry room and jettisoned the tiny washer and dryer Fortin had squeezed into the bathroom). He also made a fourth bunk for an upstairs loft room (now an office), which sits across from the master bedroom and bath. In all, the house originally slept 10 skiers. 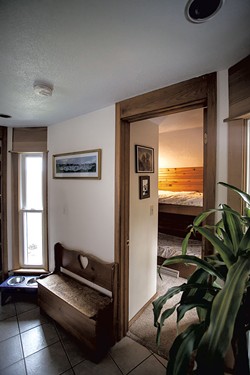 The rooms radiate from a circular staircase wrapped around the central core, which is beautifully lined with vertical cedar panels inside the house. The interior of the dome — the second floor — is one flight up. There, all notion of separate ceilings and walls disappears.

The dome’s space is dictated by the triangles, approximately four feet on each side, which make up the sphere. Six triangles along the east side are windows. Along the west side is the third-story loft. Its I-beam trusses extend into the empty space of the sphere, and the whole structure is supported by five salvaged telephone poles.

The dome’s carpeted floor is doughnut-shaped because of that cylindrical core. Its built-ins are angled along the outer perimeter. They include a galley-like kitchen; a curved kitchen table and benches, one of which is a salvaged church pew; and a long couch with one attached end table. Mike, the marketing and sales director of von Trapp Family Brewing in Stowe, took out the other end table to make room for a small beer fridge. 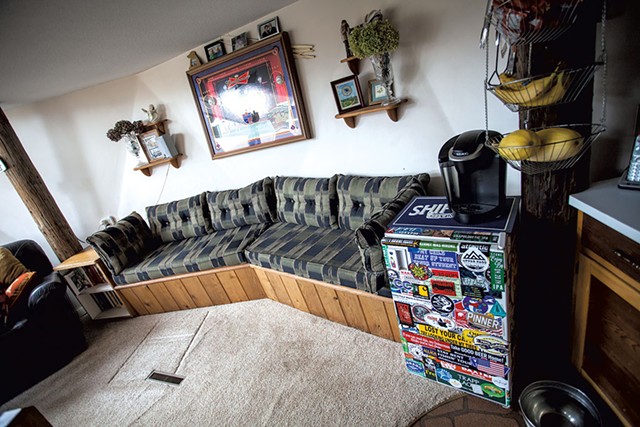 Living in this space takes some adjustments, say the Whittys. You can’t hang curtains from triangular windows angled somewhere between vertical and horizontal, so the couple wakes with the sun. They also have to periodically dust the “walls” — that is, the incrementally angled triangular panels. And, says Michaela, “You can’t just go to the store and get everything. You have to think about it first.”

Yet dome living has its advantages. Geodesic domes are more energy-efficient than rectilinear homes because they use less surface area to enclose greater volume. That cuts down on exposure to summer heat and winter cold. And heat-robbing winter winds flow around the spherical shape — already structurally strong due to its triangle-based design — instead of hitting a wall. Mike says the house heats up in no time, and in the summer he can create a “funnel effect” with air circulation by opening the first-floor windows and the master-bedroom skylight. They rarely need to use the air conditioner, and they burn relatively little furnace oil. 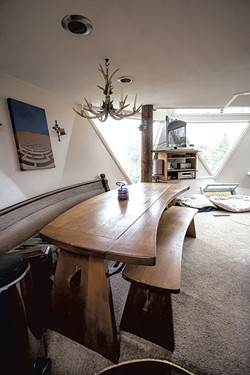 Buckminster Fuller recognized all these advantages, and challenges, when he received a patent for the geodesic dome in 1954. The structure was invented in Germany in 1922, but Fuller, an American architect and idealist, worked out its complicated mathematics in the 1940s.

In the 1960s, geodesic domes began springing up for all sorts of purposes, from mass entertainment to government operations. Two iconic examples from that era within driving distance of Vermont are still in use: pavilions built for the 1964 New York and 1967 Montréal world’s fairs. Now these domes serve, respectively, as the Queens Zoo aviary and an open-air truss structure enclosing the buildings of the Montréal Biosphère (not to be confused with the city’s Biodôme, which was built as a velodrome).

Fuller had envisioned the possibility of geodesic domes as houses from the beginning. He hoped they would become an affordable, mass-produced solution to the postwar housing shortage. But his patent meant that DIY builders had no access to designs. That changed when Lloyd Kahn published two how-to books, Domebook One (1970) and Domebook 2 (1971). (The latter is preserved online at issuu.com.) In the mid-1970s, kits entered the market.

Fortin, however, worked with an architect. “The kid — the architect, per se — … was very green, and I was the other greenhorn,” he recalled with a chuckle on a recent tour of the home. Fortin had become bored with building Colonial-style homes and wanted to try something new. 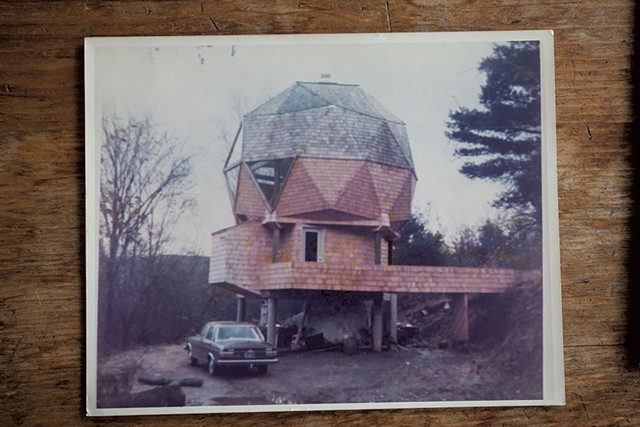 The nonagenarian vividly recalls realizing that the dome was one-fifth of a turn off its correct position. “I had to pick it up at five points” with a crane, Fortin remembers. Fortunately, the structure was so strong and light that it lifted and turned easily.

That resilience bodes well for the Whittys’ home, which retains much of its mid-’70s character. And, as the couple points out, while Vermont has at least a handful of geodesic domes, none is elevated like theirs. The Whittys’ bulbous dome, looking like it’s about to launch itself off the ledge, is a remarkable artifact of an era and a building experiment that were themselves boundary-pushing.

The original print version of this article was headlined "Dome, Sweet Home"