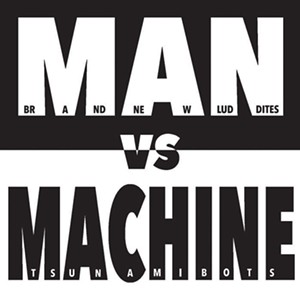 A war is brewing in Vermont's Mad River Valley. No, it's not a skirmish between skiers and snowboarders. It's a primordial conflict that stems back to the dawn of civilization — specifically to the first time early man got his foot run over by his wheel. (Early woman warned him that it would happen if he didn't look where he was going, but, of course, he didn't listen.)

Flash forward to 2016. Robotic surf-punks the Tsunamibots — composed of automatons Tomadore 64, the Main Frame and the Master Circuit — declared their intent of global domination on the exhilarating LP The Crushing. Their plan: Surf, surf some more and crush all humans. And, until now, things were going swimmingly.

But a human uprising has emerged: Brand New Luddites. Colonel Malware, Private Power Surge, Captain Virus and Corporal Blue Screen of Death — who look quite similar to the anthropoid hosts that their cybernetic adversaries manipulate to communicate with the masses — challenge the Tsunamibots to an ultimate battle royale of rip-roarin' bar chords and metallic fury. Over 12 tracks evenly split between the two factions, Man vs Machine documents the clash for Earth's dominion.

As the challengers, the Brand New Luddites have the first say — literally. Unlike the 'bots, who largely interface through instrumental communication, the Luddites are a fully lyrical camp.

"Complacent" begins with a syncopated surf beat and cascades of arpeggiated chords before exploding into a righteous four-on-the-floor beat. As a condemnation of screen culture, Colonel Malware sings, "Now I'm so productive / I'm in the palm of my hand / My new obsession / I'm on demand."

Moving into their second wave, on "Internet Race" the Luddites kick things up about a bajillion notches with furious riffs and pugnacious beats. They keep the vitriol flowing on subsequent track "Pressure 110117," a militaristic banger with descending minor chords and a roiling bass line.

The Luddites shred fiercely on "Acolytes." The uprising's last stand is a vehement declaration of independence from all things technological.

Picking up where their corporeal counterparts left off, the Tsunamibots respond with a stinging volley of blaring riffs and rubbery surf chords on "010010."

"Programmable Dudes" recalls '90s alt-rock with its slower pace and chunky chord progression. In a call-and-response, a robotic voice says, "Programmable," while a chorus of humanlike voices answers, "Dudes!"

A haunting, fingerpicked melody opens the final track, "Android Anxiety." A churning vortex of licks and thrashing hi-hats ultimately leads the track back to its stirring beginning.

So, who wins the war? Both humans and robot overlords are evenly matched throughout this high-concept surf-rock opera. Listeners will have to choose a side for themselves.

Man vs Machine will be available at tsunamibots.bandcamp.com on Friday, April 13. The Tsunamibots and the Brand New Luddites celebrate its release on Saturday, April 14, at Hostel Tevere in Warren.