The Tillerman Fires Up With Pizza and More in Bristol 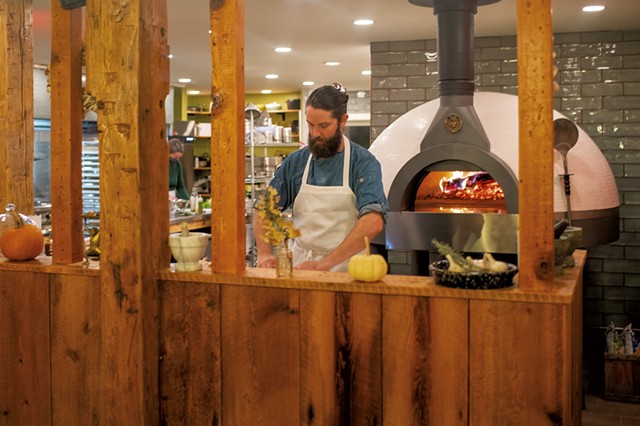 Most mornings, the wood-fired oven at the Tillerman hovers around 500 degrees Fahrenheit. The residual heat is a reminder of the fluffy, whole-grain pizzas that blistered on its deck during the previous night's service, when the oven was cranked up to 800.

"The oven is the first thing you see when you walk in," chef Justin Wright said, temperature gun and blowtorch in hand. "It's this showpiece. But we don't want this place to be a pizzeria."

While the pizza is an undeniable draw, Wright is using every bit of his "showpiece" to prepare a menu of smoke-infused, creative, locally sourced fare.

The Tillerman opened at the end of October in the longtime home of Mary's Restaurant and the Inn at Baldwin Creek on Route 116 in Bristol. Owners Kate Baron and Jason Kirmse have renovated, reinvented and refreshed the 18th-century white farmhouse. While there's still no sign out front, their presence — like the oven's — is evident as soon as you walk up the stone path and through the door.

Baron, Kirmse and Wright all moved to Vermont from California during the pandemic. Wright returned from the San Francisco Bay Area to settle in Lincoln, while Baron and Kirmse left the same region seeking "an escape route from climate disasters, overcrowding and sky-high real estate prices," the couple told Seven Days in August. They bought the property in June from Linda Harmon and Doug Mack, who retired after running Mary's for 38 years.

Sitting at a long, fireside table in the Tillerman's parlor on a snowy morning, Wright and Kirmse talked about adapting — or readapting — to Vermont's seasonal rhythms.

"And beets," Wright joked, because sourcing locally in Vermont means relying on root vegetables in the winter. "California is just an endless supply of things that are green and delicious all year round, and people eat and drink differently there."

"I love drinking white wines year-round," Kirmse said. He gave white and red wines equal billing on the restaurant's wine list, but customers aren't gravitating toward glasses of Chablis or grüner veltliner the way he expected. "They want red; they want warm," he said.

This isn't the first time each of these industry veterans has opened a restaurant, but starting a business in a small town requires a different mindset from a market such as San Francisco — or even Burlington, where Wright helmed C'est Ça in fall 2020.

"In cities, you have a built-in population of people that live above you, beside you, all around," Kirmse said. "You always know you're gonna get people on the day you open."

Outside the small town of Bristol, just past where Route 17 heads up and over the Appalachian Gap, the customer base is a little less obvious. But Wright's connections in the community have combined with the draw of the new to give the restaurant a busy first month.

"It's been like having a large family dinner party every night," Kirmse said. "Every single person that walks in here knows each other."

It certainly felt that way the night I visited. Most tables in the main dining room — past the bar and the open kitchen with its white-domed oven — were full at 7 p.m., and conversations jumped among them. I briefly felt like a party crasher or a plus-one who had tagged along to someone's cool, intimate gathering.

But by the end of the meal, my husband and I were joining in on the local chatter — largely thanks to our convivial server, Will Beuscher. 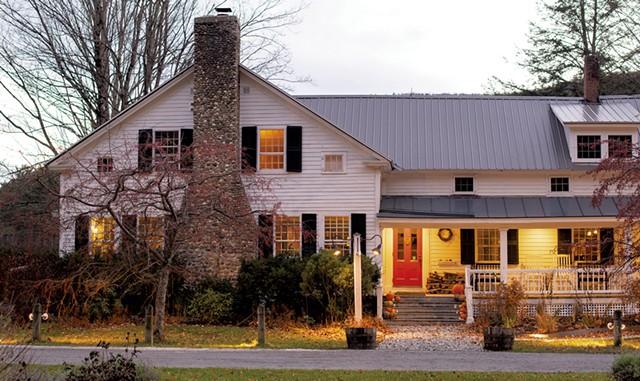 As we sat down, Beuscher approached with a bottle of tap water. "Can I interest you in a glass of Bristol 2021?" he quipped. "It's a great vintage."

He kept us laughing throughout the meal while anticipating our every need and those of the other tables — with help from Kirmse, who had greeted us and poured our drinks from behind the bar.

The Tillerman staff is still in its opening phase: Kirmse, Baron, Wright and Beuscher run the show with one dishwasher. To keep the service manageable for a small team, they've capped the number of reservations available each night and currently don't accept walk-ins. As they staff up and fill key positions in the front of the house and the kitchen, service will expand to another dining room, Kirmse and Baron said.

Expansion will also be seen on the menu, which currently has four sections: "snacks," "greens & things," "wood-fired fare" — pizza, for the time being — and "sweets."

As much as Wright downplayed it, the pizza is a draw. The dough is made with stone-ground, organic, Vermont-grown and -milled wheat flour from Elmore Mountain Bread. Wright uses a 24-hour fermentation with a natural levain. The crust is chewy, fluffy, crispy and vaguely Neapolitan — as if Naples were at the base of a mountain in Vermont.

My husband and I ordered two pies, which was a bold move for two people who also ordered a bunch of dishes from the other sections of the menu. But we had to try the baseline: a Margherita ($16) with Italian tomatoes and fresh Vermont mozzarella.

And we couldn't resist the Fiorella ($19) with smoked pepperoni, Calabrian chiles, cheddar and honey. The latter pizza's slow-building heat, combined with the proximity of the woodstove, warmed me to the point of taking off a layer.

We preceded our pizzas with an order of the wild mushroom and Dutch Knuckle snack ($10), mostly because we were charmed by the name "Dutch Knuckle." The mushrooms and shaved cheese came on a bed of arugula with two long strips of focaccia, which we promptly devoured. The Dutch Knuckle turned out to be an alpine-style cheese from Sugar House Creamery in the Adirondacks — buttery, nutty and not nearly as silly as its name might suggest.

We also went for the chicory salad ($12), which paired crisp radicchio with crunchy apples, sweet dates, Jasper Hill Farm's Alpha Tolman cheese and a salted-plum vinaigrette. One could make an entire meal of vegetables at the Tillerman: The frisée and anchovy salad ($12) and the simple oven-roasted carrots ($11) caught our eye on other tables.

But sticking to vegetables would mean skipping the local meatballs ($16), which I refuse to do as long as they're on the menu. The two hefty, fist-size meatballs arrived in a pool of tomato sauce, with another two strips of focaccia jauntily poking from the bowl. They'd been cooked in the wood-fired oven, and the smoke had left its haunting touch on them.

During my snowy morning visit, Wright told me he roasts the meatballs for about 10 minutes on a rack in the oven when it's around 500 degrees. With all the wood, time and labor it takes to build the fire each morning, he likes being able to cook with it all day long.

"It's a lot more interactive than just 'on,'" he said, miming the turn of a dial that would light up a gas or electric stove. Indeed, he hopped up frequently as we talked to add a log.

"Searing each individual meatball in olive oil in a pan takes a lot of olive oil and a lot of time," Wright said. "It's messy, and you burn yourself a lot. This way, we're using the oven, and they get caramelized on the outside."

The organic beef and pork come from Longest Acres Farm in Chelsea — a name that, like those of the other farms and producers from which the restaurant sources, doesn't appear on the menu.

"We don't want to do that," Kirmse said. "What we want to do is for people to just know that's what we do." 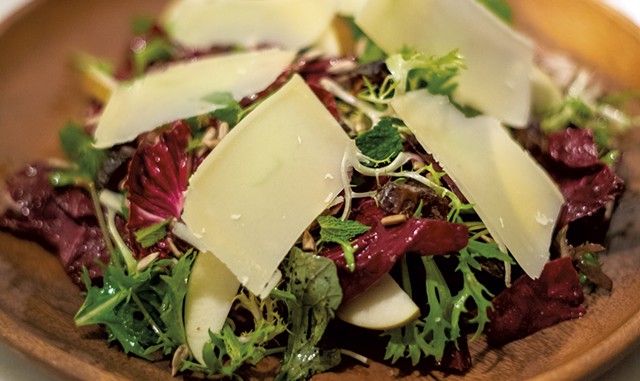 "We all know what a box of mesclun from an industrial organic farm looks like," Baron added. "When you see the chicories from [Starksboro's] Footprint Farm in the salad — the freshness and the crispness — that doesn't need to be written down."

The producers are no secret, though, and the team is eager to discuss the sourcing of the menu, which will continue to change weekly with the local growing seasons. During our meal, we chatted with Beuscher about the marjoram and sage he'd grown for one of the pizzas. Another table asked about the Dutch Knuckle, and a third about the source of the rustic carrots.

"Talking with guests about this stuff creates a rapport and a trust," Kirmse said.

"We know people are going to come in, especially folks in this community who had a relationship with Mary's for so many years, and we want them to trust us and be daring with us," Wright said.

The reimagined space lends itself to all kinds of occasions, with the warmth of fireside seating, the cross-table chatter, and the direct view of pizza (or carrots) going in and out of the oven. I'm anticipating return visits for snacks and a beer at the bar; pizza and a Negroni back at that woodstove-adjacent table; and oysters with a glass of wine at a couch in the parlor. Or perhaps I'll try another all-out stuff-fest with something from each part of the menu.

"The experience can be casual, or it can be special," Baron said.

The original print version of this article was headlined "Open Fire"