The Things, They Are a-Breakin': Part 2 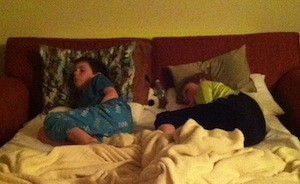 I'm sad to report that the deployment curse has decided to stick around. Only this time, instead of breaking material things, it has unleashed its power on our bodies!

If there is a physical ailment to be had, we've had it. Coughing, runny noses, ear aches, stomach woes, growing pains ... Our bodies have taken a beating.

I suppose it's the time of year for such things, so I'm trying not to take it personally. Unfortunately, the brunt of this physical attack hit during what will forever be referred to as "The Worst Vacation Ever." On our nine-hour drive to an indoor water park, two of my boys came down with terrible coughs and fevers. This was fun to endure while my GPS — which hates me, apparently — led me on a string of back roads to nowhere.

Once we finally arrived, we spent the first day in our hotel room watching cartoons. The second day, when the fevers had faded, was a blur of cough syrup, pain reliever and all the water-park fun their poor little bodies could muster. Until the coughing turned into severe sore throats. And then the stomach woes hit. And then, well, need I go on? The next couple of days were spent trying every home remedy we could find on Google.

The drive home was miserable, too. In the middle of a snowstorm, my windshield wiper broke. I can't make this stuff up.

At home, we were eager to move on and put the sickness behind us. But then my microwave broke. Now, that's just going too far. "The problem with your microwave was a fluke and rarely happens," the repairman told me. This was not shocking news. "Fluke" is my middle name.

When Matt comes home, I'll hug him so very tightly with my newly developed Superwoman arms. Until then, I think I'll go buy an extended warranty for everything we own and make sure our insurance is up to date.

Tasha Lehman is a mother of three boys living in Vermont. Her husband, Matt, is a first lieutenant in the Vermont Air National Guard who recently headed overseas for his first deployment. The “Home Front: Diaries of a Vermont military family” series chronicles their journey. Read more about their story in February’s “Use Your Words” essay.