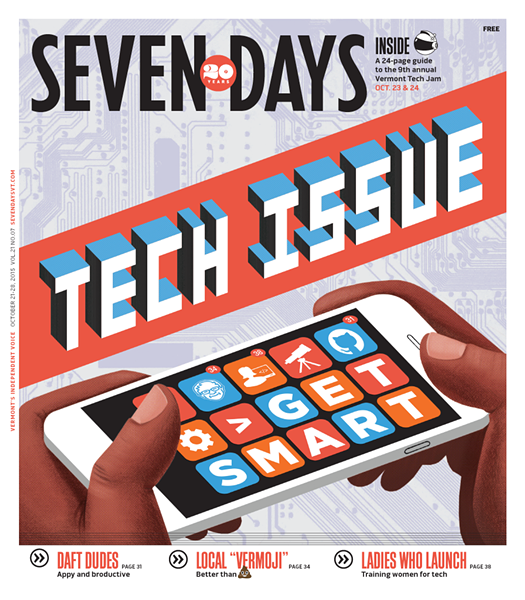 This week's Tech Issue* is timed to coincide with a job fair and tech expo organized by Seven Days and the Vermont Technology Alliance. With 60-plus exhibitors — from large-scale employers like the University of Vermont Medical Center to smaller startups such as Designbook and Step Ahead Innovations — the Vermont Tech Jam is annual evidence that innovation is alive and well in the Green Mountain State.

Seven Days has been following this evolving story for years. In our first tech issue — a few days before the very first Tech Jam in January 2008 — Paula Routly profiled Dealer.com back when the South End startup had only 110 employees. Now it employs more than 850, and two years ago, changed ownership for a cool billion dollars.

We also wrote about MyWebGrocer, which had 40 employees then, compared with 264 working in the U.S. today, most of them at HQ in Winooski; more workers are based in Ireland, Canada and Chile.

Both companies are presenting sponsors of the Tech Jam, and each is looking to fill at least 20 jobs. And they're not the only ones with positions available. Novetta, a big-data firm based out of state, is expanding its Burlington office, hoping to add 20 more programmers before the end of the year.

Numerous institutions, organizations and events are fueling this expanding tech scene. Over the years, we've covered many of them, from the game design program at Champlain College to the cybersecurity research at Norwich University; from the 24-hour HackVT to the free-wheeling Champlain Mini Maker Faire.

We've showcased startups, too. Seven Days uncovered Greensea, the Richmond-based robotics firm that makes control systems for submersibles, and was also the first to note the growth of the white-hat hackers at Pwnie Express, who build penetration-testing systems.

This year's tech issue trains the spotlight on Daft Labs, a fast-growing Burlington startup that's building applications for companies inside and outside the state. Alicia Freese visited its College Street office, complete with kegerator, in "Up to Code".

Girl Develop It Burlington, Step Up to Information Technology and the local chapter of Lesbians Who Tech also get ink this year. They're three Vermont groups working to boost the number of women in tech jobs ("The Silicon Ceiling,". And we introduce the tech-star host of "InnoVaTe," a new show from Vermont PBS that will put stories like these on small screens, from TVs to tablets to smartphones.

Of course, it's impossible to know whether the tech tools we depend on today will stand the test of time. If this issue had appeared 100 years ago, on October 21, 1915, the cover might have depicted Vermont's original tech hub: Springfield. Back then, Precision Valley, as the area was known, was churning out startups left and right. Kirk Kardashian remembers those days in "Once a Tech Town". "Springfield was a white-collar community, populated by engineers and executives, with the highest per-capita income in Vermont," Kardashian writes. That's not the case today.