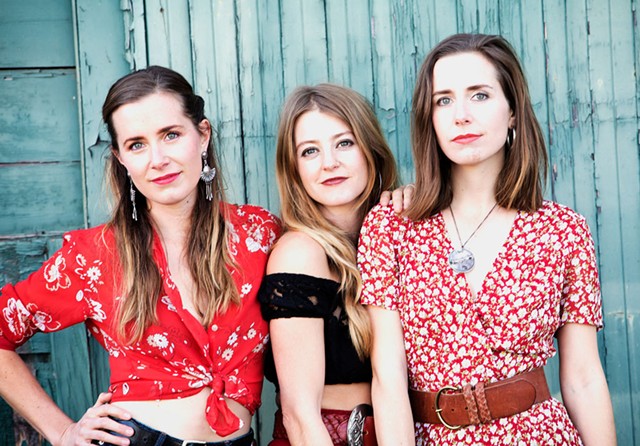 There's nothing quite like the sound of siblings singing. The Roches, the Carpenters, Haim, First Aid Kit, Joseph — all are known for their exquisite songwriting, of course. But their magic ingredient — shared DNA — is something that can't be manufactured.

A newer sororal act to emerge from the San Francisco Bay Area's diverse music scene is the T Sisters. Erika and twins Rachel and Chloe Tietjen grew up in Berkeley, Calif., and are currently based in nearby Oakland. Known for bucolic harmonies and acoustic instrumentation, the sisters find good company in the contemporary folk and Americana scenes. And given that Vermont is big with the twang, they made a trio of appearances here in 2017: Warren's Frendly Gathering, Brattleboro's Stone Church and South Burlington's Higher Ground in support of the Wood Brothers.

The T Sisters perform on Tuesday, August 21, at the Higher Ground Showcase Lounge in South Burlington.

Seven Days caught up with Erika by phone.

SEVEN DAYS: I've seen the word "sassy" used in conjunction with your band quite a bit — including your own website. What does "sassy" mean to you, and who is your sassy inspiration?

ERIKA TIETJEN: I think in folk music — especially when you're singing pretty harmonies — it's easy to cross into the sweet and the wholesome, and even the treacly. And those things aren't necessarily bad. It's great to use all the colors at your disposal. Sometimes it's important to be sweet, earnest and sincere — but not all the time.

To me, sassy is fun, spunky, a little feisty. We're not, like, cursing like sailors or yelling at the audience. It's just some balance of sweet and spicy.

Our dad's sister — she's the original sassy. That's actually her nickname. She was around us a lot growing up. Also, our mom. She's not a demure, yes-woman housewife. She's a dancer, and she's spunky.

SD: I heard through the grapevine that you might be pushing the T Sisters' sound beyond the twang. Care to set the record straight?

ET: When we started out, we were kind of just learning our instruments and transitioning from weird musical theater to more folky music. We got hooked up with [producer] Laurie Lewis, who's a really great folk and bluegrass musician. Initially, we were a little more in the folk world, playing folk and bluegrass festivals — which we still do. But I think as we've gotten more comfortable as instrumentalists, writers and performers, we've expanded into more electric stuff. Rachel and I both play electric guitar now.

You have to change over time. If you don't, it's pretty boring. A lot of the bands that I love are more in the indie-folk genre: Lucius, Shovels & Rope, Margaret Glaspy. My interests have kind of shifted more to that realm. When you get intrigued by new music, you want to experiment with that.

SD: I can imagine — especially in folk music because it's such a traditional genre.

ET: Absolutely. We just kind of happened into the [folk scene] when we started. Who knows? Maybe in a few years we'll be like, "All right, well, we have a couple metal songs now."

SD: I love the '60s-girl-group-meets-playground atmosphere. Can you tell me how that song came together?

ET: [It was] inspired by "If I Had a Hammer," the classic Pete Seeger folk tune about political activism. And Chloe's response — "I have a hammer" — is kind of about this contemporary experience where we have countless tools at our disposal to communicate [and] to engage in activism if we wanted to. And we have so many tools, it ends up creating this condition of ambivalence. There's so much information [and] ways to express oneself that sometimes you can feel maybe a little paralyzed — feeling really strongly in competing directions. I don't know if that's always super clear.

We did this workshop where we worked with 300 high school girls, and that was one of the songs we taught them. And I think the meaning wasn't that clear to them, because it's pretty figurative. Regardless of whether or not someone picks up on the meaning, I think it's just fun. We use a lot of unison singing, which we don't always do, and that makes the harmonies really pop.

SD: When it comes to multi-sibling bands, I think people sometimes assume, "Oh, they do everything together. They're like one person!" What are some individual pursuits you each have?

ET: I have a master's in Russian gender studies, and I lived in Saint Petersburg for a year. So, the whole Russian thing is very much just me. I'm trying to keep my grasp of the language alive.

[For] Rachel, visual art is definitely her zone. And Chloe does a lot of everything. [She's] a really good crafter — sewing, building. She's kind of ended up as our accountant, too. And she's also a great cook and fermenter.

SD: Other than physical distance, what's the hardest thing about connecting with East Coast fans? Do you find that there's an East/West cultural divide?

ET: I think there are these divides [in] some places. We definitely didn't feel it in Burlington on [our tour with] the Wood Brothers. That was the most excited crowd of the entire tour. There's some Vermont-California kinship.

SD: You're not the first person to say that. It's a thing.

ET: Yeah. [Burlington] doesn't have the Northeast post-puritanical vibe going on at all. But there are some places we've played in the Northeast where people seem a little more buttoned-up and less effusive during a show. And people are super nice. It's not about being kind. It's just about the energy that they put out in a show.

SD: What's next for the T Sisters?

ET: We're working on the next [album]. We recorded three tunes in Nashville with Oliver Wood from the Wood Brothers, which was really awesome. We have more songs that we want to record. [But] the album process is a big to-do. We have some of the Wood Brothers sitting in on each of the tunes. They're some of our biggest musical heroes.

SD: What's something unique about Oliver as a producer?

ET: He just has a really awesome attitude and style. He's really into capturing the vibe and organic, raw sounds, and not making things overly polished or glossy. We were at a point where we wanted to hear what that would sound like, because our second album [had] a cleaner production sound. So we just wanted to try something different, and Oliver's perfect for that. He wasn't overly nitpicky — which is good because it's really easy to get drawn into the minutiae in the studio. You start to beat your head against the wall about a couple notes and he's like, "No, no, no. Back up. This sounds awesome. This is cool."

The original print version of this article was headlined "Sister Act"