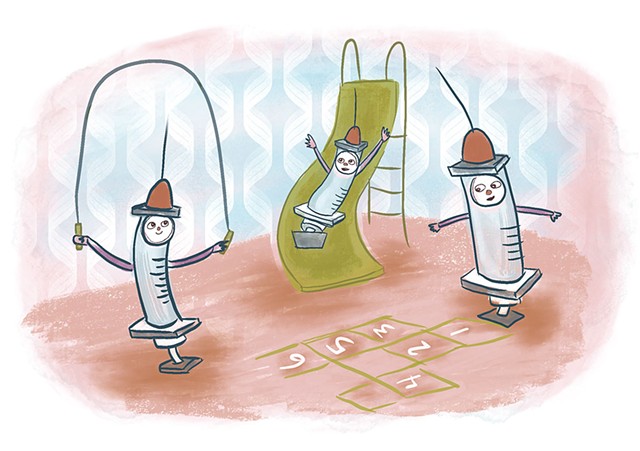 Shelburne resident Rachel Smith feels like she's living under a blanket of stress these days. Everyone in her household is vaccinated except for her 6-year-old daughter, and the family has assumed "an extra level of caution" in order to protect their youngest member, Smith said.

She allows her 17-year-old son to hang out with just a small group of friends. Her daughter's playdates are mostly limited to the outdoors. Her children have curtailed their participation in theater and music classes. And there's apprehension around seeing a close family member who refuses to be vaccinated or wear a mask.

On Tuesday, Centers for Disease Control and Prevention director Rochelle Walensky quickly endorsed an advisory committee’s recommendation for the vaccine, clearing the way for 28 million kids in the country — including about 44,000 in Vermont — to get their first COVID-19 shots starting this week. Vermont parents can start registering children for vaccine appointments at 8 a.m. on Wednesday, November 3.

Smith knows that there’s a small chance of side effects and has some trepidation that the vaccine is relatively new. But in her mind, the benefits of preventing serious illness far outweigh those risks.

"I'm really excited that it's going to be available, and eager to make that appointment as soon as I can," Smith said.

Health officials say getting kids vaccinated will have a big impact on the state's efforts to tamp down COVID-19.

Children ages 11 and under currently have the highest rates of infection in Vermont, and a large number of them are still vulnerable to the virus, Health Commissioner Mark Levine said in an interview last Friday. Those kids have the potential to transmit COVID-19 to family, classmates and others.

Vaccinating them will help end the state's Delta surge and prevent future variant strains like it from emerging, Levine said — especially when combined with booster shots for adults.

Some families, such as Smith's, will eagerly line up to get the jab for their kids. Others are reluctant.

Brianna Limoge of Stowe, who has four young children whom she homeschools, said she is not planning on having them vaccinated. She sees the decision as a personal one that she's come to after weighing the risks and benefits to her family. She's troubled by the possible side effect of heart inflammation, or myocarditis, which has been seen on rare occasions in teens and young adults who received the Pfizer or Moderna vaccine. And she believes that parents should have the right to choose whether they vaccinate their children, "without coercion or societal pressure."

National studies suggest anywhere from 27 to 66 percent of parents of 5- to 11-year-olds plan to get their kids vaccinated as soon as they can. The health commissioner said he has high hopes for strong uptake among Vermont kids.

"Our experience with the 12- to 18-year-olds turned out to be so good," Levine said, noting that 75 to 78 percent of Vermonters in that age range are vaccinated. "So, if that's any indicator for parental acceptance of vaccine for their children, I think that bodes very well."

The state has ordered 15,900 10-microgram doses — one-third the dosage of the Pfizer vaccine for ages 12 and up — for school- and community-based clinics. Pharmacies and other health care partners will get an additional 7,500 kids' doses. This means that the state would be able to vaccinate "well over a third" of all 5- to 11-year-olds in Vermont very quickly.

Clinics are set to begin by the end of the week. Pediatricians will be able to order the tiny doses to administer in their offices starting the second week of November. Each dose is just one-sixth the weight of a grain of salt before it's combined with stabilizers and preservatives, according to the American Academy of Pediatrics.

Doctors expect that fewer kids will get vaccinated in regions of the state where vaccination rates are already lagging.

"I feel very fortunate to be here in Chittenden County, where we've had an excellent uptake of the vaccine amongst parents ... So I'm hearing a lot of really excited parents who are planning to vaccinate their children, no questions asked," said Dr. Leah Costello, a pediatrician at Timber Lane Pediatrics in South Burlington. Those parents trust the science and have been encouraged by the good response to vaccines from kids ages 12 and up, Costello said.

Other parents say they will wait for more data but are planning to get their young children vaccinated eventually, Costello said.

And just a small number of parents Costello has talked to are adamantly against the vaccine. "But I know that's not the scenario across the state," she added.

One of the areas that's been hardest hit by COVID-19 in recent weeks is Orleans County, which has the third-lowest vaccination rate in the state for ages 12 and up, at 77 percent. At North Country Union High School in Newport, the largest high school in that county, just 56 percent of students are fully vaccinated, according to superintendent John Castle.

Dr. Alexandra Bannach, a pediatrician at North Country Hospital in Newport, said the discrepancy in vaccination rates between different parts of the state is "quite stunning."

Bannach said she has daily conversations with parents about vaccinations when they come in with their kids.

Some parents tell her they aren't ready yet to vaccinate their kids. Others say they don't trust the shot or they're not worried about their children getting COVID-19, since the symptoms would likely be mild.

"I often do feel that just opening up the topic [and acknowledging their concerns] helps parents and may reduce their vaccine hesitancy," Bannach said. "They might not necessarily that minute come to the decision that they're going to do it ... They might come back and ask again next time, but that's OK to have those ongoing conversations. The goal is really to continue to educate."

"There's not one message that will convince everyone to get vaccinated," said Brendan Nyhan, a political science professor at Dartmouth College who has studied vaccine hesitancy. To that point, Costello said she tailors her approach to the individual.

When parents raise concerns about the vaccine causing fertility issues or other side effects, Costello shares data explaining why medical research doesn't support those worries. For example, the rate of myocarditis stemming from a COVID-19 infection is actually higher than the risk of myocarditis after vaccination, Costello said.

Sometimes, she brings up the fact that she is a mom of young kids.

"I would never recommend something for my patients that I don't do for my own three children," Costello said. "And a lot of times, I find that is comforting to parents to hear that from me."

When the vaccine was approved for teens, Vermont's chapter of the American Academy of Pediatrics and the Department of Health partnered to hold virtual town halls during which pediatricians could answer parents' questions. Similar events are being planned this month for parents of younger children.

Another way to reach more children, Costello said, is to make sure doses of the vaccine are readily available. That means stocking it in primary care offices so that doses are on hand if a family making an office visit decides it's time to have a child vaccinated.

"We are going to continue to be relentless — relentless in messaging, relentless in education but relentless in ability of a population to access the vaccine," he said. There will be 96 school-based clinics across the state over a six-week period, Human Services Secretary Mike Smith said on Tuesday at Gov. Phil Scott's press conference.

Many parents are banking on easy access. Jenn Adams, a Williston mom of two, said her kids have missed almost three weeks of school this year because of COVID-19 cases there.

"My children will be vaccinated immediately, as I feel it's the only way I can protect them effectively and still be able to work and give them the in-person interaction their mental health requires," Adams said.

Meredith Breiland, a Milton resident, said her kids, ages 7 and almost 5, don't like shots, but she's been talking with them about the vaccine for so long that they're on board.

"These past few months have felt like some of the worst," Breiland wrote in an email. "People without kids don't realize how cautious some of us have continued to live for the sake of kids and school ... Ready to exhale."

Sara Tully is the health officer for the town of Mendon in Rutland County and the mom of a kindergartner. She's been dismayed by the COVID-19 safety protocols in schools and the minimal guidance from the state.

"I put my faith in modern science and will follow her doctor's advice," Tully wrote in an email. "Am I nervous? Of course, I am. But I am nervous every single day I send my 5-year-old off to school."

To register for an appointment, visit healthvermont.gov/KidsVaccine

The original print version of this article was headlined "Small Shots"