The St. Johnsbury Athenaeum Director Looks Past Controversy and Strives for a More Profitable Future 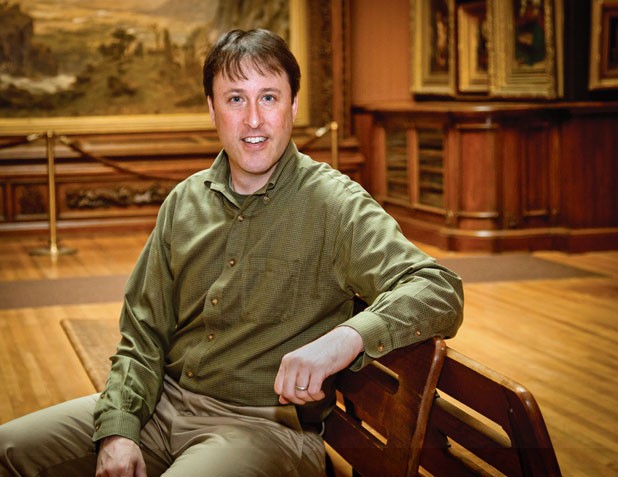 face-to-face.”One of the thoughts running through Matthew Powers’ mind last January, as he observed more than 200 people joining arms in a “hug” outside the St. Johnsbury Athenaeum, was Who knew this little building on the hill could command so much attention? And, he asked rhetorically during a recent interview, “How many directors have had the experience of a crowd of people showing up, on short notice, to encircle the whole place?”

Not that this particular gathering was a positive thing. The Hug was a protest action in response to the layoffs, announced in December, of the Athenaeum’s library staff.

Since 2010, Powers, 40, has been executive director of the 142-year-old institution, founded in 1871 by Horace Fairbanks, son of a successful scale manufacturer. Presiding over the legacy that the Fairbanks family created for the community but did not endow, Powers and the trustees cited mounting, unsustainable financial duress as the impetus for the layoffs. But many St. Johnsbury residents felt that abruptly dismissing their beloved — and, in some instances, long-serving — librarians was an unacceptable remedy.

Soft-spoken and quiet, Powers is not the kind of person you would expect to find at the center of a maelstrom. And, in fact, he has largely managed to stay out of the media coverage — board chair Bill Marshall has been the Athenaeum’s spokesperson. “You’re only the third person so far who has asked me for an interview,” Powers told Seven Days.

The way to Powers’ office goes through an inconspicuous door at the back of the library’s fiction room, near the entrance to the gallery that houses a famed collection of Hudson River School paintings. Up a flight of stairs, in an uncluttered, wood-paneled office, Powers sat at a desk near a photograph of a sequoia. The tree, which can live 3000 years, is an apt symbol for withstanding the winds of change.

Powers grew up in Essex Junction and earned his master’s in American and New England Studies at the University of Southern Maine. Before taking a job at the Athenaeum, he was the assistant director of education at the Remick Country Doctor Museum and Farm in Tamworth, N.H., followed by a 13-year stint as director of the Sandwich (N.H.) Historical Society. Both positions, he indicated, placed him in a milieu of scholarship beyond the classroom, history beyond the display case, and museums engaged in the community.

When the Athenaeum board hired Powers, it had just initiated a capital campaign to install skylights in the gallery. The new director would have to oversee this fundraising and renovation, and bring the Athenaeum up to speed in the digital age. In addition, Marshall told the North Star Monthly in 2011, Powers would be required to “balance the budget, improve outreach for the art gallery, and collaborate with other local institutions to market St. Johnsbury as a cultural destination.”

When the library staff was laid off in December, Marshall made it clear that one new goal for the Athenaeum was to market the gallery. The board chair has referred to the art repository as a “sleeping giant that has to wake up.”

Mark Mitchell, a conservator at the Philadelphia Museum of Art and author of the Athenaeum’s Handbook of the Art Collection, calls the gallery “the best of best, an irreplaceable asset.”

No one would deny that the Athenaeum owns stunning treasures that deserve to be more widely seen. Yet, with operational expenditures exceeding income for at least the past three years, Powers has had to address the budget first. That has involved difficult and controversial decisions. Asked about letting go experienced librarians, Powers paused for a long moment before offering soberly that he saw no other way.

Even with his limpid blue eyes and open face, Powers sometimes has the blanched look of a person under prolonged strain. “It’s been hard,” he said. Indeed, public disgruntlement has taken the shape not just of letters to the editor of the Caledonian-Record but of personal confrontations with him and members of his family.

While the controversy concerns the layoffs on an immediate level, at its core it appears to be about whether the Athenaeum belongs to the people of St. Johnsbury or should remain under the sole aegis of its board of directors. On this matter, Powers was clear: “It’s a private, nonprofit institution,” he said. “The board of trustees are the owners; they are responsible.”

Plenty of critics question that view, including members of a group calling itself the Neighbors in Support of Athenaeum Library Staff. At a meeting on February 2 — to which the Neighbors invited the board, and the board declined — a former Athenaeum trustee asked why the board meetings were no longer open to the public, as they once were. A town resident wondered how the board intended to replace five vacancies, and whether the public would be allowed input. Before town meeting earlier this month, the Neighbors published in the Caledonian-Record a notice of no confidence in the Athenaeum’s board of trustees.

While the Athenaeum does offer free membership to St. Johnsbury residents ($15 for others), this does not confer the voting privileges typical of other membership libraries, a species of 19th-century institution that is increasingly rare. Nor does the slim income from memberships come close to covering the institution’s annual budget of $560,000. The Athenaeum requests $115,000 annually from the town of St. Johnsbury. At town meeting, that appropriation was easily granted once more, but it is just 18 percent of the Athenaeum’s total operational budget — one of the lowest per-capita appropriations for a library in the state.

Charging the 8000-plus annual gallery visitors a fee (as opposed to the previously suggested $8 donation) might assure a revenue stream to channel into a mix that also includes interest from the Athenaeum’s endowment, overdue fines, federal grants and income from benefit events such as an annual gala. (Yet as of January 1, access to the gallery is now entirely free, according to the Athenaeum’s website.)

Powers said he was ready to embark on some “exciting” prospects, fulfilling the institution’s recently streamlined mission to “promote lifelong learning through art, literature and information services, and preserve the National Historic Landmark building, collections and furnishings.”

And how does he propose to balance the budget? Through the kinds of partnerships and collaborations that he’s successfully implemented in the past, he said.

“We have to create our own Athenaeum activities, harnessing our unique voice and expertise in humanities and American studies,” Powers asserted.

By this he means not just hosting existing statewide lecture programs but launching signature programs. He means the Arts and Culture Series, which taps the indigenous talents and expertise of St. Johnsbury-area artists, art historians, scholars, authors and others for monthly presentations. And he means the Capstone collaboration with St. Johnsbury Academy, in which students capitalize on the Athenaeum’s unique history and collection materials to research and create presentations.

Then there are programs underwritten by local businesses, individuals and foundations, such as the Acorn Club, which promotes literacy in 2-to-4-year-olds by bringing the children’s-library materials to area preschools and daycare.

“If we are doing our job,” Powers said, “and offering innovative programs and utilizing dynamic partnerships, then this shared value will hopefully translate into increased revenue and support.

“We could just show up every day and open the doors and that’s all, but there’s so much more we can offer … we’re an Athenaeum,” he continued, harking back to the name derived from the temple devoted to Athena, goddess of wisdom, civilization, mathematics, the arts, crafts, law and justice.

Meanwhile, the Neighbors are still hoping for productive conversations with the board.

Considering that the Oxford Dictionaries define an Athenaeum as “an association of persons interested in scientific and literary pursuits, meeting for the purpose of mutual improvement,” perhaps they could meet inside that little building on the

Speaking of State Of The Arts, culture