The St. John's Club: A Lakefront Club for the Average Joe 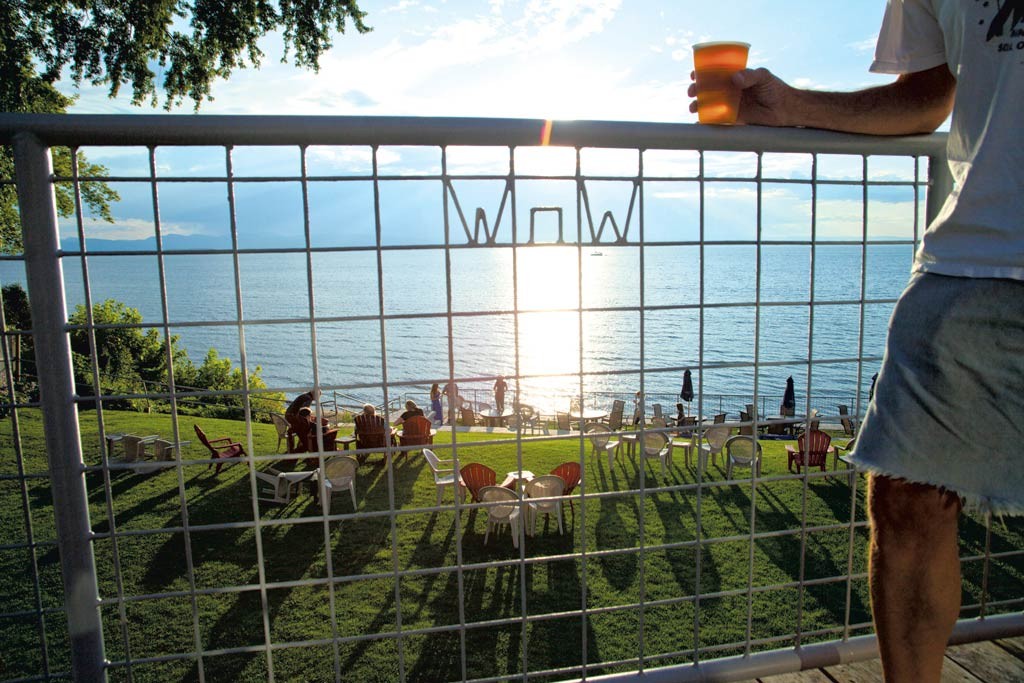 On the morning of my off-hours visit to Burlington's venerable St. John's Club, an Adirondack thunderstorm rolls and booms across the lake, threatening to disrupt the club's vaunted view of Lake Champlain. But the massing thunderheads and occasional stabs of lightning only add to the beauty of the scene. Few forces on Earth could spoil this view.

Later that day, the region's finicky weather systems finally give way to a salmon-hued sunset that tints the undersides of the clouds. Despite a slight chill in the air, about 30 of the St. John's faithful gather on the club's several patios, most of them simply gazing westward as the sun settles into a mountain notch.

On August 17, St. John's Club will celebrate its 50th anniversary at its location on Central Avenue; prior to that, the establishment wasn't anchored to any particular site, says bar and food manager Ken Ploof. Founded about a century ago, he reckons, St. John's Club used to bounce around its lakefront neighborhood, at least once finding temporary digs above a long-since-shuttered store. "It was just this little club upstairs" in those days, says Ploof, who's also celebrating a milestone anniversary with the club. This is his 20th year behind the bar.

The venue's unassuming brick exterior and wobbly wooden fence conceal from passersby that its backyard boasts spectacular lakefront views. The pleasure of experiencing them is reserved for members, who pay $50 annually for access to what has become the club's single most valuable asset. The club purchased the land on which the building was constructed in 1964 for the regal sum of $1. About five years ago, the last time anyone checked on the current value of the property, the figure cited was an even million.

Much of that value is borne by St. John's unobstructed lakefront access. From the building's lower-level deck, the grassy land slopes downward. A lawn accommodates a line of deck chairs that beckons to lovers of the sunset. Beyond that stands a landscaped and stonework patio with room for about eight round tables with chairs, a feature added to the grounds after Tropical Storm Irene and subsequent rough weather eroded the property's waterfront border.

Below the patio, a shallow beach extends a couple of hundred feet along the shore — and, in a sense, beyond the shore. The first several hundred feet of water are only one or two feet deep. "It's a wonderful thing for children," says Ploof, 54. "They can play out there, and it's not a big drop-off."

St. John's, though distinguished by its membership policy as a "social club" rather than a bar, has distanced itself from the men-only laborers' drinking halls from which it descends. (Its founders were Francophone mill workers of the Union St.-Jean-Baptiste.) It now welcomes families — which explains the kids who gambol on the coastline — and Ploof makes a point of highlighting the club's policy of nondiscrimination.

Time for a petite disclosure: Though I'm not a member, I'm an occasional off-key contributor to St. John's Club's Friday karaoke nights, the only weekly event where nonmembers are welcome. Invited there by friends who are members, my wife and I were struck immediately by the scene's inclusiveness. Same-sex couples, dancing cheek to cheek, shared the floor with retirees, twentysomethings, and clients and employees of the HowardCenter. No single word describes the scene more aptly than "unpretentious."

Indeed, if the club's spectacular view encourages people to become members, the welcoming atmosphere encourages them to renew their annual dues.

Larry Forcier, 70, is a University of Vermont professor emeritus of natural resources. He and his wife, Anne, have been members for "five or six" years; Forcier's son, also named Larry, joined a couple of years after his father, and a few years ago held his wedding reception at St. John's. "The people in the club are really diverse ... in terms of interests, economic backgrounds, that kind of thing," says Forcier Sr., who notes that all three Forciers come to the club weekly. "It's just welcoming to all. It's just wonderful," he adds.

Ploof, one of the club's 10 employees, considers himself a member, too. "I love the people and I love the place," he says. "These are my friends — the ones I look forward to seeing."

The membership now numbers about 1,400, including many out-of-staters. That's pretty impressive for a building with just two midsize indoor social spaces. The upstairs room has a capacity of 125; the downstairs holds 80. In addition to collecting annual membership fees, St. John's stays financially healthy by selling food and drink and renting out its spaces for private functions. But even when one of its rooms is booked, the club's policy is to reserve the other one for members.

Both rooms afford views of the lake, though the vista from the upper deck is the more appealing. The downstairs, which was renovated about eight years ago after a fire, is due for further improvements, Ploof says. The club's leadership hopes to add a few more large windows, thus highlighting the lake view so beloved by patrons. "The first thing [people] say when they come here is, 'Oh, my God, that view!'" says Ploof. "That's number one. Without that, who knows what it'd be?"

Susan Huling, an accountant from Charlotte, sits with her partner and two friends on the recently constructed lower patio. Her love for the club, and for what it represents, is passionate. "This is the best way for the regular guy to have the four-star experience of the lake view," Huling says.

There's no disagreement on the view. But St. John's' chunk of the actual lake gets surprisingly little use, Ploof says, barring the occasional frolicking kid. Now and then, boat-owning members will drop anchor just beyond the shallows and wade in for a burger and a beer, but, as the underwater shelf has extended its reach in recent years, those occurrences are rarer. Jet Skis, which can traverse the shallows, occasionally pull up onto the club's beach during the summer months. Mainly, though, the club's piece of lake is "for our members to just come down and sit there and enjoy the view," says Ploof.

Members seem to agree with that assessment. Though they speak favorably of the diverse crowd, the "comfort food" served by the kitchen (including burgers, chicken fingers, nachos and other humble fare) and the affordable, strong drinks, everyone I talk to on this summer evening mentions the view. For most members, that alone justifies the cost of their annual dues.

Forcier Sr. and Anne used to live in a Burlington waterfront neighborhood; after moving closer to the city center several years ago, they found themselves pining for the lake. "The club gives us a really nice place to be at the lake when we wish to be," says Forcier Sr. "The scenery is spectacular, and I think you can't help but feel more relaxed."

Susan Cobin of Burlington has been a St. John's member only since May, when she decided to sign up after passing the place "a million times" on her kayak. The night I drop by happens to be Cobin's first-ever visit to the club, and she's invited two out-of-town friends to dine with her there. Staring out at the sunset, Cobin sums up the experience of her first visit with a simple exclamation: "This is beautiful!"