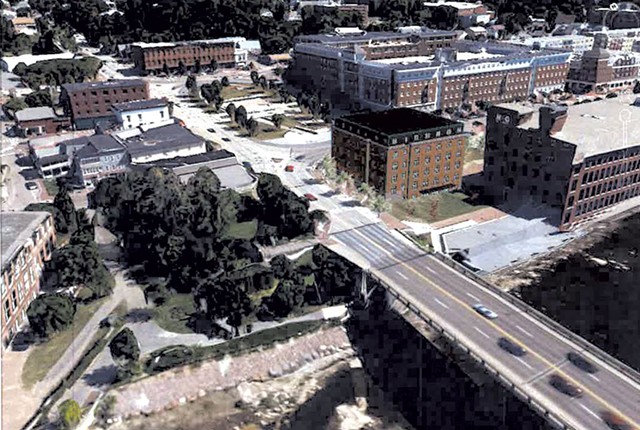 Two big developments are proposed for downtown Winooski: A seven-story boutique hotel could rise up on a parcel next to the bridge, before the traffic circle; and just past the north end of the rotary, a four-story building could include a 1,500-person performance hall.

Missing from both sets of blueprints, however, is one thing Winooski desperately needs: on-site parking. This threatens to hold up new construction and slow the surprising renaissance of the old mill city that, ironically, at one time revolved around a giant, often empty, parking lot.

Those days are over: The 924 spots in the city's sole downtown parking garage are frequently occupied during the day, and latte-drinking hipsters can be seen circling downtown blocks looking for metered spots on the street.

Resident Marcel Colin, a Community College of Vermont student who emigrated from the Congo three years ago, was wisely waiting at a bus stop on Winooski Falls Way last Friday afternoon. "When my friends come around, they always worry about places to park," he said.

That's why some local business owners have been critical of the proposed 97-room hotel next to the Champlain Mill — and are preventing it from moving forward under an obscure clause in a redevelopment agreement that dates back to 2004.

The hotel's detractors say its plan to valet cars at night to the city garage and to satellite lots during the day is unrealistic, given Vermont's prevailing car culture.

"Zero spaces for a 100-bed hotel. I think that's really the biggest issue," said Brian Tarrant, co-owner of the Champlain Mill and cofounder of its largest business, MyWebGrocer. There is already a "massive parking crunch downtown."

The Winooski City Council has thrown its full support behind the hotel, which would also have a 100-seat restaurant. The council voted to approve the project in March and to apply jointly with hotel developer Adam Dubroff for a $1 million state grant and a state environmental permit under Act 250. Dubroff bought the property in 2014 from PC Construction for $600,000.

But Dubroff still needs approval from other property holders who own lots in Winooski's "redevelopment zone," so named almost a half century ago, when the city demolished a chunk of the historic downtown in an urban renewal project that initially spawned a few squat, one-story buildings and acres of parking. City officials spared the city's former woolen mills, which were converted into apartment buildings and a shopping mall. The latter had closed by 2005, when downtown Winooski was basically redesigned and a second, bigger wave of construction gave rise to the traffic rotary, the city parking garage, new headquarters for the Vermont Student Assistance Corporation and the Spinner Place apartment building.

From that more recent effort came the Winooski Downtown Redevelopment Association*, a group of property owners that retains authority over a portion of public land known as Mill Park and Riverwalk West — a small patch of green in front of the Champlain Mill with a walkway that winds to the riverfront boardwalk.

Dubroff's 0.18-acre hotel lot, which is wedged between the Winooski River bridge, the rotary and the mill, has limited entrance options. He needs an easement from the development corporation to construct the hotel's circular driveway on that land.

But so far the group isn't budging. Last week, its members again declined to vote on the question as they continue to negotiate with the city and the developer.

One of their concerns is the use of public land for a driveway, said Tarrant, whose Champlain Mill is a member of the redevelopment corporation.

But the larger issue is parking: The city-owned garage is maxed out during the day, limiting current Winooski businesses from expanding.

And it's preventing other enterprises from relocating to the Onion City, according to Tarrant. "We've turned away terrific tenants that wanted to come to Winooski from Burlington," he said.

Dubroff thinks his parking plan will work. "Valet parking for urban hotels is very common," he said. He will probably hire "some young, athletic people to get the cars" and encourage guests to use a smartphone app to summon the valets — the latest technology at bigger city hotels, he said. Dubroff said he is confident that issues with neighbors will be worked out.

The Winooski Farmers Market currently occupies the land where the hotel driveway would be constructed. Dubroff said the market would have to shift slightly, but he wants it to stay on-site — and even to expand. The idea is for the hotel to be part of the "Winooski energy," Dubroff said, and to give guests access to the river, restaurants and the downtown street life. "A lot of times you travel, and you're next to a strip mall or a Denny's." He said he aims to offer something different.

Winooski's parking garage seemed plenty big when the $13 million structure was constructed 11 years ago. At first, the multitude of empty parking spots generated countless "build it and they will come" jokes. But eventually they did, and now workers at the Champlain Mill, VSAC, CCV and other businesses have locked up most of the garage's daytime parking spots.

"I have no ability to lease any more space," said Winooski City Manager Katherine "Deac" Decarreau said of the garage.

It's a different story at night, however, when day-shift employees go home and as many as 600 spaces become available.

The proposed performance venue, the Strand, is counting on those. But the developer, Burlington-based Redstone, must also find around 100 daytime spots to win approval from the city council.

Redstone is trying to buy an adjacent quarter-acre lot from the Veterans of Foreign Wars Post 1767 and build a two-deck parking structure there, according to the firm's Bill Niquette. A brick veterans' memorial would be moved to another part of the VFW lot, and the post would stay open. Redstone has offered to buy the entire parcel, but, so far, VFW members have declined.

Decarreau likes to say, "The first sign of success in a downtown is a parking problem." But she and others do recognize it as an economic deterrent and plan to study the situation this summer. The cost of a new garage is an obstacle. "They are not cheap," Decarreau said. "Thirty thousand dollars a space is not unreasonable to pay for a structured parking lot."

Another consideration is how many new spaces are necessary. "In a city, you don't want one parking space for every office chair," Decarreau said. "You've got to expect people to use public transit, to walk, to bike."

Last year, the city's first bike locker, which allows people to store bikes securely, was installed in front of the Champlain Mill.

The proposal for the Strand would include expanding sidewalks on Main and West Allen streets, to encourage pedestrian traffic. The city is also embarking on a parking study and considering a range of improvements: more bike racks, dedicated bike lanes and partnerships with property owners to lease vacant spaces on the fringe of downtown.

It's all part of the ongoing change in Winooski, which is nothing short of amazing to small-business people such as Gina Duvernay, who co-owns Aartistic Inc tattoo parlor on East Allen Street in the 19th century Winooski Block building.

She supports the hotel and the Strand. Both will exacerbate the parking problem, but they'll bring people to support all the businesses in the city, Duvernay said. "The more, the merrier," she said as she sat on a bench outside her shop last Friday afternoon.

On that day, cars whizzed by on the Winooski traffic circle while people walked around: college students in shredded jeans, professionals in suits and ties, immigrants from Nepal and Africa, dress-casual tech workers with their dogs, sleek-looking people climbing into expensive cars, and a skinny, unsteady man in pajama bottoms who rummaged in trash bins for returnable bottles.

The sun shone on the new construction that has filled the downtown in the last decade.

"Do you remember what Winooski looked like 10 years ago?" Duvernay asked in amazement. "We never thought it would be like this ... It's young and thriving."

Decarreau expects the pace of development to continue. In June, the city council will vote on proposed zoning changes that would increase allowable density on gateways such as Main Street and Malletts Bay Avenue. That's stimulated interest in construction. "There's a lot of people talking," Decarreau said. "Money's still relatively cheap. Interest rates are down." Winooski is hiring for a new position, community and economic development office director, to keep up with proposals.

Winooski resident Liz Longeri, who graduated from Saint Michael's College six years ago, is especially excited about the Strand. "It will bring a lot of cool culture back to Winooski that we don't really have," she said.

Longeri walks to local restaurants and shops and doesn't see parking as a major issue. The growth in Winooski is great, she said, with a caveat: "As long as my rent doesn't go up too much, I'll be happy."