The Spirits That Move Them

A new wave of artisans is distilling Vermont's landscape 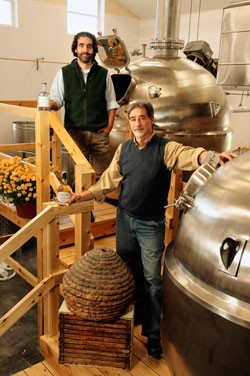 The invisible but pungent vapors that swirl through the Caledonia Spirits & Winery distillery in Hardwick are most intense in the loft, where clear alcohol spins through a glass coil and drips into a jar. As I watch, head distiller Duncan Holaday appears with two small samples drawn at different times from this batch. “Try some,” he urges with a smile.

Each sip of fresh vodka passes over my tongue like liquid embers. One sample prickles the sides of the mouth; the other has more depth, but also a hint of beguiling sweetness. These are the first and second “cuts,” or the samples that distillers decant in their quest to capture the purest alcohol from a distillation. Caledonia Spirits owner Todd Hardie describes this process as the heart of distilling. “The alchemy, the beauty of it all, is where to make the cut,” he says, or the break between the sharper and purer alcohols.

The beauty also lies in the base of his Barr Hill Vodka (and its cousin, Barr Hill Gin): Vermont honey, which is fermented and then distilled until its vapors waft up the glass fractionating column, hit cold plates, condense and are collected in jars.

The first alcohols to rise during this process, such as methanol, are lighter and sharper tasting; distillers monitor when these vapors shift to the “heart of the run,” or the purer ethanol with soft hints of the honey base. Clarity, flavor and temperature all help determine where to make this cut — or, as Caledonia Spirits general manager and co-distiller Joe Buswell describes it, to recognize the moment when the spirits change “from nail polish remover to vanilla.”

Hardie, Holaday and Buswell are participants in a modern distilling revival in Vermont, blending the fruit, flowers and other products of the local landscape with their own imaginations: brandy made from local apples; a cordial from elderberry flowers; rum, vodka and liqueur from maple sap. Soon there will also be whiskey made from local corn.

Fourteen entities now hold distilling licenses in Vermont, many of them so new that companies such as Stowe’s Green Mountain Distillers and Quechee’s Vermont Spirits Distilling Co. — founded in 2002 and 1998, respectively — are veterans by comparison. Some distillers are enticed by a recession-proof product and a buoyant market for local goods; others, including Hardie and Holaday, are also guided by a long-held passion for harnessing the local landscape and capturing it in a bottle.

Despite its apparent novelty, batch distilling is not new here. In the early 18th century, Vermont was dotted with breweries and micro-distilleries, but these were eventually shuttered in the fervor of the state’s temperance movement — Vermont banned alcohol in 1852, long before federal Prohibition. Though alcohol was legalized again in 1933, temperance still cast a long shadow on the state, and distilling took decades to appear again.

Hardie had little inkling that he would one day make spirits when he began producing and selling raw honey in the 1970s. Coincidentally, the land in Morses Line where he first kept bees, which straddles the Québec border, had been the site of the Prohibition-era speakeasy Bucket of Blood, where Vermonters could get soused at the Canadian end of the bar.

Over the years, Hardie and his colleagues added propolis and beeswax to their product line. Eventually, though, they gave away their hives to friends, and three years ago launched a winery on the banks of the Lamoille River in Hardwick. They now use the honey their friends produce for a line of aged-honey wines and spirits.

Any starch can be converted into a spirit, but not many distillers have thought to use honey. Hardie believed that it would render a superior spirit, soft and round. With his sandy hair and honey-colored eyes, Hardie looks as if he’s taken on the hue of his lifelong passion. Last year, he hired distilling veteran Holaday to design and build one of his customarily precise stills. As it took shape, the pair began tinkering with batches of honey-based vodka and gin, as well as a whiskey.

Hardie and Holaday gradually unearthed the mysteries of honey’s fermentation. They learned, for example, that “honey likes to ferment a little colder,” as Buswell, who joined the company last year, observes — and a colder ferment takes longer. Three weeks seems ideal. Once distilled, it yields a beguiling, slightly sweet and herbaceous spirit. “The vodka has a very complex profile of flavors that the bees give to it,” says Holaday.

If there is a pioneer among Vermont’s craft distillers, it’s Duncan Holaday. Before moving with his family to some family-owned land in Barnet, Vt., he was an anthropologist and educator working in Singapore. Holaday pondered ways to make a sustainable living in the northern forest. Fourteen years ago, he tapped the hundreds of maple trees that surrounded him, built a custom still and began distilling his boiled sap into vodka. He called the company Vermont Spirits.

Holaday made the crisp and slightly sweet Vermont Spirits Gold — as well as Vermont Spirits White, vodka distilled from milk sugars — for five years. Then, national press catapulted awareness of his products, and production grew. He took on a partner and stakeholders, and built an office on his land just down the driveway from the distillery.

This summer, Vermont Spirits moved — still, office building and all — to Quechee, where the company has resumed production and will open a tasting room later this year. On Holaday’s land in Barnet, the cement foundation of Vermont Spirits’ former offices remains, as does the wooden distillery where the company began. Though he still has a stake in the business, Holaday alludes to the difficult time when he was separated from the products and company he founded, and left with the “rags and bones” of the old distillery.

The allure of distilling continued to pull him, though. “After a few months, I thought I better do this again,” Holaday says. “Fortunately, I found good people, or rather they found me.” He was hired to custom design the Caledonia Spirits still, and simultaneously began plotting his next spirit.

This time, he decided, he was going to make rum. Holaday reopened the distillery on his property in Barnet, and set to work again on still design and construction and tinkering with formulas.

Walking into the sun-drenched Dunc’s Mill distillery is akin to entering a lab. A hodgepodge of fermentors, stills and glass demijohns fill the multilevel space. In one corner, a white tub holds an experimental infusion of elderflowers and hibiscus; nearby, a nascent whiskey dribbles into jars. In the center of it all, fresh, clear rum travels up a tall, fractionating glass tube and into a jar.

Holaday became intrigued by the idea of making rum as he read about its roots. “What we’re doing is playing with the history of rum, which is a history of mistakes,” says Holaday — or the happy accidents that can yield new flavor profiles. “I made the mistake of scalding [some sugar] and I thought, Oh, this is terrible. But we realized we were doing all the wrong things right.”

Though the organic cane sugar he uses comes from afar, Holaday adds a local spin with flavors of elderflowers or his own maple sap. He calls maple “a beautiful fermentation,” and boils his sap to make the amber-colored, gentle and sweet Dunc’s Mill Maple Flavor Rum. In spring, Holaday and his young assistant distiller, Daniel Keeney, gather hundreds of white elderflower blossoms. “We put them into a simple sugar-water solution, and after a few days we get that beautiful aroma,” says Holaday. Hence, Dunc’s Mill Elderberry Flavor Rum.

Both rums were released earlier this year, and other spirits will come. On a recent afternoon, Keeney monitors a batch of raw corn whiskey as it travels up a glass fractionating still and condenses on a glass coil into jars. He and Holaday are also aging rum in small oak barrels, constantly sampling to note how the flavors evolve.

These spirits express the unique goût de terroir of this corner of Vermont, Holaday believes. He envisions a time when tourists can wander the state sampling the essence of each locale they visit. “It’s about appreciating what a place can do — water from the springs, wood from the land, sugar from maple trees.”

Hardie, Holaday and other distillers applaud the Vermont Department of Liquor Control for being nimble and responsive to their needs. New legislation allowing on-site tasting rooms and sampling at farmers markets is fueling expansion. Price might remain a barrier for some Vermonters, though. Like Vermont Spirits vodkas and Shoreham’s WhistlePig Straight Rye Whiskey, Barr Hill Vodka fetches premium prices: A 375-milliliter bottle costs $32.

Honey is expensive to produce, Hardie points out, and harder still to ferment. But he thinks the final product is worth it. “I did not know, even with a bachelor of science in agriculture, that the way you’re taking care of your bees and your people goes into every product, every bottle,” Hardie says. “With a strict science background, they don’t teach you that, but it’s true. The consumer will know the difference between a good and a mediocre product.”

A mini-wave of local whiskeys is poised to appear in the state soon, including Appalachian Gap whiskey from a distillery in Middlebury, and a 10-year-aged whiskey from Green Mountain Distillers, which will be released in three years or so. In Vershire, Flag Hill Farm hard-cider makers recently created Pomme-de-Vie, an apple brandy inspired by the French Calvados. Vermont Spirits will release an apple brandy next year, as well, and Holaday is designing a custom still for a group in Richford but won’t say what they’ll distill.

Within a decade, Vermont may well be known as a craft-distilling epicenter.

“To transform something from an agricultural product, and to process, package and deliver and bring it to the stores is a minor miracle,” says Hardie. “It’s very humbling.”