If there's one adjective that's been used again and again to describe Burlington indie-pop band the Smittens through their 16-year run, it's "cute." And if you've ever listened to their music, seen them perform or even hung out with them, you'll surely agree that "cute" is a perfectly accurate description.

The sextet's melodies are darling and insanely catchy, with glistening chord progressions free of sonic conflict. Its songs are frequently outfitted with cheeky titles such as "Gin and Platonic." Onstage or off-, the Smittens could charm the pants off even the most hardened curmudgeon. You can see for yourself on Friday, November 2, when the group performs at Burlington's Radio Bean.

But to reduce the band to its cuteness is shortsighted. As the Vermont-based Smittens — Holly Chagnon, Colin Clary, Dana Kaplan and David Zacharis — sit around a backyard campfire on a nippy fall evening, Zacharis points out something about the band's name. (The other two Smittens, Max Andrucki and Missy Bly, currently live in New York City.)

While the word "smitten" might evoke Disney cartoon animals making googly eyes at each other or the giddy feeling you get in fourth grade after receiving a Valentine from someone you like, the term, Zacharis notes, "comes from being struck, being smote." 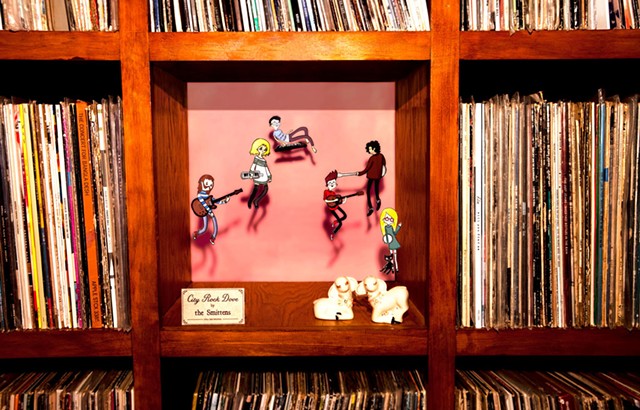 That clarification highlights the nuance of the Smittens' work. Sure, their music is plenty sweet, but you need only look to the band's new album, City Rock Dove, to see that real issues wrought with emotional complexity lie beyond the aesthetic of cuteness. The new album further exemplifies how the band functions as a six-person democracy with four gifted songwriters: Andrucki, Bly, Clary and Kaplan.

It's remarkable that the group is even still together after so many years. Not that there's an age cap on rock bands, but all of its members are now older than 40.

"Part of the longevity of the Smittens is how we [adapt] and shift with the circumstances of everybody's individual lives," says Kaplan. "I think we became aware pretty quickly that if we wanted to continue to be creative together, one of the best ways for us to have impact was to focus on making records."

Live Smittens performances are now few and far between, especially local ones. They've played the UK, where they have a staunchly loyal following, more recently than they have Burlington. Their Radio Bean gig will be their first in the Queen City proper since 2012. (They have, however, played Winooski annually for the last several iterations of the Waking Windows music festival.)

As much as they'd like to perform more, the Smittens say, shows are less feasible with one-third of the band living out of state — not to mention having kids, careers and lives outside the group. But the members make a habit of coming together for multiday sessions whenever they can, not only to work on music but just to be together as friends.

They describe their process of bringing songs to the table as one full of encouragement.

"I was a little trepidatious," says Bly by phone about pitching her song "Love Is a Word" to the group. "I started thinking about all these ways that love is. It can hurt; it can be great, crummy or just, like, normal. I was like, 'Is this too corny?' But they really ate it up."

"We were like, 'We need to record this now,'" says Chagnon. "It's one of my favorites."

Beyond being about romantic love, the song has a political bent. It was recorded just two weeks before the 2016 presidential election.

Kaplan calls "Love Is a Word" a reflection of the changing political climate when it was written: "Thinking about love as a political act has been a thread of the Smittens throughout time."

Andrucki was likewise apprehensive about one of his new tunes, "Cats for Cats," even though he couldn't shake the opening melody when it first popped into his head.

Tinged with darkness, the track begins with Andrucki singing the phrase "Masc 4 masc / Take off your pants." Anyone familiar with Grindr or other gay hookup apps knows the phrase "masc 4 masc" refers to traditionally masculine men seeking the same in a sexual partner — a much-criticized preference often viewed as internalized homophobia.

"I didn't want to do a critique of gender performance in gay male subculture," says Andrucki by phone. "That's kind of overdone. But, nevertheless, [the song] persisted." He says he waited until late in the recording process to bring the song to the band, his hesitation born of embarrassment. "I thought it was a cheesy, tacky idea," he explains. "But they were like, 'You need another song on this record.'" 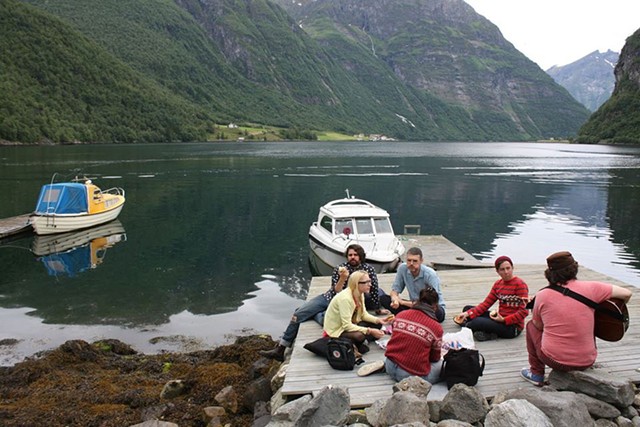 "This record was probably more difficult for me than other records just because, as we all got better and more experienced in the studio, there are more options for what people can do," says Clary. "[Should we] zig or zag? Last time we zagged, so I think we should zig this time."

City Rock Dove has been in the works for quite a while. In fact, the tracks "Three States," "Prince of Sweden" and "On the Back of Butterflies" were recorded as far back as 2013.

"We started recording one record and kind of cannibalized it into two," says Zacharis.

For myriad reasons, the EP Love Record Breaker was finished first and released in 2014. But the delay in releasing another full-length led to one of the group's most significant artistic accomplishments to date.

Kaplan, who is transgender, penned the album's opening track, "Three States." But that was before he began taking testosterone in 2015.

"It became clear over time that my voice was not resonant with how I felt inside," he says.

When the time came to revisit the song, which had been shelved before the release of Love Record Breaker, Kaplan's voice was markedly lower than it had been when the song was recorded.

"I think there was a moment of recognizing enough time had passed from the original vocals that, in some ways, we had a different instrument to play with," says Kaplan. "I heard the [old] vocals and thought, That's not all there is right now."

Before finalizing the album, the band went back in to add Kaplan's current voice to the track, commingling it with his pre-testosterone vocals. It's especially powerful given the meaning behind the song.

"I told you what you wanted to hear / Your reply was my biggest fear," he sings.

"It's sort of saying, 'Fuck you, world,'" Kaplan notes. "It's more painful to try and not do the thing you need to do than it is to keep it in. So much of it is about reconciling with being true to who you are and what that means against other people's expectations and fears."

City Rock Dove shows that the Smittens are as sharp as ever, fully attuned to each other's needs and still finding new ways to express themselves.

"At this point, it's about family coming together and pushing each other to see what we can do," says Kaplan. "There have been moments when we thought, Well, maybe this is the last record. At this point, we're committed to each other and seeing what else is there. Maybe one day there won't be any more songs. But it hasn't happened yet."

The original print version of this article was headlined "Cute Story"