The Skinny on the Chubby

How does a new Burlington spot sell local lunches for less? 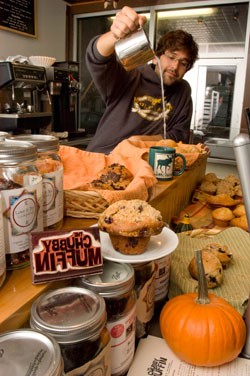 At The Chubby Muffin, a new breakfast and lunch spot on Oak Street in Burlington’s Old North End, the surprise isn’t the muffins. It’s the burger, which comes on a nonchubby muffin of the English variety. The quarter-pound patties sometimes arrive with a streak of bright pink in the middle; other times they trend closer to well done. But regardless of how the meat is cooked, it’s always juicy and flavorful. Cheddar and “Special Sauce” are included. Spinach, mushrooms, bacon and other fixings can be added for a fee.

At $4.95, the Muffin’s basic burger costs about what you’d pay at other shops in the vicinity, says Victor Lawson, whom we found eating there recently. A 2004 Burlington High School grad, Lawson grew up nearby and refers to the eatery’s neighborhood as “pretty rough.”

Here’s the surprise: At the new café — owned by Benjy and Jonny Adler, who also own the Burlington and Montpelier Skinny Pancakes — the English muffins are made in-house, the cheese comes from Cabot, and the beef is local. The reasonably priced breakfast sandwiches, hot dogs and pulled pork with slaw are made with Vermont meats, too. That’s not something you’ll find at the mom-and-pop joint down the street. But at most localvore restaurants around Chittenden County, a burger fix runs $10 to $14.

Lawson, who says he’s “jobless like everybody else,” doesn’t really care where the beef grew up as long as the price is right. Like others in the neighborhood, he notes, he initially avoided the Muffin because of a perception that “it’s a hippie joint.” His first visit last Thursday changed his mind. “I feel better about it,” he says. “It’s definitely not a hippie joint.”

The Adlers’ Skinny Pancake may not be a “hippie joint,” either, but some local diners see it as a hipster joint — with prices to match. With the Chubby Muffin, have the brothers made good on their promise to serve local food regular folks can afford? If so, how’d they do it?

Lawson’s testimonial would probably please Benjy Adler, a Middlebury College grad who ran a crêpe cart during summer breaks and got into the food business full time after graduating. He may be a self-described “proud capitalist,” but the young professional doesn’t identify with Gordon Gekko. Adler’s brand of enterprise “is the furthest thing from greed,” he insists. “It’s in the immediate self-interest of a socially responsible company to make sure the books are balanced.” Adler is convinced that “consumer power directed with social consciousness” can change the world.

To that end, managers at the Pancakes and the Muffin focus on something called the triple bottom line, a way of measuring a company’s success in terms of its ecological and social performance in addition to its financial stats. The goal: “To make local food affordable and accessible and part of people’s everyday diets,” says Adler.

But the flagship Skinny Pancake, with its prime location on the Burlington waterfront and prices that creep toward $13 for some of the fanciest items — such as a savory herb crêpe stuffed with local chicken and ham, caramelized onions, Gouda, cheddar and Jarlsberg, and topped with a Dijon cream sauce — doesn’t always feel like a place that serves people from all walks of life.

There’s nothing wrong with feeding foodies. But at the Muffin, judging by the clientele, the company’s social mission seems to have come more fully to fruition. During the nine o’clock rush, the staff sells coffee, muffins and breakfast sandwiches to weathered men who zip in and out in battered pickup trucks, young women in exercise attire and professionals taking advantage of the free Wi-Fi.

Charlotte Blend, director of development at Rock Point School, fits into the third category. She nibbles on an oversized “chubby” blueberry muffin and sips a double latte as she works on her iPad. Her reason for visiting the spot is its proximity to her daughter’s daycare. “I thought I would come here because it’s in the neighborhood,” she says. Her assessment after one visit? The latte is a bit weak, but the music, the muffin and the service are all great.

The service is courtesy of friendly counter staffers Rob Blum and Michael Cyr. Cyr, a longtime Pancake staffer who switched to the Muffin, takes orders and jokes with patrons. He says he’s excited to work at the new location because it has a “neighborhood vibe” and a pace that allows him plenty of time to interact with customers.

Cyr is also pleased with the attention given to sustainability behind the scenes. While he makes tea and rings up treats, two prep guys in the kitchen preserve the last of the harvest and whip up sauces for all three restaurants. Hundreds of pounds of blueberries are already ensconced in the sizable freezer to be used in crêpes and pastries all winter. Also in the freezer: a bunch of Misty Knoll Farms turkey that Adler was able to score for a great price. Because of the storage space at the Muffin, he says, the company can buy in bulk and pass the savings on to the consumer.

Given that the Muffin serves as a commissary kitchen, its location — approximately halfway between the Burlington Intervale and the Skinny Pancake — is no accident. Siting it in a lower-rent neighborhood fits nicely into the mission-driven portion of the business strategy — and, on a practical level, it has allowed the company to buy the building and start building some equity. “It’s ideal from a symbolic perspective,” Adler says. “It’s really thrilling to see all these things meet.”

To serve the community during off-hours, the Adlers have partnered with City Market to offer free cooking classes at the Muffin on topics such as making and canning apple butter and turning cabbage into sauerkraut and kimchi. Additional classes are in the works.

Low overhead is one reason for the Muffin’s affordable prices, but Adler shares another. When you buy certain cheap cuts of meat — such as ground beef — the gap between local and mass-market prices narrows, he says. The ingredients of the $5 burger are inexpensive enough that Adler can price it according to what he calls “conventional food-service wisdom,” meaning that the customer’s cash covers ingredients and labor and operating costs while giving the eatery a bit of profit.

Keeping things running smoothly at multiple operations isn’t easy. Over the years, the often-lackadaisical service at the Burlington Skinny Pancake generated some complaints. So, in the spring, the Adlers decided to hire an expert. Chris Benjamin, formerly the food and beverage director at The Essex Culinary Resort & Spa, came on board at the beginning of June.

Now all three locations have policies in place to deal with issues such as timeliness and how to greet customers. Benjamin is working on checklists that help staffers “understand the social message, take crêpe orders and spin a crêpe correctly,” among other things. With these systems formalized, Benjamin suggests, all the eateries will be better able to serve guests.

Beth Isler, who works at Resource Systems Group — located in the same building as The Skinny Pancake — says she’s noticed a difference in the service since Benjamin came on board.

And, after one visit, she’s already impressed with the Muffin. Isler calls her breakfast sandwich “perfect,” praising the homemade English muffin bun and general lack of greasiness.

She has another motive for stopping by. “I want to support the ‘affordable food movement,’” Isler says. “Even if the sandwich wasn’t quite as good as it was, I would probably go back just for that … And I love the location.”

If the Muffin can keep attracting the frugal lunch crowd along with the idealists, it might plump up the Adlers’ young company, too.