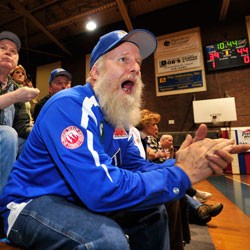 Dick Rouelle is impossible to miss at a Vermont Frost Heaves game. His ZZ Top-esque beard, wispy and white, commands attention in the Barre Municipal Auditorium. The bearer of that prodigious facial hair looks like he might be more at home in the woods living with wild animals than sitting courtside at a professional basketball game.

But make no mistake: Rouelle is a basketball fan to the core. The beard is bracketed by flushes of royal blue — a Frost Heaves cap on top, a baggy team shooting shirt below. In his hands Rouelle clutches a team jersey given to him by former player Melvin Creddle. He takes it to every game, never letting it leave his side. It’s the only thing in the world that’s been to more Frost Heaves games than he has.

The 55-year-old is, by all accounts, a Frost Heaves superfan. He arrives early for the warm-up, critiquing endless layups and jump shots, and lingers postgame while the guys sign autographs and slap hands. If Vermont’s only professional basketball team were a rock-and-roll band, Rouelle would be their No. 1 groupie.

His journey to superfandom began with a fist bump during the Heaves’ first season. Rouelle, an electrician from Calais, was already a huge basketball nut and figured it would be fun to check out the new team in town.

Before the start of Rouelle’s debut Heaves game, Antonio Burks, a 6-foot-6 power forward, ran over to the slight man with the long white beard and extended his fist. Rouelle bumped back.

He was hooked. “There was magic in those knuckles,” Rouelle says.

Since Sports Illustrated writer and Cornwall resident Alex Wolff brought the Frost Heaves to Vermont in 2006, Rouelle has attended 102 consecutive games. He’s followed the team — which is part of the Premier Basketball League, considered a step below the NBA’s developmental league — to Maryland, New York, Ohio and eastern Canada. To reach a game in Oklahoma, he and his wife, Linda, once braved an ice storm that shut down the interstate.

Rouelle isn’t the team’s only megafan. But he’s one of a group of central Vermonters who’ve taken their loyalty a step further — they now own and run the team.

Over the years, the Heaves have endeared themselves to the people of central Vermont, where they are based, by visiting area schools, holding clinics, and hosting meet-and-greets at local restaurants. After the games, the players pose for photos and sign autographs on the court, even when they lose.

The fans reward the players’ good citizenship with staunch loyalty. Some bake cookies and brownies for the team at every game. Others make the players Christmas presents. Still others, like Rouelle, go to extreme lengths to watch them play, whether it’s at their home court at the Aud or in frigid Nova Scotia.

The Heaves fans are the only reason the team didn’t fold when former owner Mike Healy was about to pack it in after last season. A core group of devotees hammered out a plan to purchase the team from Healy and, over the summer, Go Heaves, Inc., received official nonprofit status from the state. Like the NFL’s Green Bay Packers, the Frost Heaves are now run by the fans who come to cheer them on.

One of those fans, Don Mandelkorn, who recently retired from the Agency of Human Services after 30 years, became the team’s general manager. Rouelle and his wife and seven others were tapped for the board of directors. After months of planning, number crunching and hand wringing over whether this collective could pull off a season, the Heaves’ sixth campaign fell into place.

To Rouelle’s chagrin, the team succumbed to the Halifax Rainmen in its January 2 season opener. But these are early days, and Rouelle is nothing if not confident in his Heaves.

Rouelle is so gaga for Frost Heaves basketball that he can tell you all the players’ stats, and he knows all their strengths and weaknesses. Plus, he’s pals with the guys. He and Linda have them over for dinner and take them snowmobiling — a novelty for men who mostly hail from urban areas. Rouelle has even been known to miss one of his stepgrandson’s basketball games if a Heaves contest happens to be at the same time.

Other fans are equally enthusiastic, including Linda Rouelle, Mandelkorn, Mike Squier and Theresa Wood. But Rouelle has outdone them all in attendance: In the past four years, he hasn’t missed a night in the Heaves’ 20-game regular season.

Rouelle never played basketball as a student at U-32 High School in Montpelier. Instead of pounding the boards after school, he washed bowling balls and patched pins at Twin City Lanes for $1.25 an hour — a job he started at age 14. As one of six children of a stonecutter and a housewife, Rouelle had to help support his family. But he harbored a love of basketball even if he couldn’t play.

When he finished high school, Rouelle stayed on at Twin City Lanes for 28 years and eventually worked his way up to manager, a position he held for the last 10 years of his employment. That’s where he met Linda, to whom he has been married for 30 years. Rouelle used to put notes in the finger holes of her bowling ball with suggestions on how to improve her game.

Over the years, Rouelle became a passionate follower of the Los Angeles Lakers. Magic Johnson was his basketball hero, and Lakers games took precedence over everything else in his life. “If there’s a Lakers game on, I don’t care what I want to watch,” Linda Rouelle says. “The TV is his until the game is over.”

But it’s not just pro basketball that gets Rouelle’s heart pumping. When his stepgrandson Stephen Donahue’s team plays, Rouelle will stay and watch all the games, not just the 13-year-old’s. “I’ll watch everything from third or fourth grade on up to professional,” he says. “I can’t explain it. It’s like an addiction. My drug of choice is basketball.”

After the first Heaves season, Dick and Linda decided their Christmas present to each other would be to make all the team’s road games. Fan-led charter buses were already traveling to the closer ones in places such as Québec City and Montréal. The Rouelles, along with Mandelkorn and some other fans, came up with the idea of a “fan van” to take them to more distant games, such as ones in Oklahoma and New Brunswick, Canada.

That year, a handful of Heaves heads traveled to various away games to cheer on their team. Not all of the loyal supporters made it every time. But the Rouelles and Mandelkorn did.

The following two seasons, it was just assumed they would hit all the away games again. The commitment required was sometimes a little obsessive.

During the third season, the group traveled to Buffalo. They left Barre on a Friday evening, drove eight hours to western New York, stayed overnight in a hotel and went to the Heaves game the next day. From there, they drove 20 hours to watch the team play in Halifax, arriving an hour before game time on Sunday. When the fans left on Monday morning, Rouelle says, he was so delirious that, by the time they crossed into New Hampshire, he was relying on the double yellow line to navigate.

While this kind of dedication might be seen as a little crazy — or, when it involves long-haul driving, dangerous — it has been a “positive influence on the team,” says Heaves head coach Joe Salerno. Fans have helped enhance team chemistry and given the team extra motivation for winning. Without their devotion, there would be no team, he reasons.

Salerno had his doubts about whether fans such as Mandelkorn and the Rouelles could save the team through their passion alone. In early summer, owner Healy told Mandelkorn of his plans to fold. But by late June, Go Heaves, Inc., was in place. At least for now, fan teamwork is keeping the Heaves alive.

“I’d be lying if I said I wasn’t a little suspect as to whether or not it could get done,” Salerno says. “But I’m extremely proud of the fact that it has happened. The love these fans have for the team — people wanted [the team] to come back.”

For Rouelle, following the team — and being part of the organization through Go Heaves, Inc. — has been a dream. He says he can’t thank Alex Wolff enough for bringing the Heaves to Vermont.

“Who knows what I’d be doing now if I wasn’t following the team around? It’s hard to even think about what I was doing back before they came,” Rouelle says. “This has really changed my life.”

This year, like all good things, Rouelle’s perfect attendance streak ended. After watching 102 consecutive Heaves games, he quit traveling. He didn’t want to, but the cost of gas and hotels proved unmanageable.

So, Rouelle missed his first toss-up on January 20. When the Heaves fell to the Bluegrass Stallions of Georgetown, Ky., neither he nor his wife were there.

Neither was the jersey that had been to every Heaves game, the one that Rouelle carried for good luck. After the Heaves’ home win against the Dayton Air Strikers on January 15, Rouelle handed it to his wife and said, “You can retire this now. This is the end of my streak.”

It was a sad moment for both of them, but Rouelle is at peace with his decision. He’ll still attend every home game, and maybe some of the closer away games. And he’ll still be a Frost Heaves superfan.