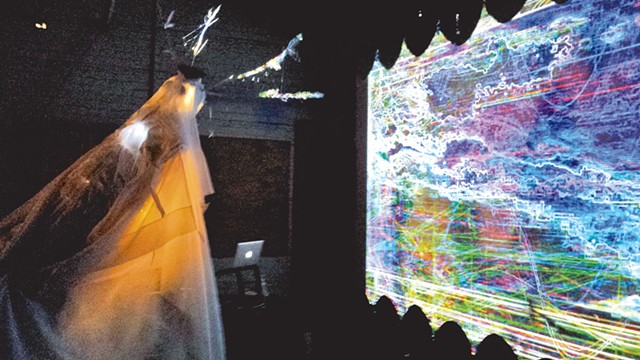 Described on its website as "an experiment in rapid performance development," the Simulacrum Project is certainly nothing if not an experiment. Since September, an eclectic lineup of artists and bands has been electrifying the space at 339 Pine Street, an offshoot of Burlington City Arts, every Wednesday and Saturday night.

The series kicked off during this year's South End Art Hop with sets from DJ Gabriel Night, who can usually be found spinning at Insurrection, a monthly goth and industrial dance party. Over the following few weeks, Night was followed by artists including cabaret performer Richard Siday, Champlain College professor Al Larsen and Sean Clute, who founded the Media Arts Research Studio at Johnson State College.

The mastermind behind the project is Leif Hunneman, 45, a Burlington maker, musician and self-proclaimed geek. What kind of geek? Electronics, computer, video. "I've been doing improvisational video with DJs for three or four years," Hunneman says. His band, }hexdump{, will celebrate its 20th anniversary at a Simulacrum Project performance this Saturday. Inspired by computer coding, the band name alone suffices to indicate that Hunneman has been at his geekery for some time now — a lifer.

"[Burlington City Arts] asked me to do some video art, and then I got carried away," Hunneman explains. In May, BCA approached him about bringing some of his video work to the 339 Pine location; he had a finalized artist lineup by July. The project is sponsored by BCA and Generator, where Hunneman is a dedicated studio member. The two organizations may have gotten more than they bargained for — 14 performances from various artists and bands (and one film collective, the Green Mountain Gore Society) whose common denominator is Hunneman.

The Simulacrum Project artists have at least two more things in common: a predisposition for interdisciplinary pursuits and what appears to be relative lack of fear of the unknown. Artist descriptions include words such as "hybrid," "mysterious" and "alchemy."

On top of his experience as a cabaret performer, Siday recently orchestrated a series of educational "sound laboratory" workshops for Phish. The Green Mountain Gore Society, which describes itself on Facebook as a "hovering, disembodied brain child" dedicated to screening cult films, will expand its focus at Simulacrum by hosting a horror-centric dance party, billed as an "Interactive Italo-Disco Horror Movie Experience You Dance To!" With its varied roster, the heart of the Simulacrum Project seems to be a good-naturedly defiant refusal to be classified.

"It's an artist toolbox concept," says Hunneman. One tool he's been developing involves micro-sensors that allow artists to "emote," controlling images on a screen with their motion. For the uninitiated, he likens this to the technology behind the Wii, or physical interaction within a virtual setting. "The sensors are something I've been cooking up over the last couple of months. [The Simulacrum Project] seemed like a perfect opportunity to try them out," he says.

This past Saturday, it was Athena Kafantaris' turn to experiment. While she didn't make use of Hunneman's micro-sensors, she did work with him to develop a switch-controlled LED panel integrated into a costume — which Hunneman then wore.

Kafantaris describes her work as exploring family structure, loss and transformation, and her performance "Triggerbox Mixtape" evoked all those things. A video title card depicting an actual mixtape introduced its two sides, "Spool" and "Unspool." Each of these performance segments included a handful of video content set to music, most of which was accompanied by costumed dance from Kafantaris. Her friend Nikki Laxar also performed, and Hunneman himself danced in the opening scene. Audio recordings of myth scholar Joseph Campbell were interspersed throughout.

Besides the video, audio and performance components, Kafantaris displayed DIY creations fitting an otherworldly theme. A "Sky Beast" had round lightbulb eyes and stick antlers; another sculpture had a floor-length "beard" of unraveled film. The final "track" of the tape featured Kafantaris engaging directly with a photograph of her mother on screen. Kafantaris notes that the entire piece was developed in less than two months.

So leave your need for certainty and fixed categories at the door, and get a peek into Burlington's mashup of art, tech and wild improvisation. Here be dragons.