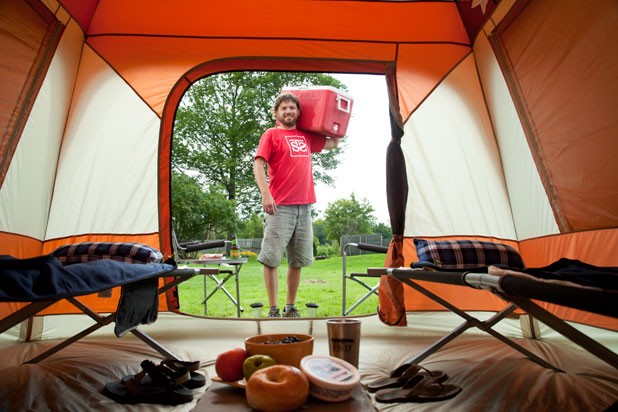 What shapes your experience of a weekend music festival — that is, besides the music? Weather, traffic, bad acid? Try being unprepared for camping. Did you forget ice? Enjoy those warm cans of Bud Light, bro. Is that a raging thunderstorm on the horizon? Better hope that $25 Walmart pup tent holds up. Did you charge your phone? Hey, surely a half-charged iPhone battery will be fine for three days. In a field. In the middle of nowhere.

In short, if your campsite sucks, not even the headiest 20-minute guitar solo or transcendent third encore can unharsh your mellow.

“Go to any festival, and you’ll always see otherwise happy couples screaming at each other trying to set up their tent. And that’s just the first day,” says Jay Morgan. “Having a lousy camping experience is probably the No. 1 thing that ruins festivals for people.”

Morgan is the owner and operator of the Show Sherpa, a Vermont-based company that offers music fans ready-made campsites designed to take the rough out of roughing it at festivals. For the past two summers, he has employed his “tent hotel” concept at festivals such as FloydFest and the Festy Experience in Virginia, DelFest in Maryland and Wanderlust in Vermont, among others. Morgan’s “Sherpa Village” is composed of some 40-plus large tents, each outfitted with cots and camping lanterns that double as flashlights. The village also includes a raft of cozy camp chairs and common tents for communal hangs, and a kitchen outfitted with camp stoves, coffee and other homey amenities.

On a recent Saturday morning, Morgan is welcoming guests arriving for the Festival of Farmhouse Ales at Hill Farmstead Brewery in Greensboro, Vt. (In addition to music fests, he sets up camps for weddings and the occasional beer festival.) In a field below the brewfest stage and tasting tent, Morgan’s neat rows of green and orange tents — about 25, each tall enough to stand in — stand in proud contrast to the mishmash of hastily erected private tents on the outskirts of the camping area.

As he directs new arrivals to their tents, Morgan makes small talk — today more about beer and the cool weather than about music. When campers compliment his setup, he flashes an easy grin from beneath a well-worn red trucker cap bearing the Show Sherpa logo.

“People are always surprised when they get here,” he says, chuckling. “It’s not like we’re gonna take your money and give you a lousy tent.”

Morgan, 39, is a Virginia native who moved to Vermont in 2003. He’s been a regular at music festivals all over the country since 1996. If you were a festivalgoer during that time, you may have seen him: the guy with the immaculate, fully outfitted campsite surrounded by a shantytown of half-assed nylon tents.

“I’ve always been an outdoorsy, campy kind of guy, and most of my friends lack that skill,” says Morgan, a self-described camping gear head. “So I’d always bring extra stuff because I knew people would need it.”

Mike McKinley is one of those friends. He’s the publisher of State of Mind, a Burlington-based music magazine and website. McKinley and Morgan were longtime neighbors in Burlington who often camped together at festivals such as moe.down and Gathering of the Vibes.

“If it was 90 degrees, Jay would set up camp where there was plenty of shade,” McKinley recalls. “If it was raining, you were dry. If you’re like, ‘Hey, my phone’s dead,’ he’d be like, ‘Here’s a charging station.’

“He makes everything comfortable, and he’s really good at it,” McKinley continues.

Morgan is so good at making his friends comfortable that his absence three summers ago from Camp Bisco — a festival thrown by the Disco Biscuits in upstate New York — inspired the Show Sherpa idea.

“We told him we would have coughed up money for him to go,” McKinley explains of that Morgan-less Camp Bisco. “One, we’d get to hang out with Jay. And two, we’d have been comfortable all weekend because he takes care of shit.”

In 2011, Morgan was laid off from his job at Peregrine Outfitters when the Williston-based outdoor-gear wholesaler merged with a Utah company, Liberty Mountain. With time on his hands, he began brainstorming ways to work for himself. That’s when Morgan recalled McKinley’s Camp Bisco proposition.

“That was kind of the ‘aha moment,’” Morgan says.

He sent a survey to friends asking if they would use a camping and gear service at festivals. Those friends sent it to other friends. In total, Morgan says he got 500 responses, most of them conveying a resounding yes.

Using his wholesale gear connection from his Peregrine days, Morgan purchased his first fleet of tents, and the Show Sherpa was born.

Some historical context: The year 1996, when Morgan started attending festivals, was also roughly when the model for modern music festivals developed, thanks in part to late-’90s Phish festivals such as Clifford Ball, the Great Went and Lemonwheel. Those precipitated an explosion of festival culture.

But here’s the thing: All the teenagers and twentysomethings who had no problem winging a campsite back then — or were too high to care — are now in their late thirties and early forties. Like Morgan, many are married with children. In other words, a generation of Phish heads has grown up and found itself less inclined to sacrifice creature comforts for the sake of jamming out.

“There is an older crowd now who want it to be easy and comfortable, and they’re willing to pay to do that,” McKinley says.

“The whole concept of how one enjoys a festival changes if you show up and everything is set up for you,” says Katrina Hennigar. She’s the manager of the Infamous Stringdusters, a progressive bluegrass band whose members host the Festy Experience in Virginia. This October, the Show Sherpa will return to that festival for the second consecutive year.

“Jay thinks about little things most people wouldn’t, and that makes everything so much easier and more enjoyable,” Hennigar says, noting as an example the bag of ice Morgan delivers to campers each morning. “It’s like having your own concierge.”

Hennigar adds that the sense of community built into the Sherpa concept mirrors the larger festival experience. “You meet cool people and have this great communal experience that you can just relax and enjoy,” she says.

And Morgan’s guiding knowledge goes beyond rain flies and camp stoves, Hennigar notes. “He has awesome taste in music,” she says. “So he always knows which bands are really on at any moment, because he’s probably seen them at three other festivals earlier in the season. That’s a whole other element of expertise you get with Jay.”

Morgan says he hopes to grow the Show Sherpa into a full-time gig one day — he currently works as the shipping manager at Music Store Live, an online guitar retailer based in Burlington. Perhaps as early as next summer, he adds, he’d like to be at festivals out west. And he’s looking into partnering with touring bands to set up travel packages for fans, which might allow the company to run year-round.

The Show Sherpa could become a long, strange and, quite possibly, lucrative trip. For now, Morgan is content to enjoy the ride.

“It’s definitely a cool way to be able to keep going to festivals,” he says. “Hopefully, that will always be a part of my life.”

The original print version of this article was headlined "Happy Camper."