Giving as good as it gets

Welcome to the holiday season — and to the Seven Days holiday guide to gifts. Every Wednesday through December 21, we’re offering ideas for just about everyone on your list. For greater variety, a different writer weighs in each week: same set of recipients, unique presents of mind. (Note: Some of these recipients may be figments of our imaginations.)

And what do we want this year? Just for you to shop local, please and thank you.

Mother: Lately, mom has been obsessed with baking — breads, pies, pastries, you name it — and we get to eat the results. Some of her endeavors are less successful than others, however. That’s why we’re upping her game with a class at King Arthur Flour’s Baking Education Center in Norwich. With a gift certificate, she can take her pick, but we’re hoping she’ll go for “Lofty Layers: Crafting Croissants.” Prices vary; this one is $90.

Father: Dad has become an avid biker, even commuting to and from work in all kinds of weather. We’re proud of his eco ethic, but worried that he doesn’t glow in the dark as much as he should, especially from behind. To make him more visible on the road, we’re getting him a flashy — literally — rear light called Flea 2.0. Made by Blackburn, it’s got a rechargeable USB cable that he can plug right into his computer. Nifty. $32.

Teen Sis: The aspiring DIY fashionista has been known to cut up her family’s clothing when it hasn’t been worn in a while. To steer her gently in another direction, we suggested she hit the thrift shops and practice on secondhand duds. Meanwhile, for inspiration, we’re giving her an upcycled hoodie by local “seam-chantress” Made Marion. $110. Photo courtesy of Shawna Desrosiers/Revolution. Jedi Hoodie dress by Made Marion, modeled by Frances McManus.

Kid Brother: It used to be all Legos, all the time, but little dude is expanding his horizons with other cool stuff to build. We’re betting Laser Pegs, which lights up when you assemble the parts correctly, will be a hit. He can create more than nine models from the 31-piece set called Dune Buggy. If he likes it, we’re putting him in charge of the Christmas lights from now on. $24.99.

Grandparent(s): Grandma is crazy for jigsaw puzzles. Pretty much the only thing she loves more is her grandchildren. And so we’ve found the perfect present: a 130-piece jigsaw puzzle that, when completed, is a picture of the grandkids! All we have to do is send in the photo, and the puzzle will be done in three or four days (allow more time closer to Christmas/Chanukah). $24.99.

Best Friend/Significant Other: One of our besties is wild for faux animaux. She’s already got the basics covered: jacket, boots, purse, PJs. But we’re quite sure she’s never seen anything like the purple — purple! — cosmetics case of indeterminate animal pattern with handy interior compartments by Stephanie Johnson. Even the TSA will be impressed to see this in her suitcase. $24. 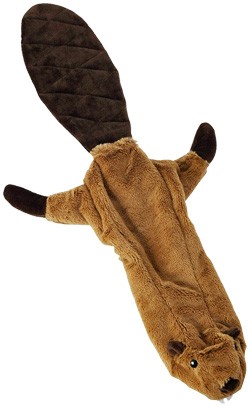 Pet: You’d think a pooch would mellow out after a few years, but ours still chews the crap out of his toys — ones with stuffing last about 10 minutes. So it was love at first sight with Skinneeez, the “stuffing-free toy for long-lasting play.” These are cuddly plush critters that come as a fox, bunny, bird, rodent — but what does it matter to Fido? There’s a Big Bite model into which you can insert an empty plastic bottle for that satisfying crunchy sound. Oh, and all models have squeakers in the tail and head. $7.99 regular; $8.99 Big Bite.