The Shelburne Museum Is Hooked on Patty Yoder's Rugs 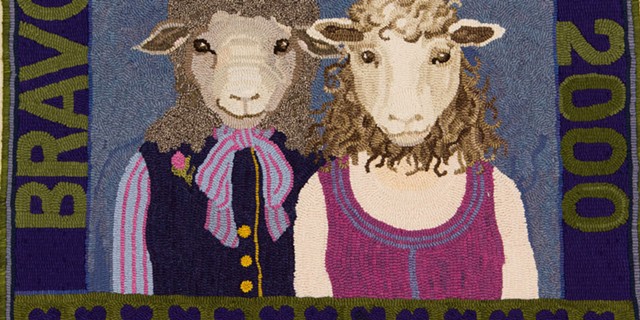 In the world of rug hooking, Patty Yoder is legendary. The medium, which consists of looping lengths of dyed wool through a base textile, is frequently associated with early American folk art and the so-called "thrifty arts." Yoder, who died in 2005, was a leader in working to reinvigorate the discipline, and her contributions are currently on view at the Shelburne Museum in the retrospective survey "Hooked on Patty Yoder."

"She's revered with rug hookers all over the country, not just in Vermont," said friend and fellow rug hooker Anne-Marie Littenberg of Burlington. "And it's a very small circle."

Yoder is most readily associated with her "Alphabet of Sheep." This series of 26 often-whimsical hooked rugs commemorates the flock that she and her husband, Ramsey, kept in Dorset. Many rugs also honor significant people in her life. "C Is for Clinton, a Man Who Loves His Dog," for example, features Yoder's youngest son as a gentle-faced ram.

In 2003, the "Alphabet of Sheep" became a book of the same name showcasing the rugs and accompanying stories. No longer in print, it is now highly sought after, with copies hawked for hundreds of dollars on e-retail sites.

The "Alphabet" forms the core of the show in Shelburne; the artist's family gifted the entire body of work to the institution following Yoder's death. In the gallery, visitors can start with "A Is for Anthony, as in Susan B" — an Americana-inspired work featuring sheep Anthony as Lady Liberty — and finish with "Y Is for Yoder, Lydia's Family Name." This latter work, a richly detailed close-up of sheep Lydia, was inspired by Yoder's encounter with an early photorealist self-portrait by the artist Chuck Close.

"When I went to [Yoder's] farm and was out in the pasture," Littenberg remembered, "I could identify [which sheep] she had done portraits of because she had so perfectly captured them."

The Shelburne Museum website explains that Yoder saw hooked rugs as "paintings with wool to be hung and enjoyed as art." Though she did not begin hooking until 1992, Yoder brought to the craft her experience from college studies in fine art and art history.

Indeed, historical references are scattered throughout the "Alphabet," such as a Grandma Moses-esque farmscape in "B Is for Brad and Brett." Exhibition text explains, in Yoder's own words, that Giuseppe Arcimboldo's oil painting "Summer" inspired "V Is for Victor, a Natural Vegetarian." The breathtaking array of colors in this work attests to Yoder's skills in dyeing her own wool, fine-tuning hues to her liking. She documented her experiments in notebooks, one of which is on view in the gallery.

While hooked rugs depicting sheep may seem benign on the scale of artistic provocation, Yoder did allow politics to enter her work at least once. Her 2000 work "H Is for Hannah & Sarah, a Civil Union" commemorates the ceremony of two friends following Vermont's legalization of civil unions. Exhibition text explains, "I hooked this rug with great pride in the state of Vermont and with great hope for the future of the United States of America." (Yoder didn't live to see marriage for same-sex couples legalized in Vermont in 2009, or throughout the U.S. in 2015.)

In addition to being a master of her craft, Yoder was beloved as a leader and a mentor to fellow rug hookers. Littenberg, who is also a photographer, met her in about 2000, during Yoder's tenure as president of the Green Mountain Rug Hooking Guild. The group met for monthly hooking and critique sessions.

Littenberg particularly recalled an interaction with Yoder while Littenberg worked on a rug to give as a wedding gift. When she presented the rug to Yoder for critique, Littenberg said, "She paused, and she said, 'I think this is the ugliest rug I've ever seen. I think that you should throw it away and make sure nobody ever associates this rug with your name.'"

"That advice was liberating to me," said Littenberg, who went on to publish the instructional books Hooked Rug Landscapes (2009) and Hooked Rug Portraits (2011). "[Yoder] was a really important mentor — she really inspired people to be original, to be rigorous and to bring [rug hooking] beyond the realm of crafty cute stuff."

"Hooked on Patty Yoder," on view through January 21 in the Pizzagalli Center for Art and Education at Shelburne Museum. shelburnemuseum.org