The Secret Weapon of Absurdist Parable 'The Lighthouse' Is Its Humor 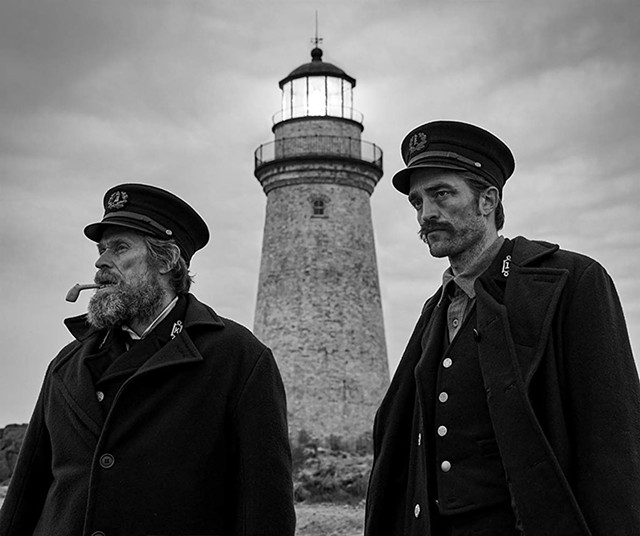 In 2016, I sang the praises of Sully Seagull, the real star of the shark-attack movie The Shallows. But that squawky avian actor looks like a hack beside the one-eyed gull who menaces Ephraim Winslow (Robert Pattinson) in the genially bizarre indie film The Lighthouse.

Ephraim is doing a stint as an assistant "wickie" (lighthouse keeper) on a rocky island off New England, and the solitude is getting to him. "I saw ye sparring with the gull," observes his boss, Thomas Wake (Willem Dafoe), who sagely warns the younger man that killing sea birds is bad luck. This being a film directed and cowritten by Robert Eggers, the history geek/dark prankster behind The Witch, what do you think happens next?

Animal trainer Guillaume Grange told Jezebel that the gull that sparred with Pattinson (via green screen) was actually three gulls, and they are high-strung birds that "will not come cuddle." That also serves as a remarkably apt description of the only two human characters in the movie — unless you count those who flit through Ephraim's dreams and hallucinations.

Shot on black-and-white film in an aspect ratio rarely seen since the 1920s, The Lighthouse suggests a lost expressionist classic chronicling the degeneration of one man's fragile psyche under the onslaught of nature and human cruelty. The movie's big — and welcome — surprise is that it's funny, in a Samuel Beckett-writing-fart-jokes sort of way. While Pattinson gives a fully committed performance, he's the straight man to Dafoe, who goes way past camp in his portrayal of an irascible old sea dog. Ephraim eventually declares his boss "a goddamn parody," and he's not wrong, but it's a parody for the ages.

The Lighthouse doesn't have much of a plot beyond "Things are bad and getting worse." But the conflict between the principals keeps us engaged, aided by their florid dialogue. (Eggers and his cowriter brother, Max, used 19th-century Maine author Sarah Orne Jewett as a dialect model.) By banning Ephraim from the upper chamber where the magnificent Fresnel lens resides, Thomas hoards the one source of beauty in their world for himself. Is he just being a petty tyrant, or are more sinister forces at work?

Turning on a dime from murderous rage to tenderness and back, the two men's relationship evokes the father-son conflict in a Kafka story, or possibly even — if you want to go out on a limb — the rivalry of a boomer and a millennial in a modern office setting. While Ephraim derides Thomas as a Captain Ahab wannabe, Thomas gets his own back by replying with the 19th-century equivalent of "Cool story, bro" whenever his younger colleague tries to offer a soul-baring confession or a vital piece of backstory.

This breezy dismissal of precisely the information the audience wants to know is an effective running joke. As a psychological thriller, The Lighthouse doesn't offer much we haven't seen hundreds of times before. Unlike The Witch, it doesn't build up a sense of cosmic dread so much as a sense of cosmic WTF. But it does so with art and gusto.

Eggers seems to delight in shooting Pattinson's matinee-idol face in foreshortened ways that make him look monstrous; in this movie, nothing pretty stays pretty except the unattainable light. The result is an absurdist parable that may or may not be for our time or any particular time at all, its perspective summed up in the businesslike glare of that uncuddly gull. The lighthouse beacon works fine, but everybody stays in the dark.

The original print version of this article was headlined "The Lighthouse"