The Science of Cheating 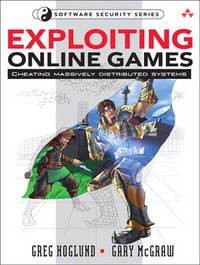 Gary McGraw’s interest in “World of WarCraft” is purely academic.

Players of the popular online game might seek heroic fame or the occasional hoard of treasure. McGraw just sees interesting ways to cheat by hacking the program.

“We count on software doing the right thing, and there are other people that are out there making it do the wrong thing for all sorts of bad reasons,” he says. Games offer a fun and fascinating view into the world of the Wild West of code slingers and software rustlers who are looking to make — and break — the rules.

In Exploiting Online Games: Cheating Massively Distributed Systems, McGraw and co-author Greg Hoglund shovel technical dirt on hacking computer games. The new world of sticking it to the gamemakers encompasses everything from creating bots that mindlessly work at killing monsters and collecting gold from sleeping players to making malevolent software alterations that let players get ahead in games ranging from “Counter-Strike” to “Second Life.”

Filled with technical details and real-world examples, the book provides a fascinating look into a world of gaming where your skills with a code compiler matter more than your reflexes with a joystick.

“A game has to give lots of information to the video card about how to render the world,” McGraw says, describing a classic hack to get ahead in a first-person shooter. “In order to make the gaming seem seamless to the player, only a little bit of what the video card knows about the world is shown to the player. But the problem is that it’s on the player’s PC, so if the player is a hacker, the player can say: ‘Hey, video card, tell me everything you know. By the way, make the walls transparent. And show me a new view, and give a little dot where all the bad guys are. Or better yet, make my bullet appear IN the bad guy.’”

Simple poor sportsmanship has now given way to a new form of cyber-cheating whose perpetrators take ill-gotten gains from a game and turn them into real dollars on Internet exchanges. When people cheat to earn in-game property, the disputes quickly move from the gaming console to the courts.

According to McGraw: “It turns out there are no laws against cheating! There are all sorts of laws against hacking servers and blackmail and all the other things that people have done traditionally in computer security. But there are really not any laws about cheating in games.”

While researching games didn’t turn McGraw into a gamer, it did increase his respect for the complexities behind what most think of as a simple pastime. “I think the most interesting thing about this book — intellectually from my perspective as a scientist — is these kinds of problems, with trust boundaries and state and time and massively distributed systems, are a harbinger of software problems to come.”

Anyone with a general interest in the insides of networked games will enjoy flipping through the book. Coders building online games, on the other hand, need a reference copy on their desk.

Gaming Hacks: 100 Industrial-Strength Tips & Tools by Simon Carless dishes out a smorgasbord of tips and tricks sure to keep the gadget-oriented gamer busy for months. Want to connect old Atari paddles to your PC? Use your Dreamcast on the Internet? This book tells you how.

The authors have gone out of their way to make this book readable. You don't have to know your C++ from C# to enjoy most of the content in the book.