The Round Goby, a New Threat to Lake Champlain, Reignites Debate Over Canal 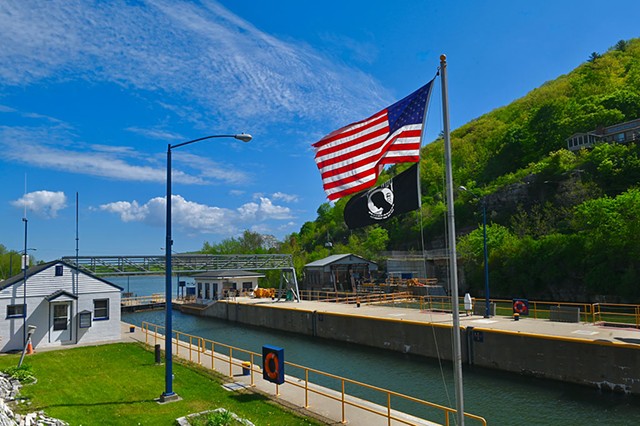 There's an aquatic army at the gates of Lake Champlain — a battalion of bottom dwellers born to conquer. The round goby, an insatiable, hardy fish that reproduces prolifically, has already colonized the Great Lakes in its advance across the country, reshaping whichever freshwater ecosystems lie in its path.

Recently, several gobies turned up in New York's Hudson River near the entrance to the Champlain Canal, which connects the Hudson with Vermont's shores. The canal has offered passage to many of the invasive species that already plague Lake Champlain. The goby may soon be next. The seasonal canal, closed since October, reopens this week.

"If the lock opens this season, the round goby will be in Lake Champlain." Lauren Oates tweet this

New York officials say they are working on a plan to keep the goby out of the lake and intend to release details soon. But anything short of indefinite closure won't be enough to keep the invaders at bay, environmental advocates say.

"If the lock opens this season, the round goby will be in Lake Champlain," said Lauren Oates, director of policy and government relations for the Vermont chapter of the Nature Conservancy, one of the nation's largest environmental groups. "There is no question about that."

Should that happen, the results could be far-reaching. Round gobies eat the eggs of native fish and can outcompete them for food. They also spread deadly diseases up the food chain that have been tied to major fish and bird die-offs. And they can reproduce every 20 days during summer months, making them virtually impossible to eradicate. Vermont's biggest lake could be quickly overrun.

Unlike some invasive fish species — looking at you, Asian carp — round gobies are unlikely to offend on appearances alone. They usually grow between just three and six inches long, with a cylindrical body and a pair of big, bulging eyes often described as "frog-like." They hatch slate gray but develop black spots as they age and can easily be mistaken for other mottled freshwater fish, such as the sculpin.

Native to the Black and Caspian seas in Eurasia, gobies migrated to North America in 1990 in the ballast of seafaring ships. By the turn of the century, they occupied each of the Great Lakes, where they now number in the millions. They have spread to many other waterways from there, usually in the hulls of boats or the bait buckets of anglers.

Last summer, four gobies were captured in the Hudson River, setting off alarm bells around Lake Champlain. Recent water sampling hasn't detected them in the Champlain Canal, but environmentalists say it's only a matter of time.

The Champlain Canal stretches 60 miles from Waterford, N.Y., to the southern tip of Lake Champlain in Whitehall, N.Y. It is operated by the New York State Canal Corporation, one of dozens of quasi-public corporations that run parts of the state's infrastructure. New York's governor appoints a director to oversee a staff of more than 400 people.

The partially man-made canal, built nearly 200 years ago, consists of 11 independently operated locks. It was once an important trade route but now caters almost exclusively to local pleasure boaters and adventure tourists circling the Great Loop, a nearly 6,000-mile journey through connected waterways around the eastern half of the U.S.

The canal corporation does not track exactly how many boats use the waterway to enter Lake Champlain annually, but the available numbers suggest it's only several hundred, at most. Officials say traffic fell during the pandemic because of border closures and will likely rebound this season.

While New York would need to close only one of the canal's locks to prevent the goby — and other invasive species — from using it to reach Lake Champlain, doing so would also blockade boats.

Supporters of the closure say it would only be temporary. The U.S. Army Corps of Engineers has spent the last several years exploring ways for boats to move through the locks without allowing in uninvited critters. The corps is expected to report its findings in the coming weeks.

"We're simply asking for time for them to get it done," Oates, of the Nature Conservancy, said.

But even a temporary lock closure could hurt the rural region's tourist economy. "It's not a lot of money, but it's enough, especially for the marina industry," said Mike O'Brien, president of the Vermont Boat & Marine Association.

Many canal users also visit the New York towns and villages along its span, and some are drawn to the engineering relic itself, said Bob Radliff, executive director of the Erie Canal National Heritage Corridor.

People also want to visit a healthy lake, though — especially anglers, whose sport would be affected by the goby. Voracious round gobies can be frustrating bait stealers. They also gorge on the eggs of important sport fish, including lake trout, which are finally thriving in Lake Champlain after decades of conservation efforts.

Fears of a fouled fishery drove members of the governing board in Essex County, N.Y., to endorse a resolution earlier this year in favor of keeping the lock closed for the summer.

Neither Radliff nor O'Brien would say whether they would support the move, even if it were truly the only way to keep the goby out of Lake Champlain this summer. Radliff said he was concerned about the precedent it would set, noting that there have been calls to close other parts of New York's vast canal system. O'Brien said he would need to know more about the ramifications of a goby-infested lake.

"We've had invasive species in the past, and we've never closed the lock," the marine group president said.

The goby certainly wouldn't be the first pest to infiltrate Lake Champlain through the canal. Researchers believe that almost half of the roughly 50 invasive species now present in the lake got there through the New York waterways, with many coming through the Champlain Canal.

Timothy Mihuc, director of the Lake Champlain Research Institute, was one of the researchers who first discovered the spiny water flea in the Champlain Canal a decade ago. The goby, he said, is simply the "most recent poster child" of how the canal serves as a conduit to invasive species.

Vermont officials, led by U.S. Sen. Patrick Leahy (D-Vt.), pushed for a lock closure in 2012 to prevent the spiny water flea from invading the lake. The New York State Canal Corporation refused, citing the potential economic impacts. The water flea eventually made its way into the lake, though it is not clear whether the canal played a role.

Leahy, who helped secure federal funding for the ongoing Army Corps of Engineers study, continues to support a lock closure. He and U.S. Rep. Peter Welch (D-Vt.) told Seven Days in a joint statement last week that the canal corporation must take immediate steps to keep the goby out of the lake, even if that means restricting boat traffic until a permanent barrier can be installed.

Officials in Gov. Phil Scott's administration aren't willing to go that far. Citing the recent news that the goby has not moved any closer to the canal, Vermont Natural Resources Secretary Julie Moore said her agency was not asking New York to keep the lock closed at this time. She would not say at what point her agency might support such a move.

"Our position will continue to be reconsidered and modified as needed," she said.

Moore's counterparts in New York have no control over the waterway and say they are working with the New York State Canal Corporation on mitigation measures. The canal agency, meanwhile, has not indicated whether it would even consider closing a lock this season. A spokesperson responded to an interview request by referring Seven Days to a press release the agency put out with the state's Department of Environmental Conservation in March about steps it was taking to keep the goby out of the canal.

The release listed a few immediate mitigation measures, such as a new "double draining" protocol aimed at better flushing out locks before boats pass through. And it promised a "rapid response" plan that the canal agency says will determine what happens if the goby was found in the canal.

Solutions have been batted around for years, Mihuc said, but every time a new pest comes along, the same debate resurfaces.

"We've had a lot of discussion," he said. "It's time to actually do something."