The Riot Group Returns With a Uniquely American Political Play 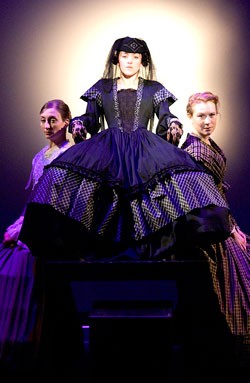 When Adriano Shaplin writes a new play, it’s a safe bet to expect the unexpected. The Burlington-born and -bred founder of the edgy Riot Group theater troupe tackles unusual aspects of thorny contemporary situations. For example, Hearts of Man (2009) focuses on an accused pedophile snared in an Internet sting as it ponders how the judicial system protects or creates victims. Other recent topics include a wartime attempt to assassinate a Middle Eastern dictator and cutthroat media competition to cover 9/11.

Shaplin describes his new work, Freedom Club, as “a savage comedy about the delirium and danger in American extremism.” For audiences accustomed to the playwright’s modern settings and minimalist visual aesthetic, the script takes “unexpected” to surprising new places. The first act features elaborate 19th-century costumes and appearances by Abraham Lincoln and John Wilkes Booth. The second half happens in the future: Tea Partying Virginia, 2015.

This weekend and next, the Old North End’s new Off Center for the Dramatic Arts — cofounded by Riot Group member Paul Schnabel — hosts six workshop performances before the show’s official world premiere next month in Philadelphia.

In a phone interview from his New Jersey home, Shaplin details the project’s genesis. Freedom Club’s fresh look and ambitious scope result from an 18-month collaboration between the Riot Group and another avant-garde ensemble, Philly’s New Paradise Laboratories.

“It seemed like the companies were mirror realms of each other,” Shaplin explains. Riot Group is “a very language-based company. We experiment a lot with text, and with different types of storytelling.” New Paradise has “a very rich physical and visual style … Some of their shows have no text at all. So the idea was to bring the two things together and see how we could blend our styles to make a kind of total theater.”

For Freedom Club, the cast and crew come in equal parts from both companies. Since NPL’s Whit MacLaughlin directs, Shaplin wrote a role for himself — the first time he has done so in seven years. “I really wanted to reconnect the experience of writing a show and also being in it,” he explains. “It’s this weird part of my process that seems to yield interesting results. I understand my work better from inside.”

Shaplin became intrigued by the pairing of Lincoln and Barack Obama as he watched the 2008 presidential election unfold from England, where he was wrapping up a two-year residency at the Royal Shakespeare Company. “Part of the inspiration for this play was [to] figure out if there was any connection there,” Shaplin recalls.

He discovered fascinating parallels. “If you look at a figure like Barack Obama, there can be these extraordinarily different narratives about a single individual,” he says. “There can be people telling wildly divergent stories about who the president is and what he stands for. And this is true about Lincoln as well … He was the most unpopular president in American history up to that point. He was reviled by many people.”

A surprising link Shaplin found: “One of the slanders that was common to use against Abraham Lincoln was that he was a half-breed, or that he was half black,” he says. “People who hated him called him ‘King Abrahamus Africanus the First.’ Abraham Lincoln was actually called by his political enemies, satirically, the first black president.” Among these enemies was the Know-Nothing Party, “an almost identical cultural phenomenon to the Tea Party,” he notes. Lincoln assassin John Wilkes Booth was a member.

“When I do historical research, I gravitate toward the moments that don’t make sense … the unresolvable contradictions,” Shaplin says. He believes a playwright’s task is to raise questions, not answer them. The tumultuous time of Lincoln provided plenty for Freedom Club. “Why was the right to vote given to former slaves but withheld from white women?” he wonders. And “what is the place of rebellion in our political culture” throughout history? The script explores the ongoing tension between individual freedom and membership in what Shaplin calls “the American club.”

One club Shaplin has belonged to since childhood is the Queen City’s theater scene. Although almost every Riot Group show “has made it to Burlington at some point,” bringing Freedom Club to town for its final tuneup marks “the first time we’re showing something here first,” he says. “It’s a sophisticated piece. We know the Burlington audiences are responsive, honest, sophisticated … Every performance is an opportunity for us to take the temperature of the audience,” he notes. “We’ll be soliciting feedback every night.

“We’re also really excited about the opening of the Off Center,” Shaplin continues. “When I was involved in Burlington theater, I was part of that dream of having spaces that could host and accommodate all the talent … Spaces unlock what can go on.”

Freedom Club, presented by the Riot Group and Philadelphia’s New Paradise Laboratories, Off Center for the Dramatic Arts, Burlington. August 12-14 and 18-20 at 8 p.m. $10 suggested donation.