The Right Stuffing: Two lady taxidermists share an inside view of the animal world 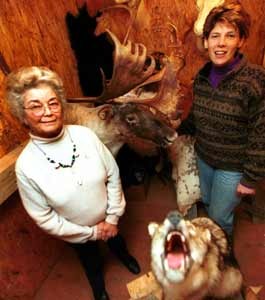 Like many Vermonters, Joyce Wark and Teresa Smith consider hunting sacrosanct. From families that deemed the sport an honorable tradition, they were each nurtured by mothers who thought nothing of trekking through the woods with a gun every autumn in pursuit of deer or other game. In fact, Wark and Smith are among the state’s 6600 licensed female hunters — a significant figure, though still vastly outnumbered by the 83,593 Vermont men who engage in the activity.

What sets these two women apart, however, is the fact that they are both also taxidermists. Smith, 36, has a thriving West Topsham cottage industry called Strut Your Stuff. She learned everything she knows about “wildlife art,” as the women often refer to it, from the 68-year-old Wark, who lives about 25 miles away in Bradford.

“We met when I took Joyce’s ‘Becoming an Outdoors Woman’ course three years ago,” Smith recalls over tea in her cozy kitchen, adjacent to a living room decorated with examples of her handiwork — two black bears, a deer and a boar. “We just connected. It was great to find someone with the same interests.”

In fact, the bond between Smith and Wark is older than either one of them realized. Smith’s grandmother was born in the old farmhouse Wark currently occupies.

“I knew her mom,” Wark continues. “My father and her grandfather were friends who hunted together.”

“We seem to mirror each other,” Wark says of a relationship that’s gone from mentoring to sisterhood.

“It’s hard to find someone who’ll just jump into a Jeep and go looking for animals,” explains Smith, a part-time dental assistant.

“Even road kill,” adds the white-haired Wark who is just as spunky as her pal.

Roughing it is one thing. Reproducing lifelike, three-dimensional representations of animals for permanent display — the definition of taxidermy, in a nutshell — is quite another.

Before she discovered the joys of “fixing skin,” which is how the Greek root of “taxidermy” translates, Wark was a housewife who once dreamed of becoming a surgeon. She painted landscapes and animals as a hobby. One day in the early 1980s, her interests in anatomy and aesthetics suddenly merged.

“It came to me in a flash, out of nowhere,” Wark says. “I decided to learn taxidermy, but found I had to teach myself. No taxidermist would help me. They didn’t want competition. But I’m one of those people who figure, ‘If it’s been done, there’s a book out on it somewhere.’”

Indeed there was, and Wark mastered the mechanics: Take measurements, remove and “flesh” the hide, apply non-iodized salt and dry the skin before sending it out to be professionally tanned — a treatment that takes from six months to a year because “so many are lined up,” she explains.

When the hide is returned, the taxidermist soaks it over-night, inserting plastic liners to hold the shape of the ears and pins to keep the artificial nose and mouth in place. The hides are fitted to prefabricated forms, or manikins, which can be ordered in the specific sizes of the animals. The noses and mouths come with them, as do wire and bolts to stabilize the legs. The ear liners and glass eyes are purchased separately.

Hides take about two weeks to dry and constrict on the form, which is affixed to “a natural-looking setting,” Wark says. “Most people like animals mounted pretty much the way they were while still alive. You might add a little life by opening the mouth a bit.”

Taxidermy is an age-old practice. Some say it began when a 16th-century Dutch nobleman discovered that his tropical birds had died from fumes in their heated aviary. Unwilling to merely dispose of the gorgeous carcasses, he was advised by a chemist to skin them, fill the cavity with spices and use wire to attach the finished specimens to a perch.

Fast forward to the 1800s, when upholsterers stitched together their customers’ trophy animals after stuffing them with rags.

Wark’s exploration of taxidermy coincided with her new-found attraction to Native American religious beliefs. Although raised a Catholic in Barre, she now follows a more ancient spiritual path. “I believe everything you do must honor the Great Spirit. Whenever I begin taxidermy, I say a prayer and suddenly I know there’s something beyond myself. It’s about the sacredness of connecting with nature. You actually pick up the essence. You try to bring life back to that animal.”

After 17 years of working at her craft, Wark’s fibromyalgia — an arthritic condition — was making the physical demands of taxidermy too difficult. “I started to design coats from beaver, raccoon and coyote,” she says. “I bought furs from trappers and sold my work in Vermont, Canada, Alaska. I made mukluks out of moose hides — they’re called Eskimo boots. And I taught taxidermy every winter. I only teach people who have a spiritual outlook about it.”

When Teresa Smith became her student in 1999, the Native American concept took hold for the younger woman as well. “The biggest spark for me is honoring the animal by using the whole body,” she says.

The two also share a few taxidermy rituals that tap into Indian lore. “We both have powwow drums that we ordered from Taos, New Mexico,” says Wark, who hosts drumming cirlces in the teepee she puts up each summer in her back yard.

“Joyce had a process I really liked, so I do a prayer and drumming with each animal,” says Smith, whose drum is covered with a bearskin and rests on a wooden stand adorned with turkey feathers and tufts of white rabbit fur.

Smith’s pre-taxidermy ritual always includes a prayer “that I’d have the energy in my hands to do the animal justice.”

She takes a similar approach to hunting. “I’m part of a tradition of hunters who care. I think you’ll find that most hunters are that way, really.”

Although some people might see a contradiction between revering animals and killing them, Smith makes a distinction between those who hunt ethically and those who “ride around with a deer on the hood of their car. That’s not what it’s about. We’d never sacrifice our meat to show off an animal.”

While she cannot attest to the ethics of hunters who bring a carcass to her for mounting, Smith is careful about her own practices. “It’s about respecting the land, the owners of the land, the animals, the firearms and the other hunters. It’s about not taking shots you shouldn’t. You’re not just out there to get the animal; you’re respecting nature.”

Smith’s reasons for turning to taxidermy were artistic — she had previous experience as a floral designer — and personal. “It came along at a time in my life when I needed it,” she says. “My two kids were old enough to have their own interests. I needed something creative and focused. There had been a lot of deaths in my family — my father, my grandparents.”

She says hunting with her husband, David, has created a stronger bond between them. He’s also supportive of Smith’s taxidermy vocation. Her two teen-aged children are not particularly interested in either hunting or taxidermy, however. “They’re, like, ‘whatever,’” Smith suggests.

Asked about her mother’s passion for “fixing skin,” 14-year-old Amanda — whose dark hair is a combination of ponytails and dreadlocks — seems ambivalent. She’s seated next to a small, lifelike bear that occupies a position on the living room couch. “I don’t know,” she says, clicking the remote to switch between MTV and Animal Planet. “I don’t care for it too much, I guess.”

Two of Wark’s four grown children have learned taxidermy, however: a son, who lives in Bradford, and a daughter in Alaska.

When a hunter brings in his prey, it can cost between $100 and $2000 or more to mount an animal, depending on the size and complexity of the project. Smith is happy that business has been good lately — she has 25 to 30 customers a year — yet her motives are not pecuniary. “I’m not doing this because I want to make money. I have stronger purposes. There are times I’ve stood there and cried when starting an animal,” she remembers.

“I get attached to them,” Smith acknowledges.

“I had a 280-pound bear in my shop for two and a half months before shipping it to Poland,” Smith recalls, referring to a taxidermy specimen from a New York City man who wanted to display it in his Eastern European hunting lodge. “Whenever I tripped over it, I’d say, ‘Sorry.’”

Handling large bears is just one example of the rigors associated with taxidermy. “Some people get carpal tunnel syndrome,” Smith points out while surveying the pheasant, partridge, coyote and caribou she’s finishing in her workshop above the garage. “There’s a lot of sewing, heavy lifting. But my mother was a carpenter with my dad. I think you can do anything you want to do in life. This is hard work, but there’s an adrenaline rush. The artistic side carries you through, the challenge of taking it apart and putting it back together.”

Despite their devotion to taxidermy, both women draw the line at certain critters. “You want to remember a pet alive,” Wark insists.

“Someone once asked me if I’d mount a cat,” Smith says disdainfully, as her family feline, Camille, looks on with what might be interpreted as alarm. “Another person asked about a rooster. Well, I’m not going to kill a rooster just to make a decoration.”

“Those are domestic animals,” notes Wark, who also feeds a dozen wild deer that regularly show up in her backyard. “It’s only fair to give back to them.”