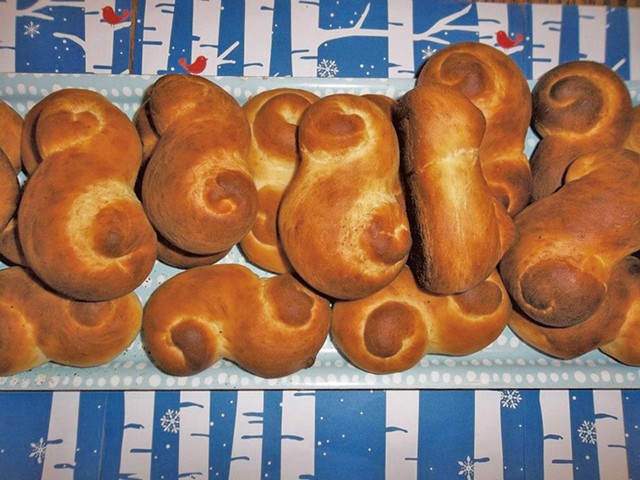 Winter in Vermont means lots of darkness. In December, when the sun sets just after 4 p.m., it's hard to believe we'll ever return to bright summer days. Yet our descent into blackness is nothing compared to Sweden's.

I spent my junior year of high school there, living with my father's cousin and his family. In the middle of winter, even in the central part of the country, the sun peeks above the horizon at 10 a.m. and descends again at 2 p.m. Daylight hours are usually overcast, gray and hazy. When the sun did make a rare appearance, teachers sometimes stopped their lessons and allowed everyone to sit by the window and soak up some precious vitamin D.

It's no surprise, then, that the Swedes mark the gradual return of light with a celebration called St. Lucia's Day, on December 13. It originated as a pagan festival and, when Christianity came to Sweden, became associated with St. Lucia, a girl who is said to have secretly brought food to hiding Christians in the catacombs of Rome. She wore a crown of candles on her head so that she could find her way in the dark.

Today, St. Lucia's Day is celebrated in Sweden through songs and processions, where girls and boys carry candles, and one special girl — the Lucia — wears a crown of candles and greenery.

I was lucky enough to be part of this celebration and learned many Swedish Christmas songs in preparation. We sang for four days, bringing a parade of light to local businesses, schools and nursing homes.

Along with music, we brought lovely St. Lucia rolls. This sweet bread is also called lussekatter, or Lucia's cats. If you use your imagination, you can see the shape of a curled-up feline in each roll.

The most essential and unique ingredient in this recipe is saffron — thin, red-golden threads harvested from the saffron crocus. It lends an earthy, slightly pungent, almost perfume-y quality to the bread. Yes, saffron is the most expensive spice in the world, and I've seen recipes that add just a touch of yellow food coloring to mimic its color. But, in my opinion, you can't properly make these rolls without it. Luckily a little saffron goes a long way, and you can find affordable options at the grocery store.

I use a bread machine to make my dough, but the method I describe below does not require one. Some people stud these rolls with raisins and top them with frosting or chunky pearl sugar. My family likes them best unadorned.

They bring a little light to these dark days. 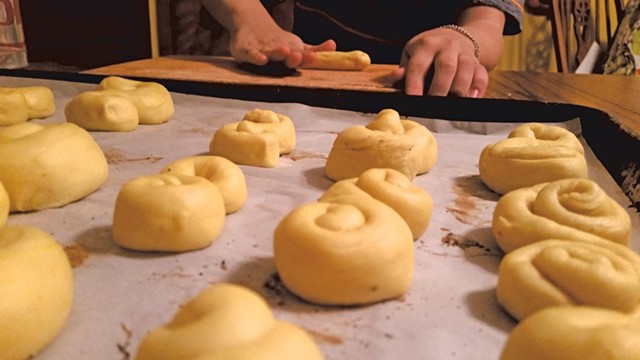