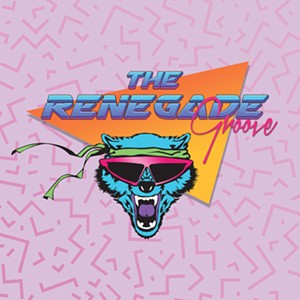 The Renegade Groove are a Burlington-based funk quartet, but their self-titled debut makes the band sound much bigger. They spent most of 2017 working on this LP, and it shows. Packed with guest musicians and undeniably danceable cuts, the album sounds like an actual party.

This is a group with deep local roots. Evan Crandell, who handles synth bass and alto sax, used to have a crew named Evan Crandell & the Too Hot to Handle. It was a launching pad for quite a few young musicians — including keyboardist Danny Whitney and drummer Andy Gagnon, both of whom have reunited with Crandell here. Rounding out the team on guitar and vocals is Collin Craig, who's been tearing up blues open mics for years now. Along with Whitney and Gagnon, Craig is one of the Renegade Groove's three vocalists, all of whom stand tall in front of the mic.

Album opener "Wanna See You Dance" lays out the quartet's manifesto: This is a party band with a sense of humor and serious chops. In particular, Whitney has a broad range, but for most of this album he's channeling P-Funk keyboard wizard Bernie Worrell in high fidelity. Though everyone in the Renegade Groove can really cook, Whitney's nimble fingers shape this album's sound from front to back.

The album continues in the same vein as the opener — that is, upbeat tracks with dance-y names such as "Rock Your Body Right," "Everybody Get Down" and "Gettin' Freaky With It." In lesser hands, this kind of repetition would equate to a kind of Soul Train death march. What saves the Renegade Groove from that fate is the same secret weapon that catapulted many of their idols to fame: damn great arrangements.

While they devote a lot of time to up-tempo funk workouts, the Renegade Groove really shine in slower moments. "Under My Skin" is a slow-burn R&B ballad that sounds like it was written post-Purple Rain and pre-new jack swing. That's a real sweet spot, and the track is a revelation, showing off the band's chops in a whole new light.

The showstopper, though, is album closer "LOVE (The Meaning of)," featuring lead vocals from Hannah Pitkin. She contributes backup vocals throughout the record, but when she steps out front here, the band becomes a very different animal. Very few local funk outfits have such broad horizons.

Overall, the LP is a hot mess of blurred genres and catchy hooks — in other words, the Renegade Groove absolutely nailed the vibe of the '80s albums to which they pay tribute. This debut captures their live energy, but it's also a portrait of a young band with tremendous potential. What's next for the Renegade Groove? Anything they want.

The Renegade Groove play an album-release party on Saturday, May 5, at Nectar's in Burlington. Northeast Traffic open. The band's self-titled debut will be available at therenegadegroove.bandcamp.com.

Correction, May 2, 2018: An earlier version of this story misidentified the title of the first song on the Renegade Groove. It is called "Wanna See You Dance."

Speaking of The Renegade Groove