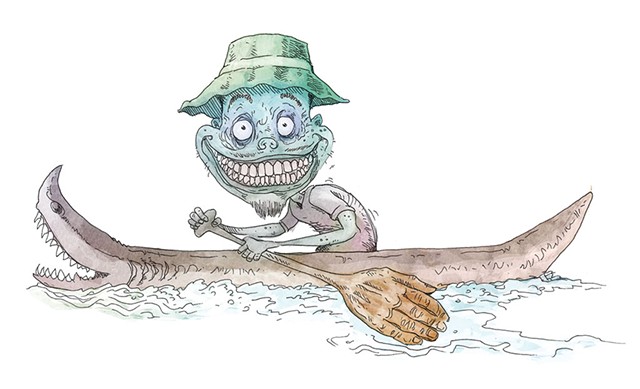 September's here, so it's time for incoming students to choose college courses. But some class names can be confusing, and the explanations in online catalogs are often vague or hard to follow.

Rather than waste time looking things up, peruse these descriptions of what some actual, though oddly named, courses at Vermont colleges are really about — probably, maybe.

All the essentials of disrespectful dating behavior: ghosting, bang and bounce, and describing exploits on social media. You will leave this course as an expert cad, lout, blackguard, bounder, rake and stinker. While these skills have traditionally been coded as masculine, the professor is engaged in cutting-edge research on feminine caddishness. Students are strongly advised not to date anyone they meet in class.

Sure, you should raise your children to be polite, considerate and kind — if you want them to languish in mediocrity for their entire lives (and not have enough money to take care of you when you're old). But what if you prefer to raise a dominating force that wins at any cost? Starting with Niccolò Machiavelli's The Prince, this course examines the suppressed but brutally effective techniques that can help you raise your own little Bill Gates, Leona Helmsley, Mark Zuckerberg or Jeff Bezos.

Don't overthink it. Despite the aggressive title — who puts "fuck yourself" in a class name, even as an acronym? — this is the mellowest course in the Brave Little State. Attendance counts for 100 percent of your grade. Everyone just does stuff on their phone, including the teacher. It's not clear what happens if you go to class accidentally.

GERM 106 My Best Friend, the Dictionary

Saddest class title ever. Someone on the faculty should discretely adopt this professor as a buddy. Remember when you were 4 years old and kids on the playground would say, "Do you want to be my friend?" We can still do that.

A professor at this Catholic college had a brilliant idea: Work with what God gives you! And God gives Vermonters lots and lots of snow. At the start, students view snowflakes under a microscope while trying to keep them frozen. Good luck! In later weeks, they turn to making snow sculptures and then, of course, it's time for epic snowball fights and cocoa. Be sure to bring mittens to class. (Winter term only.)

Artistic expression through ice sculpture, messages in bottles and dumping vats of green dye into rivers on Saint Patrick's Day. One of the most practical and commercially viable fields of art.

Students head out on gentle lakes only, of course. You wouldn't want to be tripping in a whitewater raft or a tricky kayak, would you? Students bring their own coloring book.

You won't be playing Billy Joel songs, obviously, or even Elton John. It'll either be classical works (duh) or some less-gritty jazz guys, such as Oscar Peterson or Keith Jarrett.

This course explores all the ways in which time and space are different here in Vermont. Have you ever noticed that there is a time bubble folded through five dimensions wrapping around each one of us? By week four, you'll be able to see it.

Cannonballs, baptisms or synchronized swimming? You decide. Meets at the pool. Floaties optional.

A very interesting class about the little-known medieval warrior queen, now forgotten since Joan of Arc and Boudicca got so trendy. She's the distant ancestress of Bernie Sanders, Trey Anastasio, and Ben and Jerry.

Students go out on the quad and throw a Frisbee. Sounds awesome, right? Read the title again. Class starts at dawn.

In this course, students talk about reality TV shows. It's harder than it sounds, though. If you don't know one of the potential brides on "The Bachelor" or all of the "Real Housewives of Scranton," the other students can be pretty brutal.

An exploration of feeling comfortable in the gender to which you were assigned at birth. The class naturally divides into two sections, the pink and the blue. The pink section focuses on fashion, celebrity gossip and planning the décor for their future families' homes; the blue section goes outside to fight and fart and argue over pointless status hierarchies. (Note: This class may be phased out in coming years.)

Everyone has experienced devilment in their daily lives, but where does it come from? How can it be managed? Is Satan really the cause or just an outdated metaphor?

There are many kinds of Science Pilots, of course. Aerospace Science Pilots get all the glory because everyone loves astronauts, and both Elton John and David Bowie did romantic songs about them. But perhaps you should consider training to be an Environmental Science Pilot, the newest and most sensitive type of science pilot?

Who would have guessed that the most badass college class in Vermont would be at good-hearted, grinding Middlebury? Awesome! Live music by heavy metal band Pantera during class.

Frankly, I find it irresponsible to introduce impressionable college students to any cult, but if you simply must, it might as well be one based on world dance.

What? There's a class at Norwich University called "No Norwich Equivalent"? That's right, this mind-bending philosophy course digs deep into paradoxes. (The original title, "This Is Not a Class at Norwich University," seemed a bit too obvious.) At the first session, there are two instructors: One cannot tell the truth, and one cannot lie. Are they one and the same? Is individuality itself an illusion?

ECSP 202 D2:EI for Infants and Toddlers

Chess fans know that D2:E1 refers to the move in which your opponent takes your queen with a pawn after it marches all the way down your unprotected board and then you inexplicably fail to use either your queen or king just to capture that impudent peasant. Admittedly, it doesn't come up in games very often. But this is a class about teaching chess to infants and toddlers, and they're just not very savvy yet.

The original print version of this article was headlined "Get Smart"