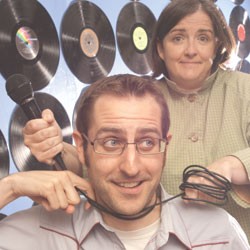 In his best-selling book The Tipping Point, Malcolm Gladwell examines the phenomenon of phenomena and attempts to uncover the mechanisms behind epidemic social trends. Gladwell argues that three rules govern when and how a fad becomes full-blown change or, in his words, reaches its “tipping point.”

Gladwell’s first rule is the Law of the Few, which states, “The success of any kind of social epidemic is heavily dependent on the involvement of people with a particular and rare set of social gifts.” He calls his second maxim the Stickiness Factor, a measure of how memorable messages or ideas are. The final rule is the Power of Context: “Epidemics are sensitive to the conditions and circumstances of the times and places in which they occur.”

Gladwell most likely never intended his theory to be applied to the development of a fledgling, and at times nonexistent, comedy scene in the rural Northeast. However, as the third annual Green Mountain Comedy Festival gets under way this week, featuring 30-plus local comics, all the writer’s criteria seem to fit. With more comics and, increasingly, more outlets in which to perform, standup in Vermont may have reached its tipping point.

The Law of the Few (Or, A Guy Walks Into a Bar)

Until recently, standup comedy in Vermont was an afterthought, a performing art generally banished to ignominy. Aside from the annual Higher Ground Comedy Battle — a fun, if inconsistent, showcase of local standup talent — and occasional performances by veteran comics such as Jason P. Lorber or Josie Leavitt and her band of fellow funny women, the Vermont Comedy Divas, there wasn’t much to laugh about in the Green Mountains. But that has changed, thanks in large part to Leavitt, who has taught a standup-comedy class in Burlington for the past six years, and to comedians Kathleen Kanz and Nathan Hartswick, the dedicated duo behind this year’s GMCF.

Gladwell’s theory calls for “the involvement of people with a specific and rare set of social gifts.” He could be describing Kanz and Hartswick, the de facto architects of Vermont’s rising comedy scene.

Kanz is a Boston native who lives in Montpelier, where she has booked a monthly comedy showcase at the Black Door Bar and Bistro since 2007. She founded the Green Mountain Comedy Festival in 2009.

“I had this idea of a massive lineup with folks doing five-minute sets,” she says of her original concept for the fest.

That first year, the term “festival” was charitable, as the showcase consisted of one show at the FlynnSpace in Burlington. In 2010, Kanz added a second night at the Monkey House in Winooski, where she currently hosts another monthly comedy show. This year, the GMCF offers an unprecedented six shows over five nights at venues around the state.

Kanz “wanted [Vermont] comedy to be bigger than it was, and she wants to celebrate comedy,” says Leavitt, who headlines a GMCF showcase at the Vergennes Opera House this Saturday. “She’s a really good promoter, and she runs a great show.”

Gladwell would call Kanz and Leavitt “mavens,” the type of people who accumulate knowledge and share it with others. But, for a true phenomenon to take shape, Gladwell says you need another type of personality in the mix, someone who can reach a wide array of people and unite them behind a common idea. He calls these people “connectors.”

Hartswick is a Vermont native, an alum of Leavitt’s class and the winner of the 2011 Higher Ground Comedy Battle. He is also a cofounder of the Vermont Comedy Club, a website devoted to cataloging local comics and promoting and unifying the scene’s previously disjointed pieces. He curated half of this year’s GMCF showcases.

“I really enjoy watching new comics get better,” Hartswick says. “And I love thinking about how to put together lineups that are fun and varied. It’s been fun to put those things together and watch them grow.”

In turn, says Leavitt, “It has been so much fun to watch Nathan blossom, not only as an artist but someone who has developed a deep love for comedy and creating opportunities — not just for themselves, but for other comics.”

The Stickiness Factor (Or, Take My Wife … Please)

On a national level, standup comedy has experienced something of a boom in recent years, reflected in the popularity of television shows such as “Last Comic Standing” and the crossover success of comedians such as Zach Galifianakis, Daniel Tosh and Demetri Martin. National pop-culture trends are typically slow to arrive in Vermont, but it’s no surprise that, once comedy emerged in the state, it had staying power. We all need a good laugh. And the nature of good comedy is to highlight our collective failings and foibles on a universally relatable level.

Colin Ryan was a finalist at this year’s Higher Ground Comedy Battle and started a popular monthly comedy open mic at Patra Café in downtown Burlington. The show regularly draws upward of 20 performers per night, usually including several comics who are making their debut. In less than a year, Ryan’s open mic has become ground zero for the local comedy scene. He credits Kanz and Hartswick with planting the seeds.

“A lot of us are just figuring out how to do comedy right now. We’re just trying to find our voice,” he admits. But Hartswick and Kanz, he says, “think about how to make this into something that will last.”

The Power of Context (Or, I Get No Respect)

So, why now? After years of comparatively little activity, how has the scene reached a point where it can support an ambitious festival like GMCF? Why has Vermont comedy, as Leavitt puts it, “exploded”?

It provides indispensable opportunities, for starters. As Hartswick notes, standup comedy is unique among performing arts in that, to become good at it, you have to do it in front of an audience.

“You can’t sit in your bedroom practicing and become a good comic,” he says. “You need an audience to interact with.”

More outlets to perform, such as Ryan’s open mic, Kanz’s monthly showcases and several other comedy nights around the state, give comedians more opportunities to hone their craft. In turn, these more polished comedians draw larger audiences, which necessitate the opening of more outlets. It’s a classic (rubber) chicken-or-the-egg situation.

“There are so many more people trying comedy for the first time,” says Ryan, who will perform at two GMCF showcases, one on Saturday at the Big Picture Theater & Café in Waitsfield and one on Sunday at the Cellar in Burlington. “And that’s all it takes,” he adds.

Well, that and lots of funny folks.

“It’s a critical mass of people,” says Leavitt. “And also, the comics in Vermont are pretty friggin’ good,” she opines. “That makes a huge difference. People just want to see comedy.”

In Their Own Words

With so many comedians performing at this year’s Green Mountain Comedy Festival, it may be hard for the average comedy fan to know where to begin. So we asked GMCF organizers Nathan Hartswick and Kathleen Kanz to dish on the headliners for each show and tell us what, exactly, is so funny. Here’s what they said.

Wednesday, May 25, at the Monkey House in Winooski

A professional wrestler of significant breadth, he is the scariest man in comedy. Sure, his explosions will pop your eardrums. Sure, he’ll frighten you into laughter, but your laugh will be genuine. And your hearing will return tomorrow.

Thursday, May 26, at the Monkey House in Winooski

Mike is a charming performer. When his 20 minutes are up, you’re sad to see him go. He makes sense of the nonsense. If only Mike were available to explain everything to us all the time.

Friday, May 27, at Ye Olde England Inne in Stowe

Consistently one of the funniest women in Vermont. She’s sharp and smart and loves to throw the audience curveballs. She talks a lot about parenting, but her material is far from innocent. And you’re happy to go there with her, because she’s so damn funny and likeable.

Saturday, May 28, at the Big Picture Theater & Café in Waitsfield

Her comedy will take you on a fast-paced and very personal ride. Quickly you’re comfortable with her because she’s open, vulnerable and honest. She’s not afraid for you to know who she is.

Saturday, May 28, at the Vergennes Opera House

The founding member of the Vermont Comedy Divas, Josie pulls a lot from her personal experience running a bookstore, trying — and failing — to be “handy,” learning Chinese and navigating the medical system. Her humor is full of the kind of relatable human drama that everyone can identify with and laugh at.

Sunday, May 29, at the Cellar in Burlington

The Green Mountain Comedy Festival runs Wednesday, May 25, through Sunday, May 29, at various locations around the state. Visit vermontcomedyclub.com/gmcfschedule for complete details.