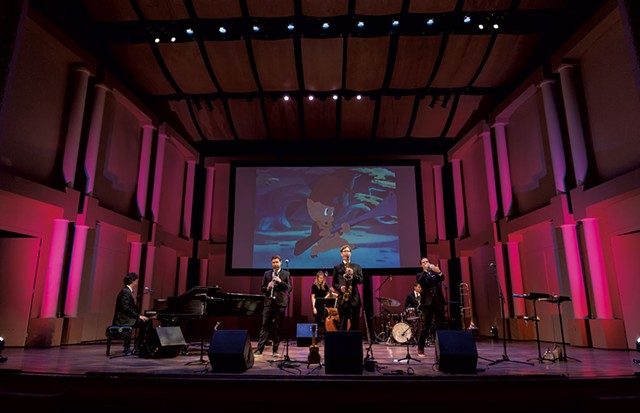 For decades, many American children spent their Saturday mornings watching hours and hours of cartoons. With bowls of Frosted Flakes piled high, they stared at their cathode-ray tube televisions, gawking at the antics of Bugs Bunny, Pluto and Popeye the Sailor. But what many of them didn't realize was that they were simultaneously being treated to world-class selections of music showcased in cartoon scores.

The Queen's Cartoonists know this well. The New York City ensemble exclusively plays music that once backed animated shorts, with a heavy emphasis on jazz. Along with its full orchestrations, the group adds in Foley sound effects when necessary, heightening the madcap antics of provocateur Daffy Duck and flapper Betty Boop, among other cartoon characters.

To fully cement the connection, the Queen's Cartoonists perform in sync with projections of the animations from which the music originated. This not only highlights the bond between the two art forms but also heightens them both.

The Queen's Cartoonists perform a sold-out show on Friday, October 16, at the Shelburne Museum. Seven Days caught up with bandleader Joel Pierson by phone.

SEVEN DAYS: What are the Queen's Cartoonists' origins? 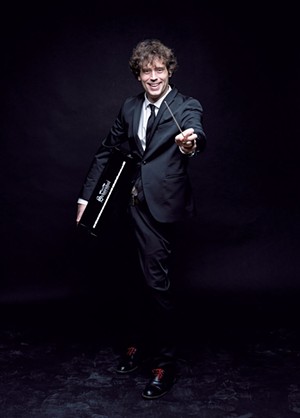 JOEL PIERSON: For a long time I've thought about how to make jazz relevant. As jazz musicians, of course, we all think it's relevant. But very few people are listening to jazz, right? You don't have superstars like in the 1940s or '50s. Or there are very few of them. How do you make people want to come to a concert if they normally say, "Oh, I don't really listen to that music. It's too complicated," or "I don't relate to it."

So one day I was thinking about the intersection of the golden era of jazz and the golden era of animation. There's a lot of overlap between those two classic American art forms. I started researching and figuring out which films are in public domain and transcribing the soundtracks and arranging them for my ensemble.

SD: So you essentially reverse-engineered the music?

JP: Yeah, totally. We want the presentation to look smooth, but in reality we're cutting up these cartoons, recomposing whole sections, doing stuff to try to make it work better in a live setting.

SD: How faithfully does the band re-create everything?

JP: There are definitely liberties, but they're taken in order to make the program go smoothly and be listenable. There's only so much "cartoon recitative," as I call it, that a listener can take: people falling down stairs, music that's starting and stopping, being really manic. People like a little bit of that, but you can't do two hours of that. We're always looking for ways to hit people with something that's really authentic, with all of the Foley and sound effects.

SD: What elements do you look for in a cartoon score?

JP: The most important thing is: Do we have permission? We start there. The show we're presenting in Vermont is mostly based around classic characters. As much as I'd love to show a Roadrunner cartoon, there aren't any in the public domain, so it's off the table.

If it's public domain and has the right character I'm looking for, I just listen and think, How would we do this? Are there really unusual elements to this?

SD: Are there particular characters that always have the best or most fun music?

JP: Anything written by Carl Stalling we love. He's the guy that was the musical director for Looney Tunes for a long time. That's the really wild stuff. There's this Daffy Duck cartoon we're doing that's a nonstop onslaught of sounds and sound effects and stops and starts and weird pop songs from the '30s thrown in.

SD: How much context do you provide to the audience?

JP: That depends on the concert and how responsive the audience is. Sometimes I'll talk quite a bit about cartoons. Sometimes we do less of that.

SD: When transcribing scores, have you ever encountered a sound or instrument and just can't figure out what it is?

JP: There are some sound-effect issues with things we can't really find. We've been dying to get a Klaxon horn, which makes that "ah-OO-gah" sound, like an old car. But they're really hard to find. You can find them broken, but then you have to get them fixed and it's expensive. That's a specific thing I'd love to use.

SD: Have you figured out why some cartoons are in the public domain and others, from the same era, are highly protected?

JP: You know, that is the million-dollar question and I have no idea. There's stuff from the '60s, '70s and even the '80s that's public domain. But then there's stuff from the 1940s that's totally off-limits. I think that some of those companies just didn't bother to re-register those things. Film trailers up to 1964 are public domain because they didn't have any notices on them until the studios figured out they needed to do that.

SD: What are some ways that cartoon scores differ from traditional film scores?

JP: There's definitely a different set of emotions that cartoons are trying to bring out. The cartoon scores are so tightly connected to the action, especially with the Carl Stalling stuff. If someone falls down stairs, the orchestra or Foley needs to make it sound like falling down stairs. That's the main difference, and it really works in our favor as jazz musicians because we like to play really fast, precise music.

SD: How have cartoon scores evolved throughout the decades?

JP: Let's say that postwar, maybe a little later, they just cut the budgets. When Looney Tunes was a thing, Tunes [was] spelled T-U-N-E-S because Warner Brothers was trying to monetize its recording catalog. The visuals and the music were equals in those films. And that just never happens anymore, in cartoons or in regular movies.

They say Stanley Kubrick would cut scenes around a piece of classical music he liked. I don't think that exists anymore. Once you get into the 1960s, it's pretty boring. It's obvious both the animation and music budgets were lower.

SD: What are some newer, more obscure titles in your program that general audiences might not know?

JP: We're going to do three or four pieces by living animators. We're going to show a contemporary piece called "Sauna Tango," which is this Irish animator Vera Lalyko. It's a little film about this Turkish sauna, and this masseur guy kind of beats them up and throws them back out. It really keeps changing depending on what's happening on-screen. I love playing that.