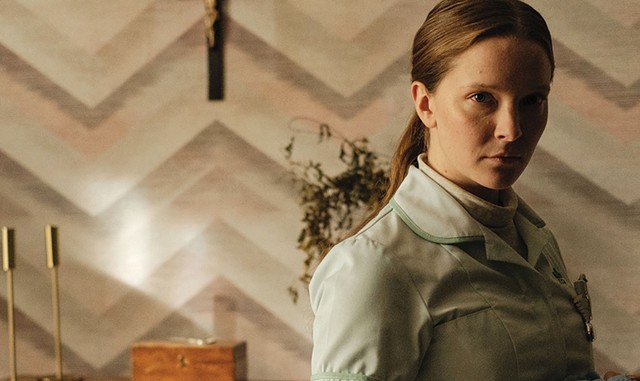 This week, I watched the debut feature of a promising young writer-director that premiered at the 2019 Toronto International Film Festival. Saint Maud is a psychological horror film from UK filmmaker Rose Glass that had a small pandemic theatrical release in the U.S. and is now streaming on Hulu, Paramount+, Epix, Philo and Sling.

In a seedy seaside resort, a young hospice nurse named Maud (Morfydd Clark) prepares herself for a new live-in job. Seemingly alone in the world, Maud is an unorthodox Catholic who speaks informally to God as if to her diary, begging him to reveal the plan she believes he has for her.

Maud's new client is the terminally ill Amanda Köhl (Jennifer Ehle), a glamorous, chain-smoking modern dancer who lives in an old house full of art deco wallpaper. Lonely herself, the older woman shows an empathetic interest in Maud's religious beliefs, and soon Maud is convinced she's found her calling — to save the dying woman's soul.

Determined to prepare Amanda for divine judgment, Maud attempts to banish her patient's frivolous young lover (Lily Frazer) from the house. When her plans go off the rails, so does Maud — and we learn more about who this young woman really is and what she's capable of.

I'm fascinated by modern Book of Job stories — fictions in which the protagonist struggles to believe in a loving God despite ample evidence to the contrary. As likely to be created by agnostics or atheists as by believers, these dark tales cut to the heart of modern isolation and the craving for meaning. They also tend to be at least adjacent to the horror genre, because much of the Old Testament is pretty horrifying in a modern context.

Maud is very much a figure in this tradition. Like haunted Hazel Motes in Flannery O'Connor's Wise Blood, she mutilates herself in an effort to get closer to God. (Warning: Self-harm features prominently in this movie.) Clark gives a stunning performance, reminiscent of Sissy Spacek in Carrie, as a woman who's easy to overlook and underestimate until she becomes an avenging angel.

Suffering has long been associated with sainthood, and "Don't waste your pain" is Maud's mantra. Her character evokes the paradoxes of victimhood and power outlined in Leslie Jamison's landmark essay "Grand Unified Theory of Female Pain."

Amanda, by contrast, is more of a devotee of pleasure and determined to remain one to the end. A wonderful, underrated actress, Ehle might be best known these days as the doctor who heroically jabs herself with an experimental vaccine in Contagion. In Saint Maud, she gets to show another side: jaded, worldly and flirtatious. Amanda finds Maud and her faith intriguing but naïve, and she isn't above being a bit of a mean girl. The interplay between the two women is so richly layered that I wish there'd been more of it.

Saint Maud is on the far psychological end of "psychological horror," a movie less about scares than about dread. Glass' direction keeps viewers constantly off-kilter. When Maud lives with Amanda, the dark shadows, sickly green accents and lurid patterns on the walls give us the sense of being trapped in a demented dollhouse. (What is it with horror movies and wallpaper? Maybe those midcentury patterns represent the ghost of poor decorating choices past.)

Later, when Maud leaves the house and starts to unravel, bold angles and effects (such as images rotated 90 or 180 degrees) bring us along on her harrowing ride from reality to ... somewhere else.

Glass keeps us guessing about whether Maud is mentally ill or actually in communication with the divine. The filmmaker has said she pitched her script as a modern-day female Taxi Driver, a movie famous for its darkly comic ending — and for being misread by viewers who were inclined to identify with its disturbed hero, Travis Bickle. (Most notorious among such viewers was attempted presidential assassin John Hinckley Jr.) Like Travis, Maud eventually finds a form of fulfillment for her obsessions. But Glass' ending is less ambiguous — and more horrifying.

Saint Maud is derivative of a whole host of other movies, but Clark's fearless performance and Glass' assured direction make it stand out in the crowded indie-horror landscape. Film fans should hope to see more from both of them.

The Rapture (1991; rentable for cheap): This bizarre cinematic Job story from writer-director Michael Tolkin is unjustly forgotten. Mimi Rogers gives the performance of her career as a party girl turned evangelical. One moment, her character is getting it on Cinemax-style with a young David Duchovny; the next, she faces apocalypse, and that's not the most shocking twist.

A Serious Man (2009; rentable): Possibly my favorite Coen brothers movie is this dark crisis-of-faith comedy in which Michael Stuhlbarg's character imagines he sees God in the form of a CG whirlwind, as does Maud.