The Pilgrims, It's Not Pretty 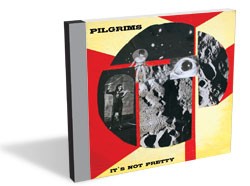 If you’ve heard of the Pilgrims before, there’s probably a solid chance that you’ve heard of an entirely different band that also happens to be called the Pilgrims. It’s just one of those band-around-town kind of names. However, these Pilgrims, from Windsor, are far from your average Pilgrims — often folk-y, maybe a little obnoxiously historical or even perhaps a Spanish indie band. These Pilgrims are rock dudes who sound hell-bent on tearing down the barriers mysteriously constructed between every generation’s punk and alt-rock scenes.

“That Gold,” the first track on It’s Not Pretty, the Pilgrims’ first full-length release — and second offering for Upper Valley collective/label What Doth Life — opens with some lone crunchy guitar chords reminiscent of the intro guitar part to the Clash’s 1978 “Clash City Rockers.” The full band’s entrance shifts the song’s 1970s punk throwback sound swiftly forward into an early R.E.M/Replacements ’80s basement-rock kind of vibe. The bass line is maybe a little too funky and the beat is maybe a little too calculated to really call it punk rock, but there’s no question that it’s raw. Vocals, when they enter, alternate between whiny rude-boy — think Billy Joe Armstrong on 1992’s Kerplunk — and throat-shattering scream.

It’s all there on the first track, 1978 to 1992. And while the Pilgrims don’t stray too far from this stylistically on the remaining 12 tracks, they do keep It’s Not Pretty moving at a fun, fast pace.

“Snow Storm,” the album’s fifth track, provides a break from the in-your-face aesthetic with which the Pilgrims apparently feel most comfortable. It comes as a pleasant surprise to find that these boys can play a mellower, gently sung song well. Country-tinged guitar breaks come and go throughout and, except on the power choruses, the drums only threaten to piss off the neighbors. “Snow Storm” also seems to be the Pilgrims’ best effort to write a serious, emotional song. Lines like “I’m painting pictures, burning bridges all over this town” and “I’m shaking like a runaway child when you hold my hand” stand out against the tongue-in-cheek lyrics found on the majority of the album.

It’s Not Pretty ends much the same way it begins and, while I usually prefer those typically nostalgic, looking-back kinds of closing tracks, I respect the Pilgrims’ choice. “Saint Paul” is as simple and urgent as any of the tracks that came before it, and highlights the Pilgrims’ talent for arranging extreme rockers and playing them extremely well.

The Pilgrims play Charlie O’s in Montpelier this Friday, October 19, and Radio Bean in Burlington this Saturday, October 20.

It’s Not Pretty is available at pilgrimsvt.bandcamp.com.