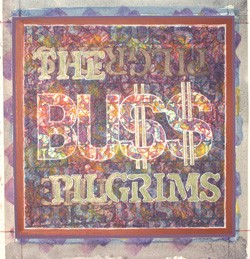 We last heard from Windsor’s the Pilgrims just last October. That’s when the prolific alt-rockers released It’s Not Pretty, which was in turn a follow-up to their 2011 debut EP, Nobility, on the non-label What Doth Life. Now, the Pilgrims are back with Buss, a logical, if often similar, sequel.

Buss opens with a somewhat surfy, somewhat bluesy guitar riff before the song fully blossoms into the kind of punk-rock anthem that is the Pilgrims’ signature. The track, “Trust,” is a bitter-tasting alt classic about the dualities of meeting someone new. The lyrics progress quickly from sweet (“She’s dancing under my eyelids / Can’t even think about sleep.”) to sour (“Got no love / We’ve got no trust.”) And then … it’s over.

“Duck and Cover,” which is hands down the record’s most interesting and audacious track, opens with a marching drum beat and introduces the song’s up-tempo, nearly island-infused guitar riff. More interesting ideas and effects appear on this track than on the rest of the songs combined, and the result is something like a harder but less pretentious Vampire Weekend. So … the Clash, I guess. Sing-along choruses — complete with hand claps — betray hints of Big Star and similar 1970s almost-classic-rock bands. This is the melting pot in which the Pilgrims are most creative.

The title track, with its layered lead vocals and spacey sustain, suggests a basement rendezvous of Built to Spill and the Kinks. The Pilgrims never stray far from their punk-rock inclinations. But songs such as “Buss” and album closer “Western Paradise” illustrate how the band can stick to their natural inclinations while also seeking a new sound. In other words, the Pilgrims haven’t abandoned their raw aesthetic; they’re simply digging a little deeper. The results are imperfect but promising.

Like its predecessor, Buss visits a variety of heavily distorted, underground rock scenes from multiple eras. The notable influences present on It’s Not Pretty remain (the Clash, the Replacements, etc.), but it sounds as though the Pilgrims have slightly expanded their record collections (the Kinks, maybe some Pavement) and taken notes.

The Pilgrims play the Higher Ground Showcase Lounge in South Burlington with Bad Things on Wednesday, July 31, and a CD-release show at Tupelo Music Hall in White River Junction on Friday, August 2. Buss is available at pilgrimsvt.bandcamp.com.