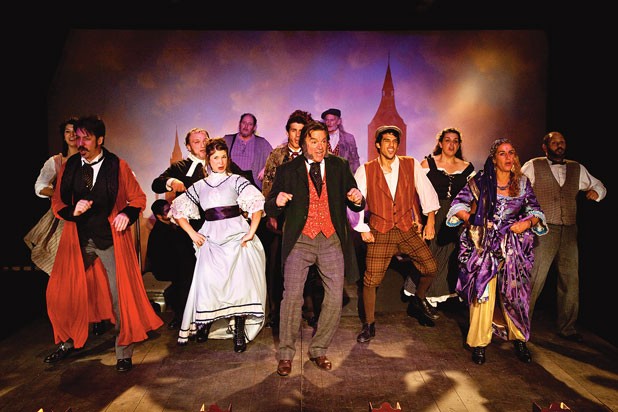 It has been said that theater is among the most democratic of art forms. Its roots are in ancient Greece, where theater festivals were important civic events. In today’s theaters, as playwright David Ives has written, one must negotiate for the shared armrest with the person sitting in the next seat. Democracy in action! Audience members also have the freedom, should they wish to avail themselves of it, to express their opinions of the performance while the show is under way — to players who just might register this response in real time. Hail the First Amendment!

The Mystery of Edwin Drood takes this notion of democratic theater to a new level. A murder mystery set in Victorian England and adapted from Charles Dickens’ unfinished novel of the same title, the musical theater production allows audience members to vote on the resolution of a few plot points, including the most pivotal issue: whodunit. The players then enact the closing scenes that fit the audience’s choice. This Choose Your Own Adventure-esque gimmick engaged Broadway audiences when the show debuted in 1985, with book, music and lyrics by Rupert Holmes.

In the charmingly rustic Skinner Barn, where the Commons Group is currently staging Drood, these interactive sequences take on the quality of a town meeting. The moths and occasional tires crunching down the dirt road behind the barn add to the effect. These bursts of local color frame a piece of theater marked by fully realized performances of generally high caliber. Coincidentally, the show’s director, Nick Corley, will join the cast of a Broadway revival of the play this fall. While Waitsfield is a world apart from the Great White Way, Corley and cast have clearly set a high bar for their humble production.

The cast’s eagerness to invite the audience into their theatrical world is evident even before the mystery is set in motion, as actors mingle with theatergoers, making English-accented small talk and sometimes alluding to what is about to take place. By curtain time, the room is raucous with chatter and laughter. When Peter Boynton steps onstage in the guise of William Cartwright, impresario of London’s Musical Hall Royale and the evening’s master of ceremonies, he extends the welcome by addressing the audience directly. The Mystery of Edwin Drood is a play within the play, with Cartwright introducing each actor in his company as he or she appears in the performance. Standing just to the respectable side of raffish, he sets a mirthful mood, luring us into the spectacle like a carnival barker.

The story that ensues is, in some respects, familiar: In the city of Cloisterham, young Edwin Drood (a cross-dressing Wendy Fuller) is betrothed to the comely Rosa Bud (Laura Wolfson). Trouble is, Edwin’s uncle, John Jasper (James Sasser), who is also Rosa’s choral tutor, is madly in love with her. With the arrival of two adult orphans from Ceylon, Neville and Helena Landless (Erik Freeman and Sharon Dube, respectively), the plot thickens, as Neville also displays an attraction to Rosa. Jealousies flare when the group, along with the Landlesses’ chaperone, Reverend Crisparkle (Michael Halloran), gathers at John Jasper’s house for Christmas dinner. It is a dark and stormy night — ideal for a diabolical act. By sunrise, one has been committed.

Overall, the acting in The Mystery of Edwin Drood strikes broad notes in concordance with this melodrama. At moments, however, the players push beyond superficial portrayals to plumb greater emotional depths. As John Jasper, Sasser is especially deft at showing the mental anguish behind his steely, villainous glares. As Rosa, Wolfson affects convincingly the heavy emotional burden with which her particular romantic circumstances have saddled her.

As the title character — performed by actress Miss Alice Nutting in the frame play — Wendy Fuller effectively plays against gender, though what Holmes was trying to achieve with this quirk of casting isn’t entirely clear. Fuller is strongest in a pivotal scene with Wolfson and, later, in a comic bit that cannot be revealed without introducing a spoiler — a danger even in a review of a play with an unpredictable ending.

In a supporting role, Halloran turns in a fully realized depiction of an anxious vicar in the midst of wickedness — quite possibly his own, should the audience make that choice. Although the sweat on his brow may have resulted from the heat (really, it’s the humidity) on the Skinner stage, he wore it as naturally as his clerical collar. As Princess Puffer, a fallen lady who runs an opium den, Judy Milstein earns laughs for her bawdy, streetwise persona — but also sympathy for her sad life story revealed in mournful song.

Corley’s cast demonstrates laudable range in the show’s demanding musical numbers — 21 in all. Holmes’ lyrics are cleverly wrought to convey character and dramatic situation. Sasser and Wolfson sing the haunting “Moonfall” in duet to describe John Jasper’s yearning for his nephew’s fiancée. “No Good Can Come From Bad” becomes a kind of anthem of the accursed, as sung by the dinner guests and staff on that fateful Christmas night. The all-cast number “Off to the Races” restores rollicking good cheer to the show over the interval between first and second acts.

The show’s “orchestrette” provides solid musical backing despite being only a trio: musical director Jono Mainelli and Nate Venet on keyboards and Nick Detter on percussion. It may be all this cast needs to execute Holmes’ catchy tunes, and it may be all the Skinner Barn can take, given the size of the cast. The venue’s charms notwithstanding, the room is not great for sound projection. Some of Holmes’ quicker, more complex lyrics are difficult to decipher from solo singers.

The challenge of vocal projection is no doubt compounded by that of wearing Victorian-era garb at the height of summer. But if the cast members’ physical exertions are, at times, apparent, they maintain unflaggingly high energy throughout this somewhat lengthy, two-hour-plus production. Some players, such as Sasser, even gain intensity toward the finale. One of the more high-spirited musical numbers, “Lover’s [sic] Duet,” features Milstein’s Puffer and a considerably younger male Deputy (Nick Caycedo) in a paupers’ pas de deux — and a romantic coupling chosen by the audience.

The interactive gimmick adds a fun flourish to a musical that could probably work without it. In this creditable production of The Mystery of Edwin Drood, it’s a reminder that, even in the face of murderous machinations, taking theater seriously — or not — is a matter of choice.

"The Mystery of Edwin Drood", produced by the Commons Group, Wednesday through Sunday, August 8 to 12, 8 p.m. at Skinner Barn in Waitsfield. $20. Info and tickets, 496-4422. theskinnerbarn.com