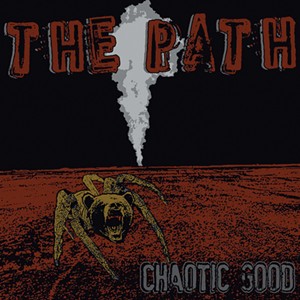 We're often told to stifle our aggression, refine our anger and take the high road. And, really, it's no surprise given the age we live in. Violence, hatred and injustice abound; conflict is everywhere. And while cooler heads are no doubt needed, this is traditionally a time for aggressive music to rise to the occasion. Hardcore music is custom-made to address the kind of fetid, corrupt behavior currently dominating American politics. In the tradition of Black Flag and Minor Threat, the Path have released the blistering Chaotic Good.

Through 11 ferocious tracks, the band crafts a rare thing indeed: a truly emotional, honestly pissed-off record that never devolves into hand-wringing or that over-the-top facsimile anger some bands wave around. The Path's fury oozes from their music. With the blitzkrieg onslaught of the rhythm section, whiplash-inducing guitar riffs and the howls of front person Jon Berg, this record opens full throttle, its veins bulging as it screams.

"All Hail Spider Bear" comes in like a burning tire rolling through a street just before a riot hits. At a scant 35 seconds, it's the shortest offering on Chaotic Good, though it bleeds so nicely into "Don't Drink the Water" and "I See Demons" that the first several tracks are almost a medley. Drummer Liam O'Neill pushes the tempo mercilessly.

For all the little movie sound clips (Joe Pesci and Brad Pitt make cameos) and lyrics such as "You could have rubbed one out / to keep the demons down / but you chose to let them out," the real power of the record is its embrace of the political thread We're seriously not going to fucking take it anymore.

Nowhere is that more evident than on "I Am the Revenge." As the Path launch into a crushing groove, the band bellows together, "One hundred Nazi scalps" — a reference to the Nazi-hunting soldiers in Quentin Tarantino's World War II film Inglourious Basterds. As Berg roars out oaths and reminders of Nazi atrocities, guitarist Matthew Kimball and bassist Andrew Thomas escalate into a frothing rage. It's safe to assume where the band falls on the "Is it OK to punch Nazis?" debate.

That's not to say that Chaotic Good is a purely political album. With a title right out of a Dungeons & Dragons game, the record was bound to have songs like "Wizards Walk Among Us." There's also the local-scene-centric "I'm Glad You're Gonyea," an ode to punk band Doom Service's Justin Gonyea, a talented friend who no longer lives in Vermont. "The world's outside, and it's been calling your name / like a needle in the eye trying to get you outside," Berg sings of his comrade, missing him while simultaneously proud to see his matriculation.

Chaotic Good is a heart-on-sleeve record, full of compassion as well as anger, and it feels very much of this time. It's aggression with a purpose, a record to rage and reflect on all at once.

Chaotic Good is available at stateofmindrecordings.bandcamp.com. The Path celebrate its release on Saturday, August 3, at Junktiques Collective in Burlington.

Speaking of The Path, Chaotic Good