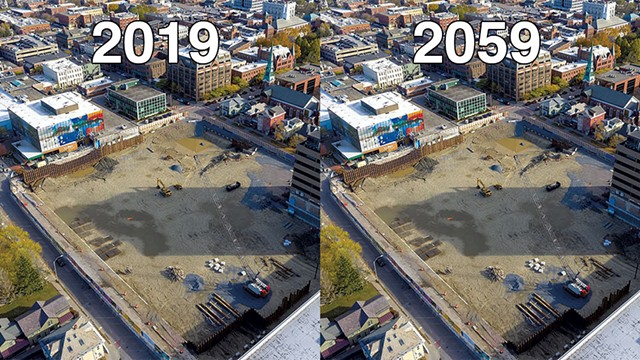 CityPlace Burlington project officials say they are absolutely stunned by the remarkable accuracy of a smartphone app that has taken the internet by storm.

“We thought, Why not upload a picture of the new face of Burlington and see what it’ll look like 40 years from now?” said CityPlace developer Ani Dainow. “Incredibly, the resulting image matches our current architectural plans exactly. Like, to the T.”

At first look, the before and after photos appear identical. But Dainow said the differences are clear to anyone with a “developer’s eye” for detail.

“If you look closely, you’ll notice that a construction crane has been moved several hundred feet from its original location,” explained Dainow. “I know the image is just a rendering, but it perfectly encompasses the significant progress we’ve made, and will continue to make, on this wonderful project.”

The image was so accurate, in fact, that a highly anticipated public update on the project has been abruptly cancelled.

“We have no new information to share that wouldn’t be better expressed through the FaceApp image,” said a city official who asked to remain anonymous because “this shit is embarrassing.”

FaceApp, a Russia-based company, has recently come under fire for potential national security and privacy risks to its millions of users. CityPlace officials, however, do not seem too concerned about any possible risks from their use of the app.

“Honestly, we’ve already divided and angered so many people with this project that I wouldn’t be surprised if the Russians tried to make one of us president some day,” Dainow said.