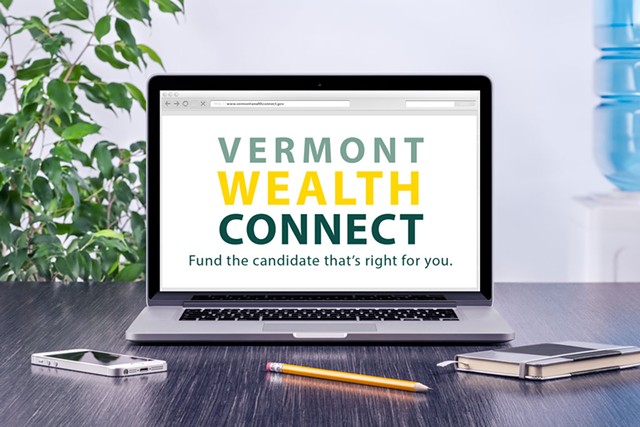 This election season has been the most devastating thing to happen to brain cells since the invention of lead paint. That's why the State of Vermont is already taking steps to make sure the next election cycle runs more efficiently for those who can afford to influence it.

Dubbed “Vermont Wealth Connect,” the new online democracy exchange system will make it much easier for wealthier citizens to find — and fund — the candidates who would be most beneficial to their interests.

“I don’t think the average Vermonter understands how hard it is for wealthy folks to find ever more creative ways to funnel lots of money to their preferred candidates without violating campaign finance regulations,” explains system architect Paul Wafflerton. “There’s a real art to knowing when to contribute as an individual, through a political action committee, a super PAC or the multitude of businesses you happen to control.”

Vermont Wealth Connect is designed to make that process easier by using a series of complex algorithms that can automatically forward massive sums of cash to candidates of choice without violating a single state or federal campaign finance law.

“Users simply create a profile that tells us what business ties you have and how much you’d like to contribute to subverting democracy, and the system takes care of the rest,” explains senior engineer Michelle Rotsdam. “At the click of a button, that money will flow through an intentionally complicated network of super PACs, businesses and unmarked envelopes to your preferred candidate's campaign.”

The system was designed to help ease some of the unbearable burdens of being rich. But it will also make life easier on Vermont candidates seeking contributions from sources outside the state.

“The geniuses behind Vermont Wealth Connect understand how inconvenient it can be for candidates to have to travel to D.C. for swanky fundraising dinners when they have to be back home for a roundtable debate at a county fair the next morning,” says political consultant Sal Greisyman. “This platform will allow the big players in D.C. to easily pump money into the Vermont candidates of their choice without forcing anyone to travel. No one will have to be inconvenienced while undermining democracy."

The system is also designed to be completely nonpartisan, so no political party will ever have to pursue meaningful campaign finance reform.

“As long as one party is accepting massive contributions, the other parties will have to continue accepting them, too, in order to remain politically competitive," said Greisyman. "Yet they can pretend to oppose it the whole time. It's a beautiful thing.”

Naturally, the Vermont Wealth Connect Democracy Exchange has already drawn criticisms from voters. They claim it will allow elections to continue to be bought and sold at the expense of ordinary citizens.

“It’s indefensible,” said Melinda Belittle of Montpelier. “All it does is make it easier for the wealthy to distort our democracy.

"Luckily," she added, "it’s a statewide online exchange, so we know it’s prone to glitches and bugs. My hope is that the bugs will cause some of that money to accidentally fall through the cracks and actually help the average Vermonter.”