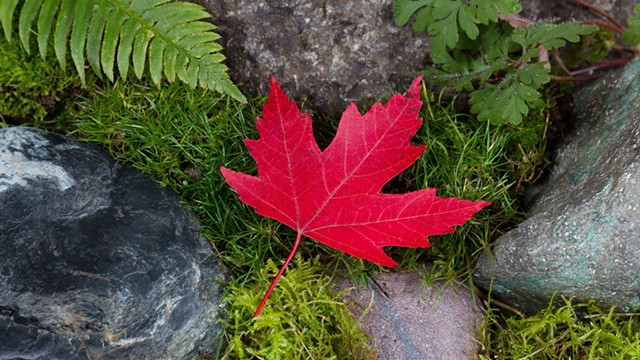 Investigators say a red maple leaf collapsed and fell gracefully to its death just outside Bingham Falls in Stowe on Sunday.

The leaf had been working especially hard to “really pop this year” when it lost its grip on the branch it had been hanging onto for months, according to neighboring leaves.

“It was the kind of leaf that always put itself before others,” said a leaf who lives just down the branch from the victim. “It didn’t care if it was peak foliage or a week early. It would glow its absolute hardest whether it was for a crowd of 10 peepers or 1.3 million peepers.”

"I think it was so eager to make an impact in this state that it essentially worked itself to death," said a leaf on a nearby alder tree. "It's a shame, too. It had its whole autumn ahead of it."

Area leaves have reportedly been hard at work being as vibrant as possible, 12 hours a day, seven days a week as part of a coordinated effort to stimulate the Vermont economy.

“The state is counting on us to bring in something like $280 million this year,” said a leaf on a large-tooth aspen in close proximity to the red maple tree. “I bet you can’t find me a single sales team in this entire state that is expected to hit those kinda figures in just a few weeks time.”

Some trees in the region say that the immense economic pressure is unfair and could eventually lead to the premature death of several millions leaves.

“It’s really messed up what happened to that poor red maple leaf, but I have a feeling this is only the beginning,” said a red oak tree in the generally vicinity of the aforementioned red maple.

“Peepers can’t possibly understand how much effort these leaves put into changing colors and being so inexplicably radiant year after year,” he added. “They're potentially shaving days off of their lives, and for what? For the honor of  a #nofilter hashtag?”

Despite these apparent occupational hazards, trees say they still have no trouble finding new leaves who are willing to risk it all and change their colors each fall.

“I don’t know why anyone would sign up for this job, but I’m thankful they do,” said a pin cherry tree in the same general part of the forest as all those other trees. “And Vermonters should be, too.”

Surviving family members say the fallen red maple leaf was an organ donor and its remains will be donated to anti-aging research in humans.