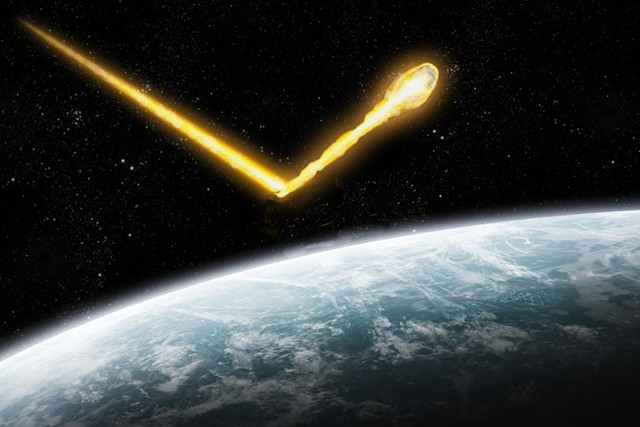 A massive asteroid that appeared to be heading directly toward planet Earth has abruptly changed its course, according to members of the Vermont Astronomical Society.

“In general, it's pretty hard to predict exactly where an asteroid is heading,” explained amateur astronomer and aspiring Mars mission volunteer Dale Herdbrook. “But we’ve never in history seen a celestial body change its course so drastically. It was almost as if it suddenly decided a collision with Earth would be a total waste of its time.”

Herdbrook went on to explain that no currently accepted model of physics can begin to explain how or why the space rock could have so dramatically diverted from its trajectory.

“It seems as though this asteroid vehemently rejected everything we know about the observable universe and decided to take its own path instead,” he added. “Perhaps it was desperately trying to make a point that no one else could possibly understand?”

“Asteroids are notorious for being showboats,” she explained. “Everything they do is for attention and acclaim, and they’re pretty much guaranteed to achieve universal notoriety if they can claim to have killed off an entire species.

“My hypothesis is that, once C/2017 ER61 got a little closer to Earth, it realized that humans were already doing a phenomenal job of driving themselves to extinction. So it decided to veer off in search of other forms of life to destroy.”

“Personally, I think what this asteroid has done is pretty admirable,” noted telescope fetishist Simon Garfondle. “I think on some level it realized that destroying all of humanity in an instant would minimize all the hard work we humans have done to accomplish this ourselves, albeit at a glacial pace.

“I, for one, applaud C/2017 ER61’s apparent commitment to allowing humans to receive all the credit for our own ingenuity and dedication to self-annihilation,” Garfondle said.

“Not to mention that eradicating a species is way less impressive when they were well on their way to doing it themselves,” added Foreelia.

Regardless of what caused C/2017 ER61 to divert course, the directional change is sure to be received as welcome news to anyone who prefers long and drawn-out endings.

“It was expected to hit around 2032, so, by my calculations, this should buy humanity up to an additional 150 years of existence, pending any unforeseen disasters, of course,” said Garfondle.

Despite his gloomy forecast, Garfondle did suggest there was still good reason for humans — and Vermonters in particular — to remain optimistic.

“According to my close friend and environmental scientist, carbon emissions in Vermont have actually dropped by 5 percent since yesterday, thanks to a courageous Tweet,” he said. “Sure, it’s no international climate pact — or even a statewide commitment to reduce emissions — but, in this day in age, that constitutes real progress.”