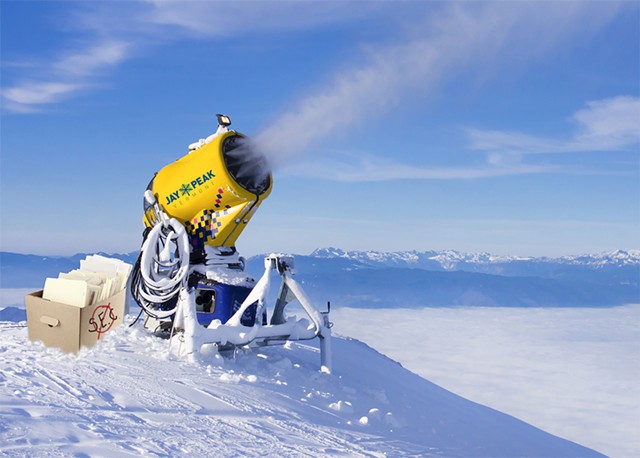 Their patented “cash-flow snowblower” cannon can produce manmade snow in temperatures of up to 47 degrees Fahrenheit, potentially extending the ski season by several months. The snow's higher melting point is made possible due to the addition of an unconventional yet abundant ingredient: shredded financial documents.

“We experimented with a wide array of materials while developing this technology,” explained chief engineer Ty Pengles. “Coconut oil, vape pen exhalations, the tears of our investors — you name it. It wasn’t until I tossed an inadvertently shredded 401(k) statement into the cannon that we  found the magic formula.”

Pengles said that, unlike other paperwork, shredded financial documents tend to be “fluffier,” padded by make-believe figures and projections that vanish into thin air. Those hollow figures are easily converted into a weightless powder comparable to the fresh snowfalls that inspire devoted skiers and snowboarders to wake up early and make the first chairlift.

The resort has been quietly testing its new snow-making apparatus since September, and so far the response has been overwhelmingly positive.

“It’s the softest pow I’ve ever carved!” exclaimed amateur snowboarder Skylar Muddlins. “It just feels amazing under your board, like gliding on a pillow of financial turmoil. I’m mad hyped. From now on, the only forecast I’m checking in the morning is the financial one!”

A spokesperson for Jay Peak said the technology has the potential to simultaneously resolve two major concerns looming over the resort. The first, of course, is the threat of a shortened or nonexistent riding season due to the effects of global warming. The second is , well, alleged fraud.

“It was all too easy to point fingers in the aftermath of the massive fraud allegations that rocked this resort earlier in the year,” said Jay Peak marketing head Veronica Toolstand. “But to anyone paying close attention, there was only one clear culprit — the evidence.”

Toolstand explained that the Securities and Exchange Commission seized more than 300,000 financial documents during its investigation of the “Ponzi-like” scheme.

“If we only had this technology a few years ago, those documents could have  instead been used to create manmade snow and this whole fiasco would have been avoided," she lamented. "It’s just another example of the systemic government waste we are now trying to avoid.”

When asked if she was advocating for the destruction of evidence in cases of alleged fraud, Toolstand replied that she was simply doing her part to prevent fraud in the first place.

“Without evidence, there can be no fraud. Just like without snow, there can be no resort," she reasoned. "We’re just giving the winter sports community what it wants — longer seasons and the kind of economic certainty that is required to participate in these sports in the first place.”


The Parmelee Post is a weekly series featuring tough investigative reporting on news that hasn't happened. Yet.