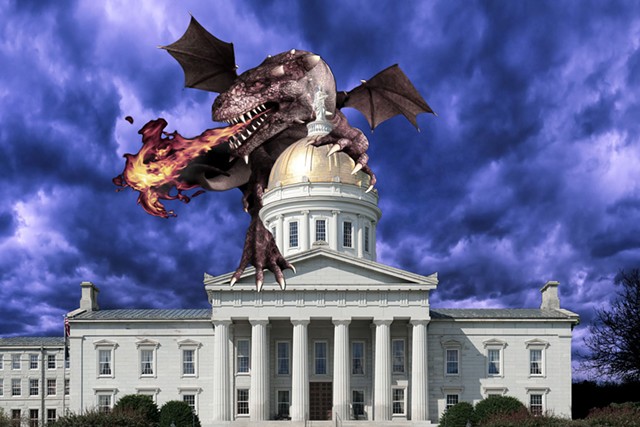 Fans of the long-running Vermont series “Dome of Gold” have signed an online petition calling for a remake of the 2019 legislative season finale.

The finale episode, which aired on Wednesday, was almost universally derided as unrealistic, directionless drivel. The subsequent petition accuses the writers of the political drama of being “woefully incompetent.”

“How could a season that began with so much potential just sort of fizzle out with so many plot holes left wide open?” asks the petition, which as of this writing had garnered more than 10,000 signatures and countless comments.

“The plot development was frankly atrocious,” commented longtime viewer Ray O. Shunshine. “Why would the writers even bother setting up a Democratic supermajority just to water down and eventually abandon their top legislative priorities for the year?" He added, "Without the books to fall back on, they’ve clearly lost their way!”

The series' characters were simply not believable enough for viewers to sympathize with, said several other commenters.

“So they finally have the numbers to override the King’s vetoes, and they can’t even pass a paid family leave or minimum wage bill?” observed commenter Claire Texplaine. “Yet we’re supposed to believe these characters actually care about working-class Vermonters? Who comes up with this shit?!”

Viewers also noted that the King barely made an appearance throughout the season, which left many guessing what his actual intentions and desires were.

“Dude barely has time for legislative leaders, but will eagerly meet with the former King of Wisconsin?” pondered commenter Rich Aintit. “And in the end, he still comes out looking good? Pretty lazy writing if you ask me!”

“In previous seasons, the Kingdom of Vermont was often seen as a bold leader on some the most important issues facing the American Universe,” noted commenter Kensly Eye. “But somehow they made it through an entire season while barely even mentioning climate change? What an absolute joke!”

Not everyone who signed the petitions felt the entire season was a dud.

“The abortion episode was a very pleasant surprise," said commenter Al Bamasux, "but that hardly makes up for the complete and utter incompetence of the finale!”

Sources say it is highly unlikely that showrunners will release an alternate ending despite the finale's devastating ratings plunge. For now, viewers can only hope that next season, which is slated to premiere in January, will be more meaningful than the last.