The Parmelee Post: Demolition Derby to Be Held in City Market Parking Lot 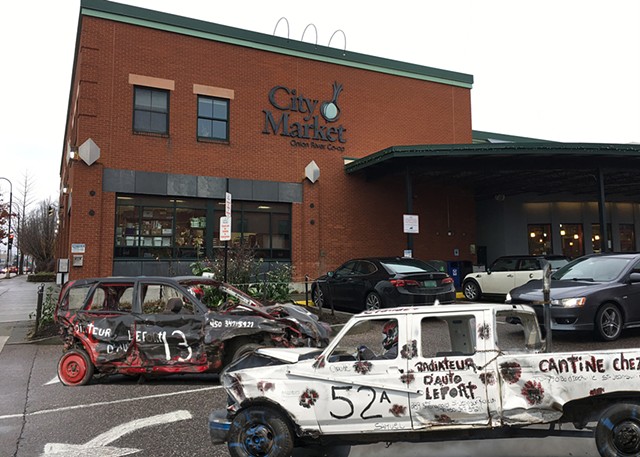 Buckle your seat belt, throw on a helmet and prepare to say goodbye to the family minivan! The metal-bending carnage of the demolition derby is coming to Burlington’s community grocery store.

Joining in the longstanding tradition of countless county fairs around the nation, City Market/Onion River Co-op will host its first annual Crashes for Radishes Demolition Derby in the store’s parking lot on Friday, December 9.

“The idea came to me one day while I was rushing to the store to try and grab the last James Lean breakfast sandwich before they were all removed from the hot bar,” event organizer Jill Wascinski explained. “It was already five after 11, so I knew I was cutting it close and needed to hurry.”

As Wascinski frantically swerved her fully loaded Land Rover into the lot, she said she was equally impressed and appalled by her own blatant disregard for other human life.

“I nearly crushed a cyclist who was riding on the sidewalk, and just barely avoided a Prius backing out of one of those spots closest to South Winooski Avenue," she said. "At first I felt terrible, but, when I looked around, I quickly realized that everyone else in that lot was also about to run someone over or be run over. That’s when I realized we had a huge opportunity.”

Wascinski immediately contacted renowned derby consultant Wayne “The Wrecking Ball” Malone, who admitted he was initially skeptical of the idea.

“Generally, derbies are held on open fields or dirt tracks,” he explained, “so I wasn’t sure how it could work. But then I spent some time closely monitoring those parking spots closest to South Winooski, which seem to exist solely to cause traffic incidents, and I realized the lot was actually perfect.”

Malone said that, as with other derby courses, the lot will be soaked with water to reduce traction and increase pandemonium. “We’re hoping that ice will provide an effective substitute for mud and preserve the chaos that derby fans have grown to love,” he said.

Ice won’t be the only thing to set City Market’s derby apart, however.

“The presence of cyclists, strollers and other people not surrounded by tons of metal is really gonna make this one special,” marketing and promotions director Stan Steelworth told the Parmelee Post. “No sign-up is necessary, either. Anyone who happens to be in the parking lot at that time is automatically entered into the derby whether they realize it or not. That's a great way to ensure that participation is high for our inaugural year.”

How to win? The rule is simple: The last vehicle, bicycle or person to remain operational will be declared the champion.

“The winner will receive a month’s worth of organic produce at conventional prices, so the stakes really couldn’t be higher,” Steelworth said. “Instead of fighting over the last open parking spot, shoppers will duke it out for some serious savings, and the competition is fierce.

"There are just so many talented drivers here with absolutely no regard for anyone else’s wellbeing," he continued, "that it’s bound to be an amazing night.”

A limited number of tickets for derby observers will be available at the customer service counter for $5. Proceeds will be donated to the Between the Lines Foundation, a local nonprofit dedicated to teaching drivers how to park like they're not the only car in the lot.

Participation in the derby, however, is free.  Just be in the City Market/Onion River Co-op parking lot at 5 p.m. on Friday, December 9. For those wishing to get in some practice before the main event, just pull in to the parking lot any day during business hours.