The Parmelee Post: Critics: Aging Sanders Lacks the Necessary Drive to be President 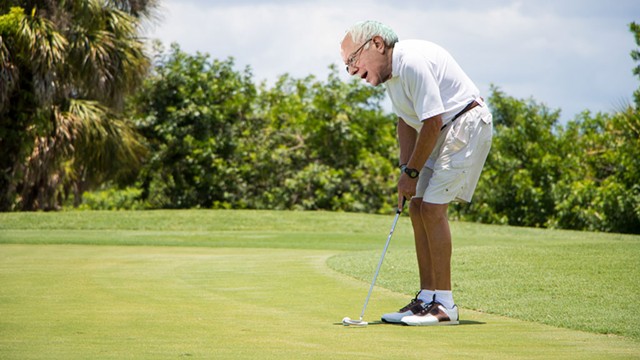 Just days after announcing his second second presidential bid, Sen. Bernie Sanders (I-Vt.) has been accused of being too elderly to rise to the unique challenges of the nation’s highest office.

“By the time he was sworn in, Bernie would already be 79-years-old,” said addition and Gregorian calendar expert Tally Counts. “He may speak of radical change, but at that age it’s highly unlikely he’d actually be able to knock any strokes off his score.”

Whereas Sen. Sanders has already proven himself on the basketball court, his apparent lack of interest in golf is raising serious questions about whether he has the experience necessary to lead the most powerful nation on Earth.

“By current standards, an American president should expect to golf more than 80 times a year — possibly more if there’s a national emergency,” said presidential historian Oscar Mannush. “The ideal president must be willing to risk it all for the country — and by ‘it all’ I mean ‘tendinitis in the elbow.’”

Sanders appears to be in good health, but so far has refused to release any golf score sheets that might provide valuable insight into the quality of his swing.

“This is the first presidential candidate in modern history who has refused to release his golf forms,” says Mannush. “I think Bernie knows damn well he’d be in serious trouble if America suddenly found itself with a commander-in-chief who couldn’t keep his score under 100. It’s why we added a 25th amendment.”

As a self-proclaimed democratic socialist, Sen. Sanders is also raising concerns that his presidency would usher in a “fairways-for-all” model that could spell the end of the private golf course industry.

“How can we expect the affluent class to continue having an inordinate influence over the most powerful leader in the world if we start letting the regulars tee-off right alongside us?”asked Mar-a-Lago member and venture capitalist consultant Theodore Huxley Smith III. “If socialists want to have a voice in politics, they should have been born into obscene wealth and privilege like my father and his father before him.”

Even if Sanders does prove to be a viable golfer, he will still have convince voters that he is healthy enough to endure up to nine hours of “executive time” a day.

“The presidency has changed quite a bit since Sanders first got involved in politics sometime during the Paleozoic era,” said CNN’s Stuphy Hottair. “Sure he understands policy, but the American voter wants to know if he’s ready to sit alone in the White House watching Fox News for half the day."

If fundraising totals are any indication, the public seems to think the ol’ Bern is up for the challenge. But whether or not his campaign can assemble the kind of vast criminal network required to win an American election remains to be seen.