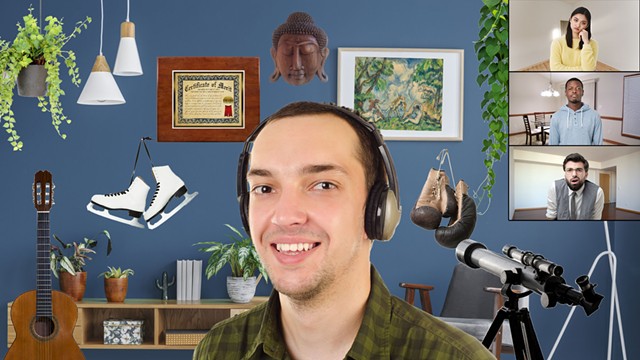 A Burlington man has been accused by his colleagues of trying to create a false impression of the kind of life he leads while working from home.

Coworkers say it’s painfully obvious that Kevin from IT totally rearranged his living room before joining them in a Zoom meeting Monday.

“Not to sound like a dick or anything, but can we talk about Kevin’s apartment real quick?” Carol from production wrote in a Slack channel she created  for the sole purpose of speculating about Kevin from IT's life at home.

“OMG. YES PLS. I didn’t want to be the first person to bring it up!” responded Michael from sales on the newly created Slack channel.

“It’s like he deliberately moved any and all objects that might make him seem remotely interesting into one room for all of us to see,” replied Carol from production.

“It’s nice to see that the guy who called me a ‘malignant tumor’ the last time I loaded the wrong paper into the printer has the face of Buddha hanging up on his wall,” wrote Kristen from finance. “Mindfulness FTW!”

“Seriously, who would have thought that the guy who heads up the Super Bowl squares every year would have a framed print of Cézanne’s 'The Battle of Love’ hanging on his wall,” wrote Michael from sales. “I have so many questions now!”

“Glad to see he remembered to put a guitar in the room too, in case any of us forgot how badly he butchered Elliott Smith at last year's holiday party,” said Kristen from finance.

“Is that a telescope in a room without windows I see?” wondered Peggy, the mild-mannered accountant. “Nothing about this room feels forced at all!”

“I can’t stop staring at the figure skates on the wall,” wrote Michelle from HR. “Feels like I should notify someone, but I have no idea who or why.”

“Ugh, he’s such a weirdo!” typed John from sales.

“Y’all, not to sound all sentimental, but I do kinda miss seeing him in the office everyday,” wrote Jane from marketing.

“I guess if I’m being honest, I do, too,” wrote Carol from production. “Working from home sucks when it’s not by choice!”

“Plus, he makes the best pot of coffee in the entire office,” Michael from sales reminded the Slack channel.

“And he buys more Girl Scout cookies than all of you combined!” wrote Peggy the mild-mannered accountant.

“OK, as soon as this meeting is finished I’m gonna delete this channel,” wrote Carol from production.

“You can’t just wash your hands of this!” countered Jerome the copywriter.

“That’s literally all we can do right now,” responded Carol from production. “OK,  y’all. I’m signing off. Goodbye for now.”