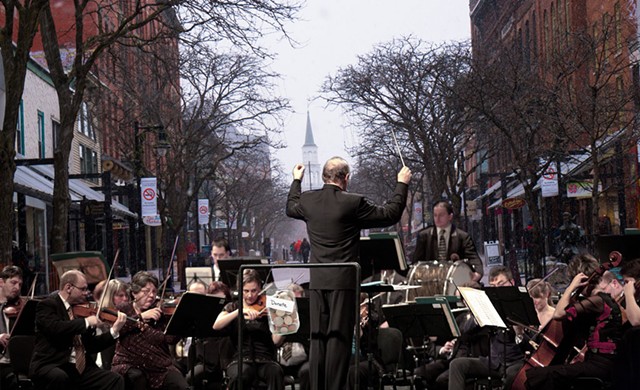 President Donald Trump's recent budgetary proposal to completely eliminate all funding for the National Endowment for the Arts has led some local arts organizations to begin experimenting with new and exciting ways of balancing their budgets.

For example, the Green Mountain Philharmonic Orchestra recently assembled on Burlington’s Church Street Marketplace to perform for shoppers — and hopefully inspire some to consider dropping loose change into a donation bucket.

“It was a bit of a gamble spending the remainder of our 2017 budget acquiring 87 Burlington street entertainer licenses,” admitted executive director Marcus Derrito. “But at this point we really can’t afford to pass up any potential new line of funding.”

Initially, shoppers seemed annoyed at having to navigate around 87 musicians holding priceless instruments to get from store to store. But that all seemed to change once the music began.

“Honestly, I just came down here to buy a salt lamp,” said at-home-homeopathy experimenter Melissa Tumbulini of the Old North End. “But when the music hit everything just seemed to just fall into place. Like, in that moment my life was suddenly complete and I was filled with gratitude for simply existing.

"I never did find that salt lamp," Tumbulini continued. "But I did find my soul. I tossed a couple quarters into the bucket.”

“I waited, like, 20 minutes for that stick-waving DJ to finally drop the beat, but he never did,” said occasional student and full-time dabber Todd “the Bass Head” Chadwick. “Still a pretty dope band, though. I just think their live show could use some more visuals. I for real dropped, like, 78 cents into that bucket.”

A steadily growing crowd coalesced around the orchestra as they began the second movement of Antonín Dvořák’s "Symphony No. 7 in D Minor."

“An intense feeling of love and fulfillment washed over me,” explained retail therapist Bethany Boogle. “I even hugged some random guy wearing a salmon-colored shirt underneath a North Face vest, which is something I would normally never ever do," Boogle continued. Then she added, "I threw an Amazon gift card that still has, like, $3 on it into that bucket.”

“I walked down to Church St. because I was feeling a little down and thought a pair of new jeans might help lift my spirits,” said Jane McWillers of Burlington. “I had never really experienced a live orchestra live before and was shocked at how life-affirming it was!

"I promptly realized that possessions could only provide me temporary satisfaction, whereas a masterwork of art could have a lasting impact on my outlook," McWillers went on. "I dropped 47 cents into that bucket, and would gladly do so once every year if I knew it would make experiences like this possible for others. If only there were a way where that could happen automatically!”

According to Derrito, the orchestra raised roughly $23.62 by the end of the concert, which is almost enough to pay a single bassoonist for the first three movements of a Mahler symphony.

“Honestly, we were hoping to secure a little more funding out there today,” a dejected Derrito admitted. “But it was also our first time playing Church Street and it’s hard to compete with impassioned Bob Dylan covers and a guy in a mask playing a didgeridoo."

Overall, Derrito maintained a positive outlook on the busking experience.

“At the end of the day we were just happy to have brought compelling art to a new audience," he said. "We’re humbled by the fact that people were willing to give less than a tenth of 1-percent of their annual incomes to support art. Because that’s way more than the federal government is currently willing to give us.”