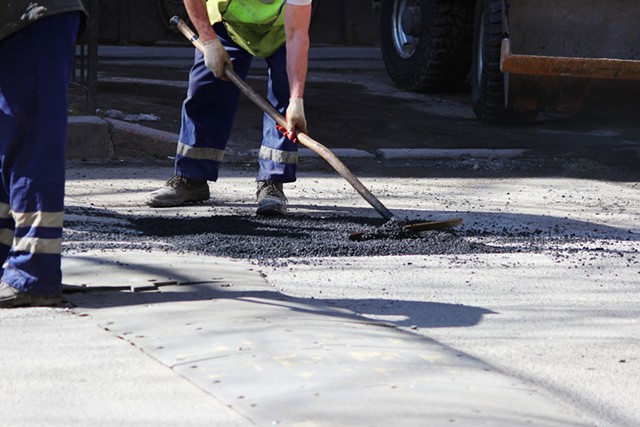 Burlington officials once again provoked the ire of a divided community Friday at a public meeting to discuss commuter safety concerns.

Tensions flared after New North End resident Paulie Wanderscoot held up a series of enlarged before and after photos to prove that the city had recently filled in several potholes along a busy stretch of North Avenue.

“I don’t recall seeing a single ballot item, or even just a simple survey to gather my thoughts on whether we should have filled in those holes,” said Wanderscoot. “I, for one, am sick and tired of this city cramming its agenda down our throats!”

After the resulting rapturous applause slowly faded, Department of Public Works spokesperson Brock Choppin responded that the decision to repair the potholes was actually based on a multi-year traffic study.

“A coalition of state and federal employees, as well as infrastructure specialists, collaborated on this report,” Choppin explained. “The data overwhelmingly suggest that potholes present a grave danger to vehicles, cyclists and pedestrians. I will concede, however, that the study did not predict that residents could be so vehemently opposed to not getting injured.”

That response did little to quell the anger in the room.

“What about the traffic?” shouted Burlington resident Katherine Sonnydai. “Safer roads mean more people will use them, which means mild-to-moderate traffic jams up to twice a day! Burlington has never seen that kind of traffic before! Except maybe on Pearl Street And Pine Street. Maple Street. too. And I guess Battery Street. Well, and Shelburne Road. Definitely on Riverside Avenue. too. And, obviously, Main Street. But still!”

City Councilor Marty Donnright, who recently sent his constituents fliers that read, “The City Is Manipulating You!” said the city is solely to blame for dividing the community.

“This administration has violated the sacred bond of government trust by working behind the scenes to try and make its residents safer,” he said. “I’m all for safety improvements, but not until I double-check with each and every one of my constituents to make sure it’s cool with them first.”

“This city has become so preoccupied with preventing injuries that it never once stopped to consider whether these changes could potentially annoy me,” echoed New North End resident Todd Javawad. “It’s time to overthrow the self-interests of the status quo and bring the focus back to me!”

“Since when is it the government’s job to protect me?” Burlington resident Sarah Valoooooza demanded to know. “I’ll call up the government when I need help losing my health insurance, not to try and 'improve' my roads.”

Moments before the contentious meeting adjourned, Donnright announced plans to introduce an amendment asking councilors for a citywide vote on whether  to re-dig the potholes until a reliable survey can be conducted.

“I’m just doing what I can to restore trust in the government, which is still totally manipulating you with facts and data, by the way,” he said.