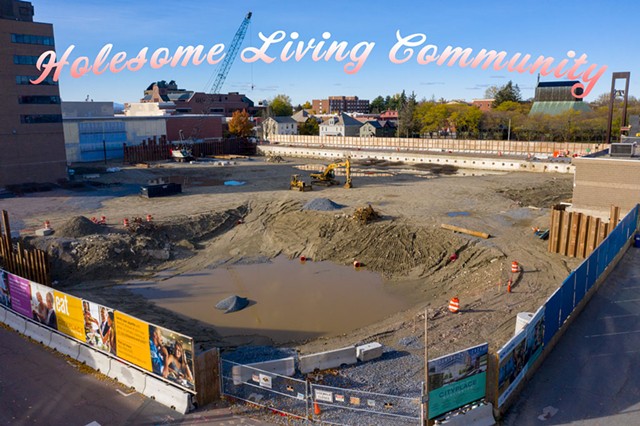 “This amazing piece of real estate will not only help to ease Burlington’s affordable housing shortage, its rental fees will provide the remaining funding necessary to complete my CityPlace project,” he told reporters.

“This unit has a very modern, wide-open floor plan,” he explained. “It is completely free of all the walls, doors and ceilings that make most Burlington apartments feel cramped and overpriced.”

Sinex claims his structureless apartment is the first of its kind and a perfect fit for a forward-thinking city like Burlington.

“Sure it’s unconventional, but when you take a step back and consider the hole picture, this apartment proves my unwavering commitment to this community,” Sinex said. “Nothing builds a sense of community quite like sharing a space with 9,999 roommates and not a single wall.

Sinex also pointed out that the apartment  includes a near limitless supply of dirt, which will provide its inhabitants with a wonderful opportunity to plant a community garden.

When asked how the wall-less space would stay warm during the winter, Sinex touted the apartment’s cutting-edge open-flame rusty barrel heating system.

“Instead of natural gas, tenants will burn discarded city ordinances — a 100 percent renewable resource — inside of  barrels I obtained from Vermont Yankee and repurposed as furnaces,” Sinex explained. “I know how much you Vermonters appreciate some good ol’ fashioned upcycling.”

Critics of Holesome Living Community were quick to accuse Sinex of skirting multiple building codes in a desperate rush to finish the apartment and secure financing for his troubled CityPlace project. But Sinex claims his motivations are purely community-driven.

“It’s all just a bunch of noise,” he said of the project’s skeptics. “Would someone who was only thinking of himself plaster huge photos of himself on billboards around the city?”

Holesome Living Community is now accepting applications with rents as low as $1,200 per month. Pets and smokers will be considered on a case by case basis. For more information, visit plunderburlington.com.