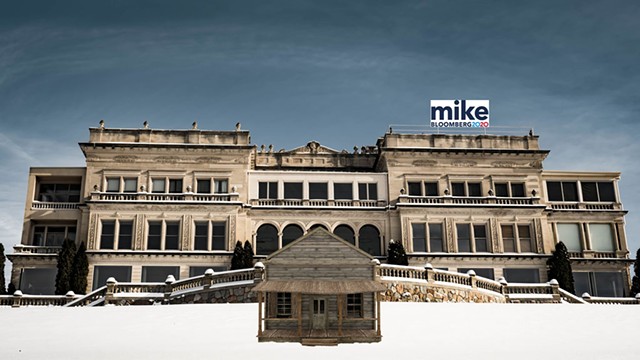 The formerly $600,000, four-bedroom lakeside home now boasts 23 bedrooms, 17 bathrooms and one of Bloomberg’s trademark minority surveillance chambers, the last of which was installed with the help of the New York City Police Department.

“If Bernie thinks wealthy individuals and corporations should have to pay their fair share of taxes just like everyone else, then why did his third house more than quadruple in size since mayor Bloomberg was humiliated on live TV?” asked Mike 2020 campaign spokesperson Annie Thingfomony, referring to Bloomberg's performance in the most recent presidential debate.

Bloomberg initially tried to keep his role in the project a secret, but those plans fell through after he failed to get the entire town of North Hero to sign a non-disclosure agreement. Town officials said the project was streamlined and exempted from the usual permitting requirements because “dude is a billionaire” and “we don’t have those in Vermont.”

A spokesperson for the Sanders campaign said the senator is busy out on the campaign trail and was not aware of the renovations.

“Bernie obviously did not sign off on this project,” said Naomi Uss. “But being that his home is in America and that Bloomberg is a billionaire, the mayor is well within his legal rights to do whatever it takes to feed his insatiable ego.”

The Sanders campaign says the senator will likely put the extra real estate to use by converting it into a free public college or mental health facility.

"When Bernie does sleep, it's usually on the floor in his coveted F.D.R. sleeping bag, so he really has no use whatsoever for a $30 million home," said Uss. "That would require a level of neediness only a billionaire could muster up."

The Bloomberg campaign responded by asking, “If billionaires are so bad, then why is this one spending tens of millions of dollars just to try and make something that loosely resembles a point?”


The Parmelee Post is an occasional series featuring tough investigative reporting on news that hasn't happened.